Is Distillate Taking Over Pre-Filled Cartridges?

Shutterstock.com/underworld
Pre-filled vaporizer cartridges with cannabis oil have evolved since 2014.
Pre-filled hash cartridges are one of the most popular cannabis products to come out of legalization, providing a discreet and convenient way for consumers to toke where and when they want. Butane hash oil has been the dominant variety of cannabis oil used to fill the cartridges since retail sales began in Colorado in 2014, but now distillate, once an expensive treat, is pushing old techniques out the door.

According to dispensary analytics firm BDS Analytics, distillate vaporizer cartridges overtook BHO as the fastest-growing cartridge-filler last February, and they continue to pick up speed. Fairly new to regular cannabis consumers, distillate is a potent form of THC made through a process called molecular distillation, which takes winterized concentrates — BHO or Co2 hash oil refined with alcohol or ethanol and then chilled at extreme temperatures — and then distills them to further concentrate the THC. That extra work has been noticed by consumers: As of November 2017, the monthly growth of distillate cartridges was outpacing BHO and Co2 by approximately $4 million. 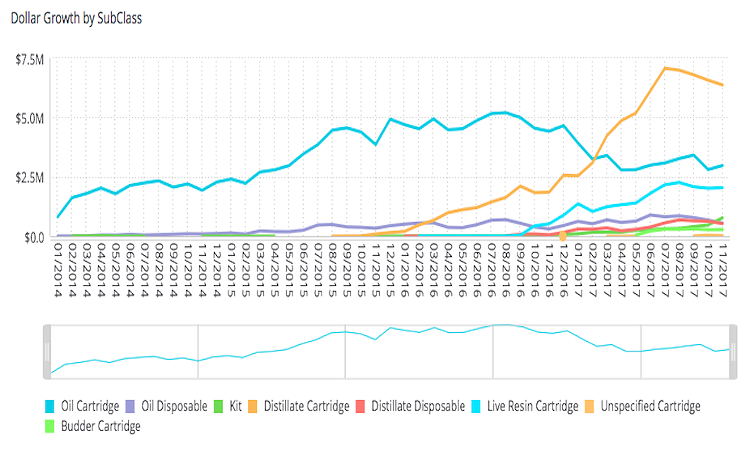 BDS Analytics
Distillation can take BHO or CO2 oil with a 70 to 85 percent THC potency and refine it to upwards of 95 percent, but that's not its only advantage. "Distillate allows you to remove most impurities from the consumable," explains Organa Brands president Chris Driessen, who also oversees Organa's vaporizer brand, O.penVape. Impurities include pesticide and fungi residuals, plant fats and waxes like chlorophyll and other bi-products, he says, all of which can hurt potency, safety and flavor.

Molecular distillation uses different boiling points in cannabinoids to thermally separate them from other plant compounds and extraction solvents; the result is a clear, odorless concentrate. Terpenes, which give cannabis its distinct smell and flavor, are also removed during the process. However, Driessen says this allows extractors to manipulate the distillate into a more flavorful product.

"Not only can you isolate and purify cannabinoids at a high level, but it also allows you isolate the terpenes. That allows for more flavor manipulation, because you add back those terpenes later or any other flavors that aren't even from cannabis," he says. O.pen and other commercial extraction companies have taken advantage of this by creating distillate product lines with flavors like Bavarian cream and watermelon. "For a long of time, that was the knock against CO2 extraction, because you couldn't isolate terpenes — it just kills them off," he adds.

Because it requires purifying a cannabis concentrate, distillate is more expensive to make than BHO or CO2 oil, but decreasing wholesale prices of flower have allowed commercial extractors to buy cheaper pot in bulk amounts, and retail prices have reflected that. "We buy by the ton for our extraction purposes, so we're able to get flower for about $600 a pound," Driessen says. "Because of that, we're able to charge $30 for some of our distillate cartridges."

BHO, which uses butane as a solvent to extract THC from cannabis flower, is cheaper and quicker to produce, but some of the solvent can be left behind after production. Still, Driessen doesn't think BHO cartridges will be taken off dispensary shelves anytime soon — but they will lose space. "It's a just lower-quality product, and it's become antiquated," he explains. "It still has a foothold in the market — albeit a declining one — because it's the cheapest to make."

Consolidation has also played a factor in decreasing costs and rising distillate sales. According to Driessen, there were 85 pre-filled vaporizer companies in Colorado last July; today there are 48. "That's happening throughout the Colorado market, whether it's dispensaries, cultivations or extractors," he says. "There's always something new: a device, hardware, extraction process. You've got to be ready for it."