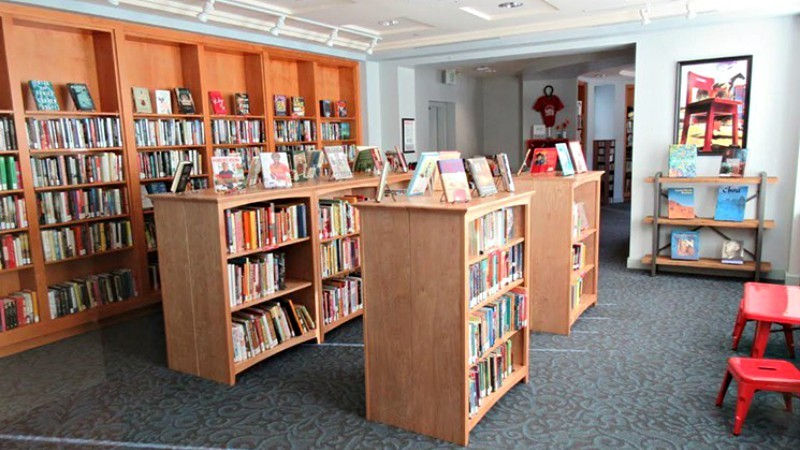 File photo
The Denver Library's central branch was the site of at least six overdoses during the first three months of last year.
Editor's note: The safe-injection pilot program bill discussed in this post has been withdrawn from consideration at the Colorado general assembly. Learn more in the post "Will More Heroin Addicts Shoot Up at Library After Safe-Injection Bill's Death?" Continue for our previous coverage.

Original post: Yesterday, February 5, Democratic lawmakers reportedly withdrew a bill from a committee in the General Assembly that dealt with safe injection sites for intravenous drug users. That's no doubt a disappointment for Colorado House District 8 Representative Leslie Herod, whose recent tour of North America's first supervised injection site confirmed her belief that centers like it can be an important way for Denver, and Colorado as a whole, to address the growing heroin and opioid crises, especially given where injection drug users in the Mile High City have been congregating in the absence of such a facility.

"We already have a safe-use site in Denver," Herod told us late last month. "It's operated illegally, and it's operating because of need. That's our Denver Public Library" — specifically the central branch at 10 West 14th Avenue Parkway, where six people overdosed during the first three months of 2017 alone — "and it's a huge problem. We need to move that population away from the library, and away from the bathrooms in coffee shops and restaurants, and move them to a place where they can get connected with services."

Late last year, we asked the Drug Policy Alliance's Art Way to analyze a series of six opioid bills proposed for the current legislative session, and he was particularly enthusiastic about one summarized like so: "Create a pilot project for a supervised injection facility in Denver. Like needle-exchange programs, data show that SIFs do not increase the use of illicit drugs, but do reduce the spread of diseases like HIV and hepatitis C while increasing referrals to medical and/or substance abuse treatment."

"Three or four years ago, people would look at you like you were crazy when you'd bring up something like supervised injection facilities," Way told us. "That's one thing about this epidemic. Because of it, we were able to cut through the BS a lot quicker than we would have if it wasn't for the fact that soccer moms, and their sons and daughters, are now dealing with the opioid issue."

Injection booths at Insite, a supervised injection site in Vancouver recently visited by a delegation from Denver.
Facebook
For more information about such centers, Herod traveled in January to Vancouver to visit Insite, which is described on its website as "a supervised drug injection site accessible to street drug users. Insite has injection booths where clients inject pre-obtained illicit drugs under the supervision of nurses and health care staff. Clean injection equipment such as syringes, cookers, filters, water and tourniquets are supplied. If an overdose occurs, the team, led by a nurse, are available to intervene immediately. Nurses also provide other health care services, like wound care and immunizations."

Herod, who was accompanied by fellow representative Brittany Pettersen and a delegation of Denver city officials, health-care professionals and folks from law enforcement, came away impressed by what she saw.

"Vancouver has been particularly hard hit by the opioid crisis, and the city has put in place a lot of interventions to keep overdose deaths down," she said. As for Insite, "the nurses and people on hand are trained on Narcan and other medications to reverse overdoses. We found that very interesting."

She acknowledged, "This was not the first time I have seen someone who was under the influence of heroin and who had maybe just injected — but we weren't on tour to put people on display. There wasn't a lot of watching someone put something in their arm. Instead, we watched people getting access to treatment and access to caseworkers. We spoke to the medical staff, who were doing everything they could to help people in Vancouver who were deep in their addiction, who were a little lost and needed help."

As evidence of Insite's success, Herod noted that "the facility has had over four million visits since its inception, and they've had zero overdose deaths either on site or in transport to hospitals. That's important, because that shows people are living — and they're able to take that next step into recovery."

Representative Leslie Herod serves House District 8.
greaterparkhill.org
Denver already has "a needle-exchange site right across the street from the State Capitol," Herod pointed out, "and they're saving lives. But I believe we need to take that a step further. With safe-use sites, we'll be able to keep people from overdosing and dying. And by tying a facility to one that's already doing needle exchange, we'd have a staff that's already been trained and that's been working with the population we're looking at servicing."

Not everyone on the junket was quite ready to back the immediate opening of a center. Bob McDonald, executive director of Denver's Department of Public Health and Environment, corresponding via email, wrote that the "trip to Vancouver provided an in-depth perspective on how they’re dealing with this important issue." He added, "We will continue gathering information and taking a thoughtful look at what's right for Denver in the face of a significant opioid and drug-addiction crisis." And at a press conference yesterday, state senate president Kevin Grantham described his antipathy toward such facilities like so: "I can’t keep my mind wrapped around creating these enclaves of places where illegal activity is brushed under the rug."

For Herod, however, the wisdom of building a safe-use site in Denver is already clear.

"This is a public-health issue and it should be treated in a public-health way," she maintained. "We definitely saw people who needed help and who got access to that help, and here in Denver, we need to do the same thing. This isn't a standalone issue: It's part of a comprehensive effort to address addiction and abuse in Colorado. We're looking at everything from prescriptions to in-patient treatment to outpatient treatment and recovery to prevention and stopping the supply. But this is one major piece. We must treat people like human beings and move them toward recovery."

She stressed that "this is about saving lives, and it could be anyone. Addiction doesn't discriminate on the basis of race or socioeconomic status. It could be your mom, your kid, yourself. It's really affecting us all. So we need to come together as a community to say, 'We must address this. We must address this now.'"