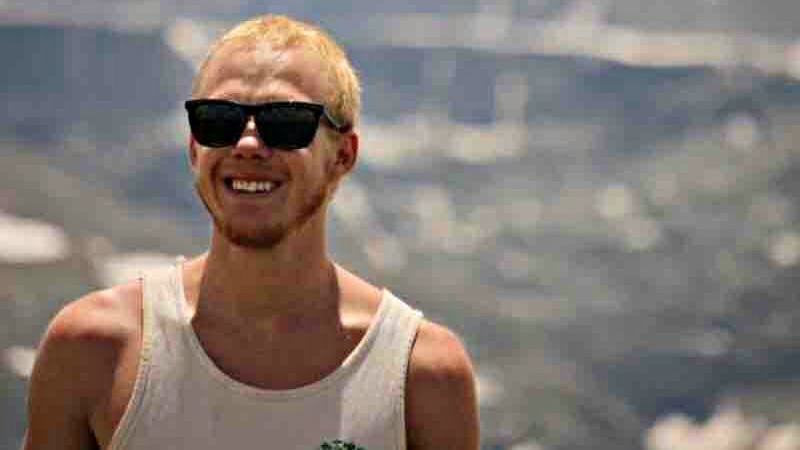 GoFundMe
A photo of Abel Palmer included on a GoFundMe page created to benefit his family.
According to a just-released final report from the Colorado Avalanche Information Center (CAIC), 27-year-old Durango resident Abel Palmer did almost everything right on January 21, when he and a companion chose to partake in some backcountry skiing between Red Mountain Pass and the Town of Silverton, in an area known to locals as Sam's Trees. But one small mistake, during which he accidentally entered an area he hadn't planned to enter, led to him becoming the first person in Colorado to die in an avalanche during 2018.

CAIC has long been an indispensable resource when it comes to better understanding the circumstances of fatal avalanches. But its analysis of the Sam's Trees accident is the finest and most comprehensive look at such an incident we've seen from the organization, as evidenced by photos from the scene and a video shared here.

The report notes that "this was a skier-triggered, soft slab avalanche that was medium-sized relative to the path and had the destructive force to bury, injure or kill a person. The avalanche failed on a layer of faceted, early season snow near the ground, and released the entire season’s snowpack."

The crown face of the avalanche was approximately 18 to 22 inches deep and 240 feet across.

Graphics on the following CAIC photo show the accident location ringed in red, with the yellow circles designating avalanche activity. 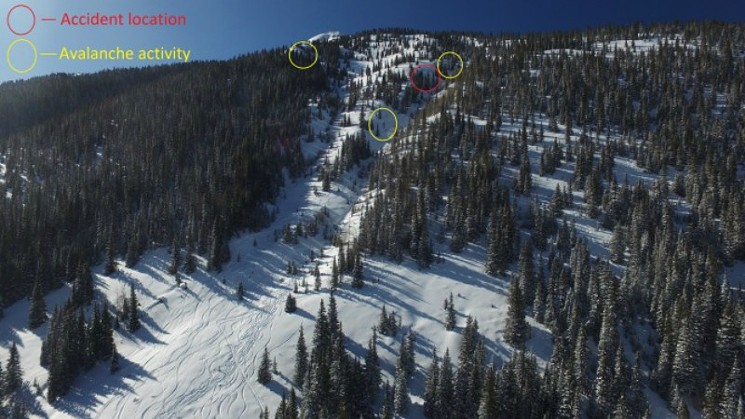 Colorado Avalanche Information Center
Weather at the accident site, whose elevation tops out at 11,070 feet, was mild and dry in the days prior to the accident. But this period was preceded by a notable system.

The week of January 7 to 14 was the stormiest of the season to date, the CAIC points out, with 43 inches of snow measured at the center's Red Mountain Pass study site, located about a mile north of where the avalanche occurred.

But before this stretch, snowfall was at a historically low level, generating only 17.5 inches of the white stuff for November and December combined.

The result was a large amount of new snow atop a thinner layer of older stuff, leading to a scenario where an avalanche "could easily propagate along the slab weak-layer interface," the report points out.

The following video provides visuals to these findings.


During the weekend in question, breeziness was the rule. On the morning of January 20, the Winds at the Eagle automated weather station, placed atop a ridge above where the accident took place, recorded southerly gusts with hourly averages of between 10 and 45 miles per hour. The next day, the wind shifted to the northwest, blowing at a steady 20 to 30 miles per hour in the morning, with bursts of 34 to 53 miles per hour as the day wore on.

Palmer and his companion arrived at the Purgatory Ski Area near Durango at around 10:10 a.m. on the 21st and drove up to Red Mountain Pass together. En route, they examined the CAIC forecast and "developed a plan for where they would tour based on current conditions" — the sort of advice recommended by the center's Scott Toepfer for a 2017 Westword collection of ten avalanche safety tips.

In the end, Palmer and his pal chose Sam's Trees as their chosen spot. There had been avalanche activity on January 10 and 11 there, during the aforementioned storm. But they were reassured by a successful beacon search, as well as the presence of other vehicles parked at the trailhead, which suggested that others had determined that the area was safe.

As the pair headed downhill, Palmer's friend accidentally released a small avalanche without his knowledge, the study continues. However, Palmer saw what happened and quickly passed along the information. They then huddled and re-evaluated their plan, deciding to move down what's described as the "center rib" of the mountain in order to avoid a gully to their left.

Upon restarting, the skiers leapfrogged each other a number of times before the friend stopped at a group of trees. Palmer skied past him and accidentally drifted left of the center rib, winding up in the very gully they'd hoped to avoid. Palmer stopped and his friend headed to the presumed location, only to feel and see "snow flowing around his legs, pushing him downhill," the narrative maintains. 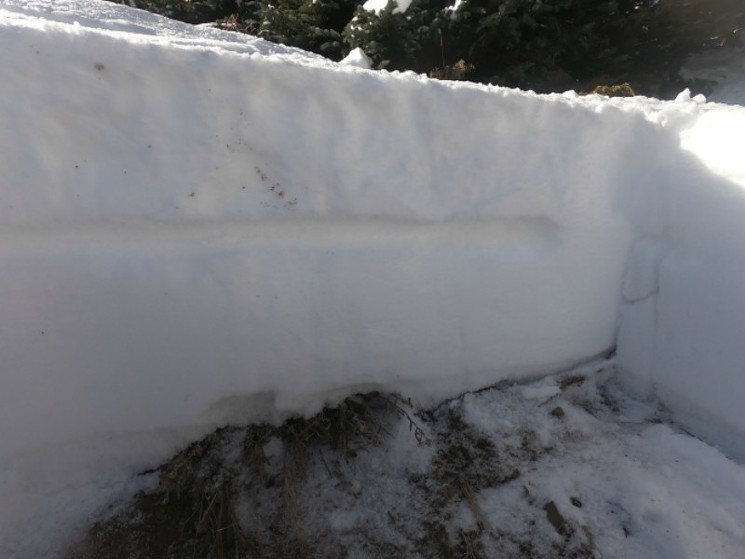 This photo conveys the depth of the snow in the avalanche area.
Colorado Avalanche Information Center
The friend was able to ski out of the resulting slide and grab a small spruce tree for support after about fifty or sixty feet. But he lost sight of Palmer. The time was 1:20 p.m., and when he tried calling 911, he discovered he didn't have cell service — a common issue in the mountains.

It took only eight minutes for Palmer's friend to find him. He was buried face up, with his head about three feet below the surface, the report states. The friend began to perform CPR, but Palmer was unresponsive, and efforts to assist by other skiers who heard his companion's calls for help were also unsuccessful. Search-and-rescue personnel weren't able to reach the scene until 4:40 p.m., and by then it was too late.

In the comment section of the report, the CAIC notes that Palmer and his friend had been cautious in advance of their day of skiing but "still ended up in terrain they had planned to avoid. There can be many reasons for this: bad visibility, the lure of powder, losing orientation on the slope. ... Whatever the reason, it is not an uncommon experience for backcountry travelers."

After Palmer's passing, a GoFundMe page was launched to raise money for the memorial and associated costs. Its introduction reads in part: "Abel Palmer was an amazing, bright young person who was taken from this earth too soon on January 21st, 2018. Abel was an avid outdoor enthusiast, with an amazing love for life that he shared with everyone he met. Abel will be greatly missed by everyone who knew him."