Haykin Family Cider Proves That Colorado Does More Than Beer

Mark Antonation
Haykin Family Cider opens on February 1 in Aurora.
With names like Cox's Orange Pippin and Esopus Spitzenburg, the sparkling beverages pouring from Champagne-like bottles at a new Aurora tasting room might be hard to identify — unless you're an apple aficionado. Both are the products of Haykin Family Cider, which opens to the public at 12001 East 33rd Avenue on Thursday, February 1. Owners Daniel and Talia Haykin plan to showcase the flavors of heirloom apples grown in small Colorado orchards with their dizzying lineup of bottled ciders.

"We view apples in the same way that winemakers view grapes," Daniel explains. "We know all of our own apple growers — they're all from Colorado."

The Haykins began making cider at home several years ago; what started out as a hobby with a few gallons of juice purchased from a roadside stand turned into an obsession that resulted in a first-in-class award, two gold medals, six silvers and six bronzes at the 2017 Great Lakes International Cider and Perry Competition, the largest and most important cider competition in the world. That was while the Haykins were still amateurs and not yet producing ciders in a commercial operation.

Daniel Haykin pours samples of his single-varietal cider.
Mark Antonation
But last fall they began production at their new facility in preparation for opening to the public. Daniel and Talia buy apples primarily from Ela Family Farms in Hotchkiss and Masonville Orchards in Fort Collins. Unlike many modern cider producers, Haykin does not buy juice or concentrates, but brings in whole apples that are crushed in a press capable of holding up to two tons of fruit. Most of the batches are much smaller, though. Daniel says sometimes a planting of a specific varietal yields only 100 pounds of apples, so in addition to large commercial fermenters, there's also a temperature-controlled fermenting room filled with glass carboys, each of which holds only five gallons of juice.

So while he aims to have several varietals available as regular offerings, smaller batches may produce only a case or two of special bottlings. Right now, the tasting room's case is filled with bottles labeled Winter Banana (an actual apple varietal, named for its distinct banana flavor), Ruby Jon, Akane, Rome Beauty, Harrow Sweet, Fuji, and the aforementioned Cox's Orange Pippin (one of Great Britain's most popular dessert apples) and Esopus Spitzenburg (a favorite of Thomas Jefferson). Several more varieties are also available on tap. 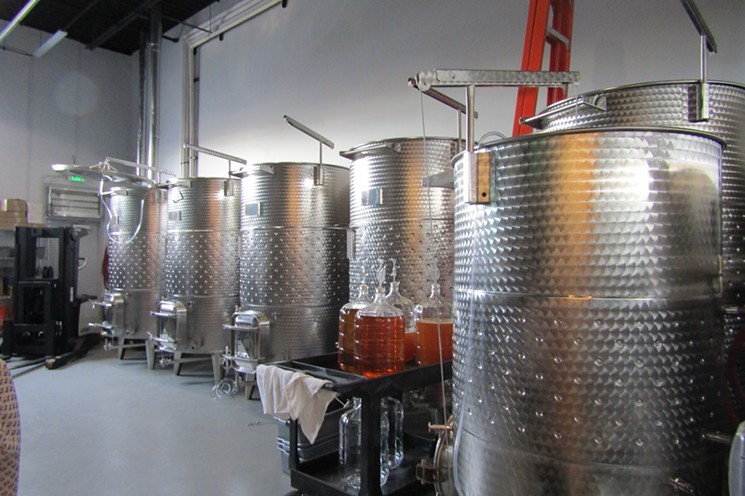 Cider fermentation tanks at Haykin Family Cider.
Mark Antonation
The similarities between artisan wines and the Haykin Family Cider can be seen in other ways. Like all American cider companies, Haykin operates under a wine license, which allows them to ship bottles directly to thirty states. Daniel and Talia use white-wine yeasts to ferment their ciders, and they package the products only in thick 375- and 750-milliliter bottles with sparkling-wine cork-and-cage stoppers; the higher pressure and natural carbonation mean that beer bottles or cans simply won't do. The only things that go into the cider are apples and yeast; the Haykins don't plan on making flavored ciders and don't use preservatives or other adjuncts. The facility has also been certified kosher to give the Jewish community in Denver and Aurora a place to appreciate locally made alcoholic beverages.

Haykin ciders are closer to sparkling wine than beer.
Mark Antonation
Haykin began selling cider at three liquor stores in December and plans to slowly grow the list of bottle shops and restaurants that carry the cider, while also providing a tasting room that will be open to the public on Thursdays and Saturdays from 5:30 to 9 p.m. Daniel explains that growth will be slow and measured to ensure that they don't run out of cider; like winemakers, he buys apples during the harvest season, so he doesn't produce cider year-round (the last of the 2017 harvest is still fermenting in carboys, but the vast majority of apples have already been pressed, fermented and bottled).

For more information on where you can by Haykin Family Cider, visit the company's website, or stop by the tasting room to sample and purchase a few. You might be surprised at the range of dry, sweet and tart ciders with natural flavors — from banana to stone fruit to pomegranate — that develop through the fermentation process. Even the same apple varietal grown in two different Colorado orchards can result in markedly different flavors, a result of the state's surprisingly good apple-growing climate and the dedication of its farmers. "We're proving that they're growing an international-quality product," Daniel notes. And Haykin is proving that Colorado cider can be an international-quality drink that can stand up to the best in the world.