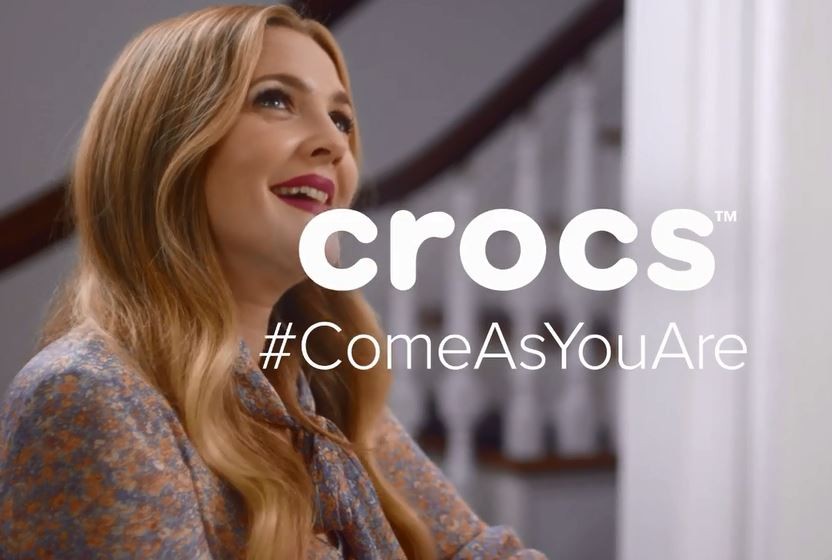 Facebook
That's right; she's thinking about Crocs.
Can we call it a comeback? Niwot-based shoe company Crocs recently announced the launch of a new line of the eponymous footwear, a signature collection by noted actress and shoe-wearer Drew Barrymore, called The Drew Barrymore Hearts Crocs Color Block Collection. Except the “Hearts” is really just the heart symbol, because 2018 and because texting and because the death of language.

Can Drew Barrymore make you want to wear Crocs? Most accept that the fad has come and gone, and we’re back to Crocs being utilitarian again — fine for the beach, or the pool, or while gardening, things like that, but probably not what one might call haute couture. Barrymore (not to mention the Crocs company) wants to change your mind. Admittedly, Crocs had something of a moment in 2017, but couldn’t really capitalize on the wave of Bush-era nostalgia (if such a thing exists yet, or ever will). So Barrymore may be a draw; the jury is still out. What could once and for all bring Crocs roaring back into the hearts of Americans? Here are some modest proposals.

This list may be facetious, but this cause? Not at all. Give if you can.
Phoenix Rescue Mission at Flickr
7. Make them recyclable
Like, actually recyclable. The patented light-foam construction material of traditional Crocs might remind you of those biodegradable packing peanuts that are essentially un-powdered cheese puffs, but it's far from it. Not only is it not biodegradable, but it’s also not recyclable with other like plastics. It is essentially landfill fodder. Of course, Crocs has done its best to offset this built-in negative by first creating Crocs Cares, which took in old shoes and refurbished them to give away to the needy. When that program ended (the link on the website is dead, and the company hasn’t talked about it in years), Crocs partnered with Soles4Souls, which accepts “gently used” shoes, including Crocs, to disseminate to those in need. Both admirable programs, but the fact remains: Crocs just aren’t very earth-friendly, despite the company's ad campaigns. Fixing that would be a re-branding coup waiting to happen.

It's a box full of expensive Crocs. Red bottoms and all.
Rachel Hinman at Flickr
6. Offer a free beach with every pair
How do you create demand? By limiting supply. And one way you limit supply is by making the shoes both exclusive and expensive — because each pair comes with a five-foot-by-seven-foot strip of a beach, just big enough to lay out a towel, maybe in Texas, maybe in Mexico or Central America, maybe somewhere else in the world where land prices are within the realm of pricey and not ludicrous. Buy some Crocs, buy a vacation spot; sell them for Louboutin-like prices, and see the profit margins climb with the cultural notoriety. Now you, too, can humble-brag about your beachfront property in Costa Rica.


5. Advertise that they’re made with Rocky Mountain spring water
Hey, it’s worked for years for the Coors family.


4. Two words: moon Crocs
Remember moon shoes, those bouncy-castle-things you could strap to your feel when you were a kid? (Or if you’re older than a ’90s kid, you might still recall them — they go as far back as the ’50s, when they were made out of metal springs.) If Crocs could duplicate that technology, who could resist? Listen, I don’t care if Crocs look even worse when they’re three times bigger: If it feels like I’m walking on mini-trampolines with every step, count me in.

Guardians of the Crocs Galaxy.
Westword illustration
3. Celebrity endorsement by the Guardians of the Galaxy
No offense to the lovely and talented Drew Barrymore, but let’s be frank: What audience is she bringing to the table with her representation? Fans of The Wedding Singer? No, her manic pixie dream girl persona won't attract an audience that could today be called “cool.” But superheroes are pop-culture hot, and Chris Pratt and Zoe Saldana and Bradley Cooper (who admittedly is a raccoon, but still) are all pretty cool, and Marvel’s Guardians movies are actually era-nostalgic already (’70s music, ’80s movies...why not early-2000s style?). If anyone can bring Crocs back with an effective mix of zeitgeist, irony and actual awesome, it’s the Guardians of the Galaxy.

Crocs already come in orange and blue, so...
Ken Lund at Flickr
2. Crocs Stadium at Mile High
Hey, it’s a Colorado-based company, and the stadium is looking for a buyer for naming rights, and…wait, would that mean that we’d be reminded of plastic shoes every time we went to a football game? That the logo would become synonymous with the Broncos? That we’d have to bring the Rocky Mountain Thunder…in Crocs? Yeah, on second thought, forget this suggestion. Please.

Not just a circle of Crocs, it's also a cry for help.
Kathryn Greenhill at Flickr
1. Time travel
Granted, if you had the chance to go back in time, you might not choose 2006…but if you did, you’d find that America was Croc-alicious. And for one brief, shining moment, cool.