“With all respect, sir, may I ask, who are you?”
“What you see before you is a man, a simple monk.”
“Are you the Lord Buddha?”
“I believe I am a reflection, like the moon on water. When you see me, and I try to be a good man, you see yourself.”

That exchange concludes Martin Scorsese’s 1997 film Kundun. The man asking the questions is an Indian border guard; the man answering is the exhausted and injured 14th Dalai Lama (Tenzin Thuthob Tsarong), who has just made an arduous and deadly trek overland to flee Chinese-occupied Tibet. An expressionistic, dreamlike biopic, Kundun, not unlike Scorsese’s notorious 1988 epic The Last Temptation of Christ, concerns itself with the terrifying pull of divine destiny. Now, with the release of the director’s ambitious religious drama Silence, adapted from Shusaku Endo’s 1966 novel, Kundun's final moment gains even greater resonance. If the two earlier works are about seemingly ordinary men coming to terms with their own holiness, Silence shows a holy man coming to terms with his own ordinariness.

The three films inform and expand on each other. Plucked from obscurity as a young boy and deemed the reincarnation of Tibet’s spiritual leader, the Dalai Lama spends much of Kundun agonizing over the weight of his position. Once the Chinese invade, he slowly realizes that he and his government must flee — much to the dismay of his countrymen, who want him to stay and lead what will surely be a bloody, futile fight. In Last Temptation, Jesus (Willem Dafoe) has to struggle against a very different fate. He is pursued at every step, even hounded, by the presence of God, driving him towards his death on the cross. (“God hunts me. He drives his nails into my heart.”)

And Jesus protests — he fights, he begs to be spared — until the film’s controversial final act, when he appears to have been given a reprieve: A young angel arrives with a message from God and removes him from the cross. Jesus takes on a wife and raises a family. It is only as an old man, lying on his deathbed, that he realizes that the young angel was actually the Devil, and that his abandonment of the cross has doomed mankind. Jesus begs God once again, but this time, he asks to return to the cross. “I want to be the Messiah!” he cries. The whole movie has been a journey towards Jesus not just accepting, but desiring — demanding — his ultimate fate.

Scorsese's Jesus is effectively pursued by God; throughout the film, he’s hounded by voices, invisible figures and agonizing pain. The Dalai Lama is pursued by tradition, ritual and revelation: Kundun is filled with beautifully filmed depictions of elaborate Tibetan ceremonies, dream sequences and apparitions, all set to Philip Glass’ ethereal, pointedly repetitive score. It might be Scorsese’s most stylized work, as it portrays a man trying to navigate a world bursting with voices and visions, a world headed in a direction he can’t change. Even the hero’s own self turns on him, in a way.

Courtesy of Universal Pictures
In one of the most haunting moments, the young Dalai Lama’s advisers read him a letter from his predecessor warning of what might happen if the Chinese invade again: “It may happen that, here in Tibet,” they read, “religion and government will be attacked, the monasteries may be looted and destroyed and the monks and nuns killed or chased away.” Clearly rattled, the young leader asks, “What can I do? I’m only a boy.” His advisors’ response is both chilling and heartbreaking: “You are the man who wrote this letter. You are the man who’s come back to lead us … You must know what to do.”

Neither this Jesus nor this Dalai Lama find it easy to become sacred figures. In this, their destinies stand apart from those of mere men — their struggles are unique, their responsibilities immense, their fates solitary. But where, in all this, do we find the ordinary person of faith who is not a figure of veneration, or a prophet? That’s where Silence comes in. The title refers to God’s silence amid the characters’ suffering — and the fact that Andrew Garfield’s Jesuit missionary Father Rodrigues feels increasingly abandoned and alone as he sneaks across this hostile land. Scorsese makes the silence palpable, the need for deliverance primal. In the early scenes, encountering Rodrigues in the thick mist and dark caves of medieval Japan, the Japanese Christians make the sign of the cross with all the desperation of drowning men gasping for air. Rodrigues feels a great duty to these people, and to preaching the Gospel in this foreign place where Christians are persecuted and put to death.

But there’s a vanity behind Rodrigues’ sense of responsibility, too, and Silence slowly interrogates this earnest man of the cloth. Once he gets separated from fellow priest Garrpe (Adam Driver), Rodrigues is accompanied through the film by two key figures. One is the unchanging, ever-present face of Jesus, about whom he dreams at night. The priest even sees Christ’s visage replacing his own reflection in a pool of water, and he giggles maniacally at the thought that he might be headed for a fate similar to his messiah's; he exults in the glory of a martyr’s death.

The other figure is Kichijiro (Yôsuke Kubozuka), a ragged, weak-willed Christian who has been constantly forced by authorities to renounce his own faith and who cannot shake the pain of his betrayals. Though he’s often cast away and rejected, Kichijiro keeps showing up, unwanted, and always asks for Rodrigues to hear his confession. The first time Father Rodrigues does so, it’s from a position of superiority — as a Western priest who supposedly understands faith better than this lowly, ignorant man. The next two times he hears the confession, however, Rodrigues does so reluctantly, in disgust — he wants nothing to do with this creature who has already betrayed him. (“Father, how could Jesus love a wretch like this?” Rodrigues asks in voiceover. “He is not worthy to be called evil.”) Rodrigues seeks and emulates Christ, but shuns Kichijiro. 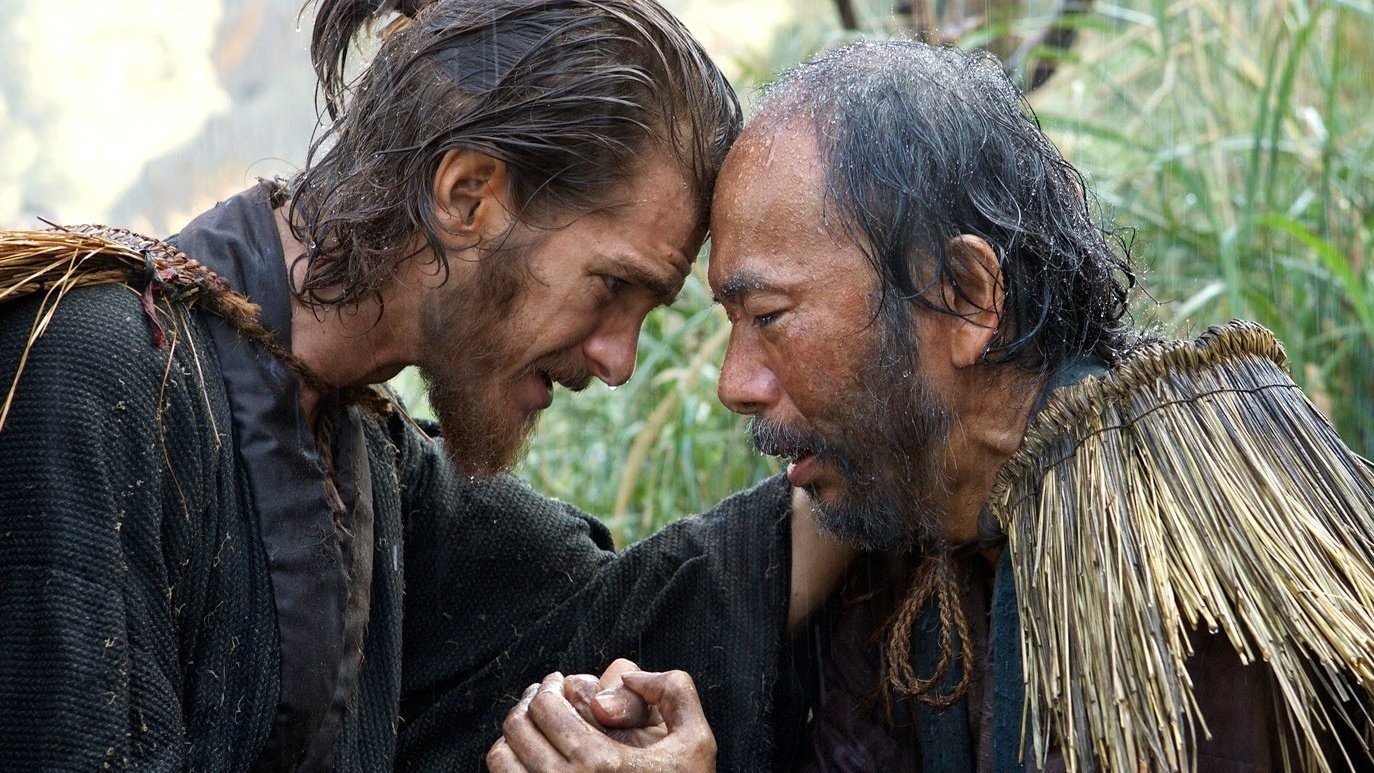 Silence
Courtesy of Paramount Pictures
But then, near the end of the film, the tables are turned. After Rodrigues finally renounces his faith and steps on the image of Christ, the authorities relent, allowing him to live and, some years later, take on a Japanese name and family — just so long as he exhibits no connection to Christianity. Eventually Kichijiro returns to him, and begs yet again to confess. Rodrigues protests, saying he is no longer a priest, but Kichijiro insists. And finally, the two apostates confront each other as equals — two men who have been similarly broken. At long last, Rodrigues has true compassion for this man, and understands the true meaning of his own faith. Rodrigues even hears God speak at this point, saying, “I suffered beside you. I was never silent.” (In the screenplay for the film, Rodrigues initially thinks that it is Kichijiro saying these words — thus uniting his seemingly opposite companions, the lowly apostate and the martyred savior.)

These late moments in Silence culminate what one might loosely consider Scorsese’s trilogy of faith. About halfway through Silence, the captive Rodrigues has a conversation with the Japanese Interpreter (Tadanobu Asano) about the difference between Buddha and Jesus. “Only a Christian would see Buddhas simply as men,” the Interpreter tells Rodrigues. “Our Buddha is a being which man can become. Something greater than himself, if he can overcome all his illusions. But you cling to your illusions and call them faith. Your Creator is all-loving and all-merciful, so you believe. Then why does he give people so much suffering on the way to heaven?”

The Interpreter’s words could serve as an outline of Scorsese's earlier religious epics: His Dalai Lama overcomes his illusions in becoming something greater than himself, while his Jesus, in the grips of great pain, must transcend an illusion — and his human desires — to embody God’s love and mercy. But consider how this conversation finds its echo in the film’s finale. Rodrigues unites these two ideals: He has indeed overcome all his illusions and, in his last interaction with Kichijiro, attained a level of love and mercy greater than anything he had previously achieved — in part through his own disgrace. Overcoming one’s illusions is suffering. But beyond it, one can find a greater kind of love. Recall those closing lines of Kundun, in which the exhausted, broken, limping Dalai Lama had reduced his divinity to its essence: “When you see me, and I try to be a good man, you see yourself.”

Scorsese is a Catholic, and he’s been obsessed with Catholic imagery his whole life. But he also exhibits a more universal understanding of faith. Silence takes the trajectories of Jesus and the Dalai Lama, who must learn to accept their immense, sacred responsibilities, and reverses them in the story of Rodrigues, the priest who embarks on a holy mission and is ultimately stripped of everything he values. Rodrigues will not die a martyr. He will not become a saint. His sacrifice will not be written about in the annals of his faith; if anything, he will be a shameful footnote. But he will, finally, achieve true compassion for another man, the two of them united in their weakness. And in this, who’s to say that he has not found the divine?