In His Blood: The Blackcoat's Daughter's Oz Perkins on Crafting His Standout Horror Films 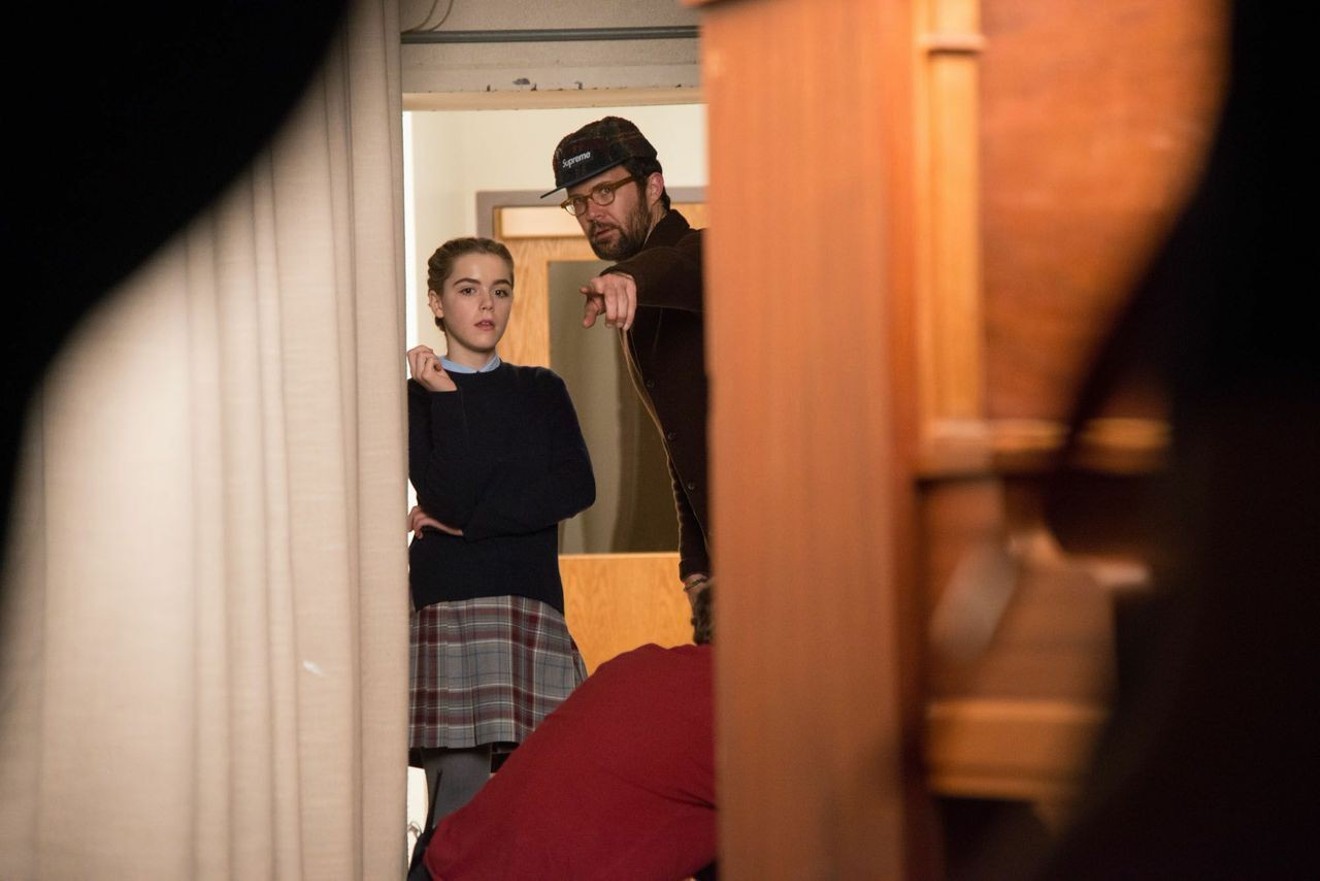 Kiernan Shipka and Osgood Perkins. Photo by Petr Maur, courtesy of A24.
The Blackcoat’s Daughter is available on demand. I Am the Pretty Thing That Lives in the House streams on Netflix.

When writer/director Osgood "Oz" Perkins asked his musician brother Elvis to score his first film — a demonic-possession horror pic starring Kiernan Shipka, Lucy Boynton and Emma Roberts called The Blackcoat’s Daughter — Elvis, he says, was “cavalier” about it. Elvis expected to learn the process through doing, and Oz was confident he’d figure it out. After all, the brothers are a kind of horror royalty, their late father Anthony having played the iconic mama’s boy murderer in Psycho. The two grew up on the sets of the sequels, Oz even playing a young Norman Bates once. Still, after months of screwing around on instruments to collect tense and unsettling sounds — scoring the story of a girl who’s courted by the devil when her parents suddenly die as she’s stranded at her boarding school — Elvis’ psyche was shot.

“At a certain point in trying to pull this thing off, I actually downloaded Bernard Herrmann’s Psycho score, and I flew it into the section I was working on,” Elvis says. “I was like, ‘How can you help me?!’” He tried slowing Herrmann’s music down, reversing it, slyly manipulating it in so that maybe only a listener’s subconscious would recognize it, but realized eventually “it wasn’t going to save me.” Still, that spirit of the music is there, “lurking muted somewhere,” just as their father’s spirit is on everything they do.

The brothers have endured tragedy in their lives, first with the death of their father from AIDs-related pneumonia in 1982, then with the sudden death of their mother Berry Berenson, who was on Flight 11 in the 9/11 attacks. But rather than shy from their painful past, they’re running toward their father’s legacy with open arms and the same dark, absurd sense of humor they saw in him, something of a coping mechanism for grief.

Oz says his dad wasn’t the type “to be, like, ‘Come sit on my lap and I’ll demonstrate the Alexander technique.’” But the son was able to soak in his father’s artistry by watching him perform and direct on stage and screen.

“Every time I watch Psycho, it’s always striking to me that performance,” Oz says. “It’s out of time, like Brando in On the Waterfront. Brando’s sort of doing his own movie and everyone else is five years ago — my old man has that too.”

With The Blackcoat’s Daughter, Oz, like Elvis, was learning as he went, drawing inspiration from how his father ran a collaborative set on the first film he directed, Psycho III, where even grips were invited to offer input on Anthony’s character. On the Blackcoat's set, amid a blisteringly cold Ottawa winter, Oz wanted to bring that same ethos. He remembers a serendipitous moment when the hair and makeup team revealed a tight, “Geiger-like” braid on Shipka, and although he’d never requested this exact hairstyle, it was everything he had hoped for but couldn’t quite articulate. He thinks the crew’s grasp of just what he wanted might have come from his unorthodox script.

“I tend to write everything that’s going to be on the screen and some of what can never be on the screen,” Oz explains. “There’s a lot of detail — visual, auditory, camera moves — fully baked into the shooting script, as well as feeling, the suggestion of what this experience might be like.”

This process is a departure from the established rules of screenwriting, which dictate that the writer must be as invisible and vague as possible. Oz thinks that even though some old-school industry execs might not want all those extra words and poetry, that “feeling” got his crew on the same page for the film’s tricky tone, which balances wry humor and dread. And it got the picture cast — Emma Roberts read the script and responded immediately that she had to do the film. Oz had the same experience when casting Ruth Wilson in his second film I Am the Pretty Thing That Lives in the House, which due to a Netflix agreement actually got streaming distribution months before Blackcoat’s theatrical release with A24.

The brothers worked together again on I Am the Pretty Thing, Elvis even nabbing an award from the Toronto International Film Festival in 2016, which he credits to his brother’s “sonic vision.” Oz says that with that second picture, which is the much less violent, he deliberately “tried to lighten Elvis’ load” with a quieter, almost literary ghost story — no blood or weapons or devils. Both films, though, are extremely personal.

“I know for a fact that I’m working out memory and loss and my own psyche and my own hang-ups and pains,” Oz says, “and I know The Blackcoat’s Daughter is about me.” This girl who’s suddenly abandoned by both parents, leaving her facing darkness alone, resonates with him.

“And I know I am the pretty thing in the house. That’s me.”

The director cites David Lynch as an inspiration, specifically for the fact that everything Lynch creates is so positively him. And in Blackcoat’s, the story is easy to read as an Oz Perkins allegory, with parallels to both Psycho and Oz’s own stories of loss.

“On the surface, I’m making movies and writing scripts and casting people, and they do festivals and blah blah blah,” Oz says. “But down from that, the far larger part of the iceberg that’s submerged is ‘Why do I do what I do? Why do I make horror movies? Why does she have a knife as opposed to a razor or an ax?’” The “she” is Shipka’s character, Kat, who slowly morphs into a murderer under the devil’s guidance. There’s one scene, in particular — when Kat steps out from a doorway and begins slashing nonchalantly at a victim — that is seemingly ripped right from Psycho, but is still a punch in the gut of fear, no matter that we’ve seen such moments before. Oz, like many artists, is only semi-conscious of why he’s making these creative choices during the process.

“Under the surface, I’m working it out. I’m resolving. I’m resolving my relationship with my old man. It’s working out the places that are knotted, coming into yourself,” Oz says. “I am aware that that’s what I’m doing, and when Kat reaches for a weapon, she has to reach for my father’s weapon. It wouldn’t make sense any other way.”

Now Oz is working on his next picture — a black-and-white 1950s Satanic-panic female coming-of-age story — which is both very him but with some of those personal “knots” already worked out. Elvis is willing to score it, and Oz promises his brother it’ll be peppier music, something with doo-wop, so Elvis can save his psyche and sleep well at night.