"This is an unusual meeting for our zoning committee, because usually when there is a new enterprise or development in our neighborhood, they come to the West Wash Park Neighborhood Association and say, 'We would like to meet with the neighbors and tell the neighbors what we're doing,'" WWPNA boardmember Gertie Grant, who heads the zoning committee, said in starting off the meeting. "Things will go more smoothly if there is an introductory meeting with the neighbors, and this did not happen here."

Instead, Grant said, she'd heard from many residents who live close to the church, concerned about what's going on there, from the initial secrecy to what could become parking problems. This gathering was set up to discuss the concerns of these neighbors, who sat in the first few rows and wore bright pink stickers to identify themselves.

Steve Berke, co-founder of the church, was given fifteen minutes at the start of the meeting, and he spent the majority of his time talking about himself and providing background. His family owns a real estate company and bought the church two years ago for just over a million dollars, originally planning to convert the building into apartments or condominiums. 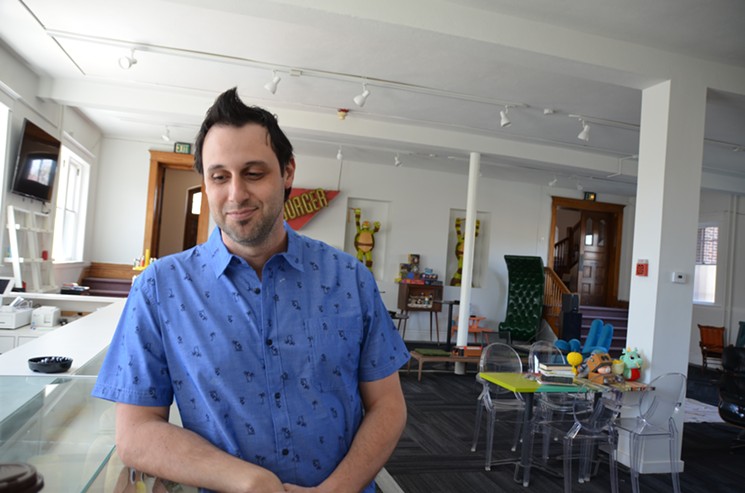 Co-founder Steve Berke inside the church.
Lindsey Bartlett
"At the time I did not know the amount of animosity within the West Wash Park Neighborhood Association toward developers that come in and buy churches and develop them into condos," Berke said. "I reached out to several attorneys in the Denver area, and they let me know this is a very difficult proposition because the West Wash Park Neighborhood is very against developers from out of town coming in and turning religious properties into for-profit enterprises."

After that, he said, some colleagues suggested they keep it a church.

"That was an interesting concept because I don't really consider myself, growing up to this point, being a super-religious person. In fact, most of the co-founding members of this church are not extremely religious people. That's because organized religion has disappointed us," he explained. "So we wanted to do something that was unique and different and allowed inclusion of all religious faiths to come to our church and be spiritual with a plant that we believe has coexisted with us for over thousands of years on this planet.... So we call our religion Elevationism, and Elevationists believe that individual spiritual search for meaning can be heightened and deepened with ritual cannabis."

Berke now lives six blocks from the church; as a neighbor, he said, he understands other neighbors' concerns. From what he's heard, he added, they focus less on the actual act of smoking marijuana for spiritual purposes in the church and more on how an influx of people into the area will affect neighbors' daily lives, with parking complaints, traffic, smell and noise.

"We've thought of all these things, and we will address those issues as they come," Berke continued. "We have some strategies in place to mitigate all of those issues, and we will do everything we can to be responsible neighbors. We do not want this to be an eyesore in the West Wash Park Neighborhood. We want this to be a shining light on top of a hill.... People changing the stereotype of what it's like to use cannabis."

A mural by artist Okuda San Miguel inside the church.
Lindsey Bartlett
According to Berke, the top issue that neighbors ask about is parking, but he doesn't see that as a problem. "I don't know if you've been to L.A. or New York or San Francisco or Miami — we do not have a parking issue in Wash Park," he said. And even if the the church becomes an international destination for cannabis consumers, Berke said, it should not increase demand for parking. If it does, the church will pursue solutions, such as valets.

"We have a church policy that does not allow anyone to actually drive there," he explained. "If you're going to come to one of our consumption-friendly private events, you can't have a car. If we see that, you're banned from the church. If you leave and we see you get in your car to drive home, your membership can be taken away from you. We don't want to encourage anyone driving under the influence."

But neighbors said they were experiencing a far different reality from what Berke described. Not only has there been increased street traffic, they said, but Berke's own staff has parked illegally on the street — and the neighbors brought photo documentation to prove it.

Neighbors also said they'd heard that the church would bring in food trucks, which would also park along the street. Berke tried to mitigate their concerns, saying the church isn't nearly large enough to warrant this.

"But you've only been open a month," a neighbor interrupted.

And that seems to be the neighbors' primary worry: the unknown. The church opened without them knowing it was coming, and they fear there will be another surprise down the road.

At the same time, Berke feels that the neighbors are being unfair and that his place should be treated just like any other church.

"I will do my best not to change the character of the neighborhood. That's all I can offer you guys here."