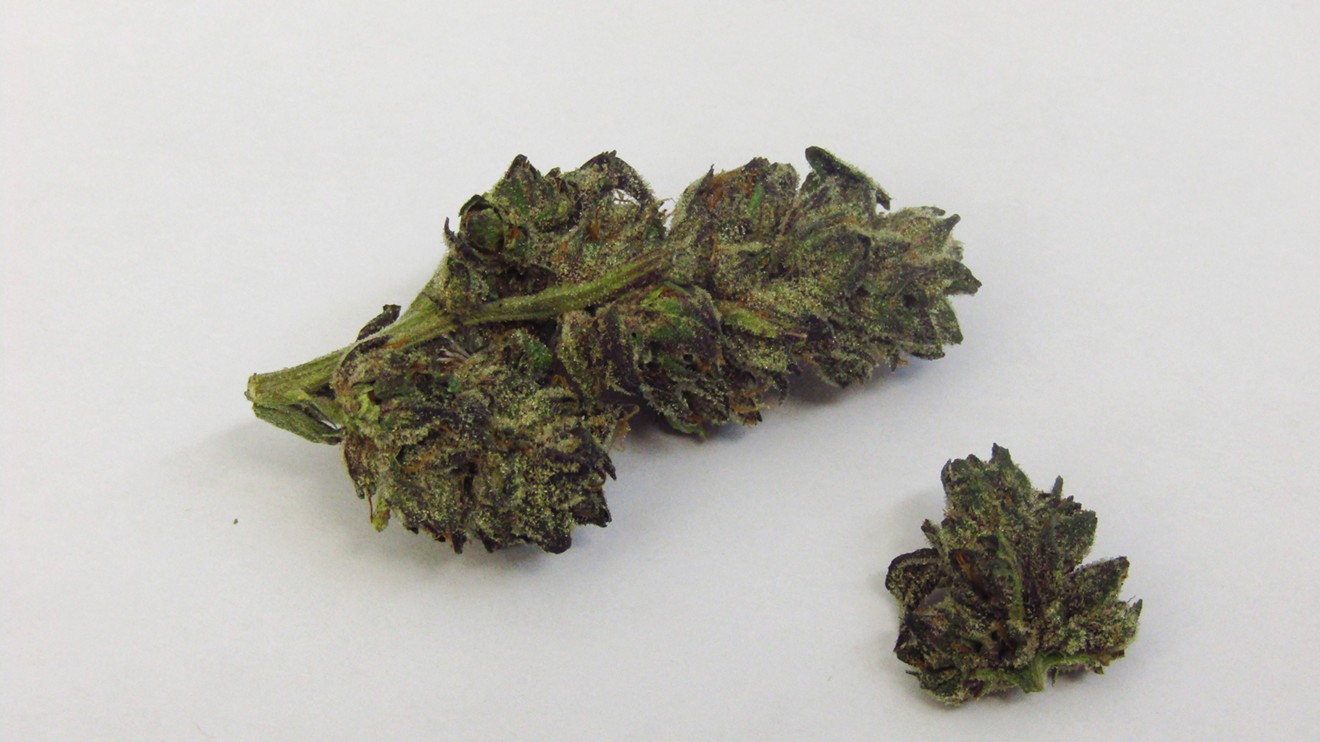 Gray skies are gonna clear up; put on a big Pie Face. Herbert Fuego
Nothing screams awkward adolescent like a whitehead. I’m in my late twenties and still wake up with a pulsating demon of puberty on my forehead from time to time. I also have the sense of humor and social aptitude of a thirteen-year-old, so maybe the occasional zit is just a reminder of who I really am inside. Either way, color my grill grateful for avoiding a true acne curse in high school. If I hadn’t, Pie Face probably wouldn’t seem as appealing as it does today.

A cross of Cherry Pie and Face Off OG from Oregon breeder Archive Seed Bank, Pie Face (also called Pie Face OG) is known as a functional hybrid with a sweet, dirty flavor reminiscent of fruity tea notes and potent bubble hash. Despite the hash-heavy flavor, Pie Face’s potency isn’t always on the top tier at the dispensary, and the high allows for reasonable focus and energy. Those active effects, combined with Pie Face’s stress-relieving qualities, have pushed the strain’s popularity outside of the Pacific Northwest.

It’s hard to tell what Pie Face’s ceiling is commercially in Colorado. The strain’s affable effects and multi-layered flavor are more than desirable for consumers, but for growers in a market thirsty for quantity, Pie Face’s ten-week flowering period and average yields aren’t sexy. But home growers, less concerned with those attributes, have taken a liking to Archive’s creation, and seeds of the strain are still moving around out there.

Looks: Segmented and typically dense, Pie Face’s calyxes tend to grow out first, and then up. The oval and triangular buds can foxtail, as well, giving the forest-green and violet buds a very modern, West Coast vibe.

Smell: Pie Face’s Cherry Pie lineage isn’t very noticeable, though the strain does carry some sweet berry hints. Its fruitiness is generally overshadowed by scents of bitter pine and hash, as well as heavy floral notes.

Flavor: It’s always fun (and rare) when a strain’s flavor showcases some qualities you missed in the smell, and Pie Face does just that. Hoppy, piney flavors and zesty hints of hash cling to the sides of your tongue, with a sour-cherry and citrus aftertaste sneaking in and staying around.

Effects: Good for morning and daytime sessions, Pie Face’s relaxing qualities tend to hit the mind more than the body. Users are able to take on home tasks and activities with less stress and soreness, and middle to high tolerances can keep the munchies at bay until the mission’s complete.

Home grower’s take: “Traded some Purple Sherbet to a friend in the Bay for Pie Face OG not too long ago. It was delicious in a fruity-tea sorta way, but it still had those dank Kush tastes, too, so it was kind of new in that way. Tended to have a strong initial hit but weak puffs after. The high was nice during the day, though, and kept me content well through the afternoon. Haven’t heard much about it out here yet.”

Commercial grower’s take: “Pie Face has some pretty great medicinal effects. It tends to calm our shoppers’ stomachs without going crazy on their appetites, which is good for people who just want help eating without eliminating their discipline. It’s also good for headaches and eye pain, I hear. You probably won’t see Pie Face blow up out here, because it takes a while to bloom and isn’t the biggest producer. Some growers know it better than others, though, so you’ll still see it around.”