What Sodas Are Denver Pot Smokers Using to Cure Cottonmouth?

Green Market Report and Consumer Research Around Cannabis
Marijuana and the munchies have been linked together since, well, forever. Unfortunately, so have marijuana, the munchies and cottonmouth. Smoking pot reduces saliva flow, drying the mouth and leaving more food debris while creating a safe haven for bacteria that causes bad breath. To counteract that, many of us crack open a soft drink after a joint – but what kind?

As part of their Cannabis Freakonomics study, Green Market Report and Consumer Research Around Cannabis have been studying how legal cannabis affects consumerism, studying motivations for cannabis consumers both before and after they get high. The first munchie-related study determined which Denver-area fast-food chains were visited the most by adults who had recently been to a dispensary and found the usual heavyweights at the top. The newest study looks at soft drinks, and there aren't many surprises here, either.

Green Market Report and Consumer Research Around Cannabis
You might want to stop reading if you prefer coconut water or kombucha, because this list largely comprises traditional soft drinks – you know, the ones filled with sugar, dyes and all that other good stuff. Coca-Cola dominates, taking the top spot nationally and in all five markets studied. However, Denver's affinity for Pepsi and Mountain Dew makes it close.

According to the study, nearly 29 percent of Denver-area adults who consume cannabis choose Coca-Cola as their preferred drink, with Pepsi close behind, at 27.4 percent. Mountain Dew, Dr Pepper and Sprite round out Denver's top five. As the study notes, McDonald's, the clear winner in the first Freakonomics study on fast-food restaurants, has a deal with Coca-Cola, which could help explain the soda's dominance. 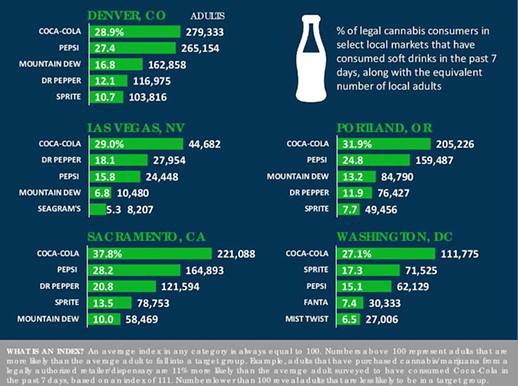 Green Market Report and Consumer Research Around Cannabis
Other high performers on a national level are Red Bull, Diet Coke, 7UP, Monster Energy and Fanta. A surprising contender in one local market is Seagram's. However, that becomes less surprising when you see that the maker of ginger ale and club soda – two popular mixers for alcoholic drinks – only places in Las Vegas.

The absence of more diet-soda brands and presence of two energy drinks could line up with trends from younger demographics, the study suggests. “The choice of Red Bull over diet drinks may be because of the company’s sport sponsorships," explains Green Market Report CEO Debra Borchardt. "Red Bull backs athletes from sports like BMX racing, snowboarding, surfing and skateboarding."