Kate McKee Simmons
A specialized spectrum of invisible light that will kill all the pathogens in your grow: That's what SpectrumGro promises the Pathogen Death Wand will be.

The Colorado-based SpectrumGro markets and distributes rods about an inch and a half thick and 48 inches long. They're installed two feet from the crop — above it, under it or to the side — and once they're turned on, they get to work eliminating pathogens in the plants and in the soil. The light attacks mold, bacteria, fungi, powdery mildew and most kinds of yeast.

"On cannabis plants, this is all growing naturally. The yield is being destroyed by powdery mildew outbreaks, and the last thing users of cannabis want is to be inhaling or smoking anything that might have a spore from powdery mildew," says CEO James Merrick. "So for the grower, you've obviously got grow lights, and then our light is a strip that will sit alongside those grow lights and help the grow kill the mold and powdery mildews."
The Pathogen Death Wand sounds like science fiction, but a similar method has already been used by grocery stores to keep produce fresh using the patented radiant light energy technology. "The wavelengths of light are a unique cocktail," Merrick says. "We are using the balance in that cocktail to create and achieve the desired outcome in medical cannabis. It's a constant, active process. The longer the light is on, the results build over time." 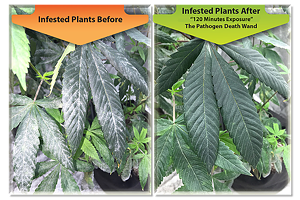 SpectrumGro
The problem with most pesticide products on the market is that they're usually a spray or gas of some kind, he explains. The current solutions almost always leave a residue on the plants, but the light is organic, simple, and requires no extra work. "It's not employee-dependent," notes Brett Johnson, president of SpectrumGro.

Ideally, Johnson says, growers would use the light initially on the soil and then very early on in the seedling stage. That way, pathogens are eliminated at the very beginning of the growing process, and the light ensures that plants remain pesticide-free.

To test the light on mildew, the team didn't even start with cannabis. The SpectrumGro team began by trying to eliminate powdery mildew from grapes.

"The technology doesn't understand legality, only biology," Johnson says. When the light touched the grapevine, it killed all the mildew almost immediately.

The team didn't just test the effects of the light on the plants, but also previously failed samples that were already highly infected with pathogens. These were then incubated to create an even more highly infected powdery mildew before testing it to see how much of it they could eliminate. After 4 days it had eliminated 57 percent.

"We wanted to see if we could take a failed crop and fix it," Johnson says. "And when a failed crop is treated under the light, it comes out clean after we've treated it."

Growers in Colorado are already trying out the light; the company will be one of many presenting their products at the Seed to Sale Show that starts on January 31.

"For us, it's a plant. It's a flowering plant, and has issues just like every other flowering plant," Merrick says. "We've found a way to kill pathogens in medical cannabis."