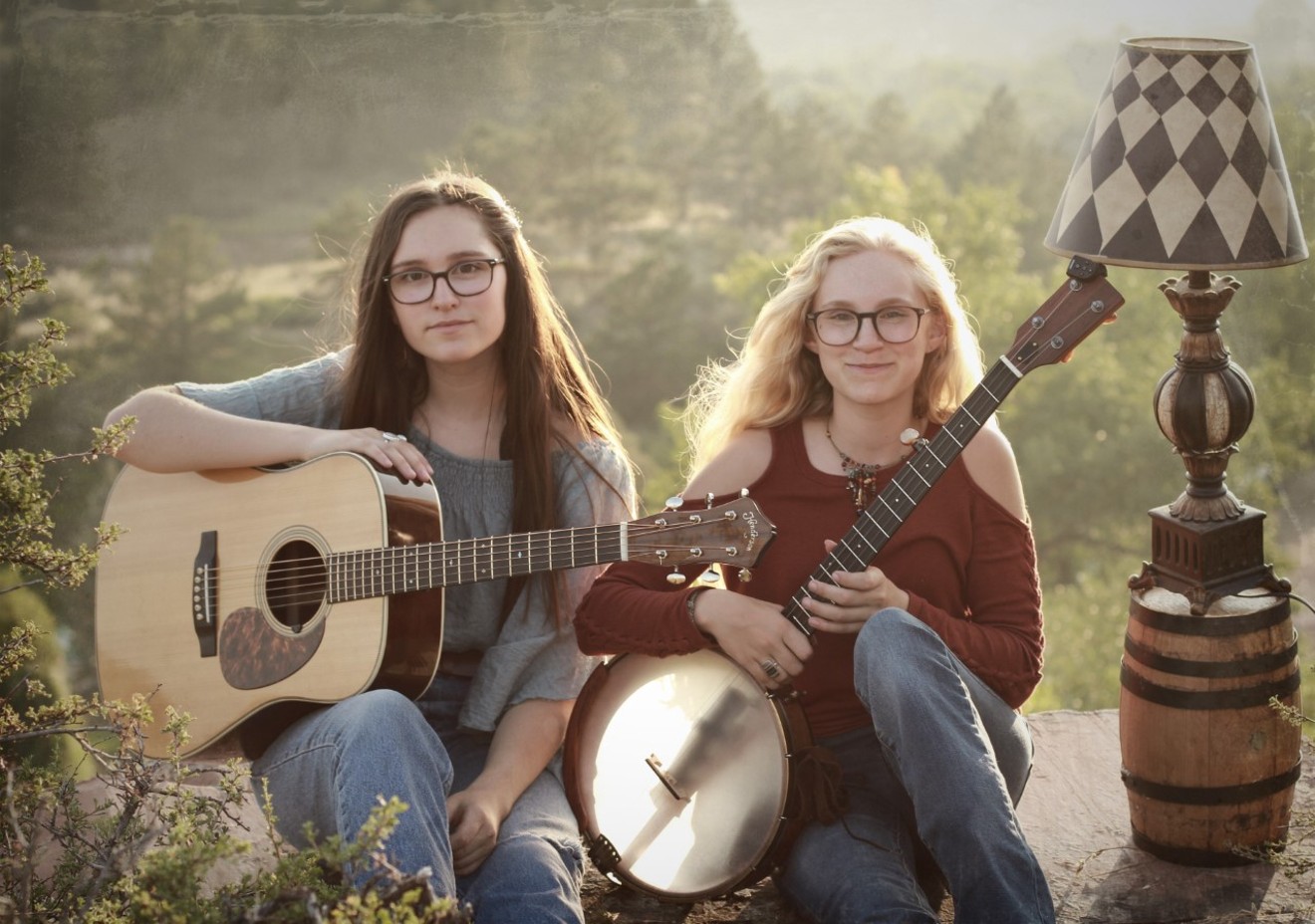 The Cody Sisters are Denver's latest rising bluegrass act. The Cody Sisters
It's no secret that the Centennial State is fertile ground for bluegrass. The high and lonesome tones that emanated from the British Isles and that were later echoed in the United States via artists like Bill Monroe and Flatt and Scruggs have long been at home in the Rockies. Each new year reveals emerging local talent and further seasons our existing roots-oriented artists. The abundance of pickers and grinners on the Front Range cannot be contained by ten bands, but here's a sampling of some of the acoustic-based outfits who help make up the always evolving and thriving Colorado bluegrass music scene. Bluegrass is an expansive genre, so we have included a few newgrass bands and purveyors of bluegrass blends along with the more traditional sounds.


Hot Rize
Hot Rize is one of the first Colorado bands to bring wide acclaim and notice to the state's rising bluegrass scene. With classics including "Colleen Malone," "Blue Night" and "Hard Pressed," as well as brilliant takes on traditional gospel-based numbers such as "Keep Your Lamp Trimmed and Burning" and "Climb the Ladder," Hot Rize was and is one of the Front Range's finest bluegrass products and has been inspiring younger generations of pickers since the act kicked off in the late ’70s. Tim O'Brien, Nick Forster, Pete "Dr. Banjo" Wernick, Bryan Sutton, the late Charles Sawtelle and the late Mike Scap (original Hot Rize guitarist and founder) have all left their indelible marks as part of the band.


Leftover Salmon
Festival cryer and all-around embodiment of polyethnic Cajun slamgrass, Salmon frontman Vince Herman moved to Colorado from his home state of West Virginia after being inspired by bands including Hot Rize, which he first took in at the Telluride Bluegrass Festival in the mid-’80s. Herman followed his bliss and realized his musical dreams in the Colorado Rockies. When members of zydeco-rooted act the Salmon Heads mashed up with members of the Left Hand String Band, including guitarist and mandolin player extraordinaire Drew Emmitt, for a 1989-1990 New Year's Eve show in Crested Butte, Leftover Salmon and jamgrass were born. Many younger bands continue to take their cues from this act in an attempt to capture the fast-picking, ski-town-bar magic of the inimitable group.


Trout Steak Revival
One of Denver's rising bluegrass-rooted groups, Trout Steak Revival also offers folk, country and maybe a dash of rootsy pop. The band, which was founded by a few Michigan transplants, is a blend of the old and the new, with an emphasis on uplifting performances and original songwriting. The act's sound includes the strain of a fiddle and the twang of a banjo along with a newgrass sensibility and a focus on solid vocal hooks and familiar refrains. Trout Steak Revival started around 2009 and took top honors in the band competition at Telluride in 2014; it has since blazed an arc over the foothills and beyond.


Masontown
A group that has been noted on Westword's previous bluegrass lists, Masontown continues to impress. The Front Range-based outfit, with members in Denver, Lafayette, Longmont and Lyons, is marked by outstanding musicianship, including the fiddling of Natalie Padilla, the guitar picking of Eric Wiggs, mandolinist Mike "Doctor Mando" Canney, upright bassist Bradley Morse and banjo player Sam Armstrong-Zickefoose. Their sound is a mix of the contemporary and the traditional with a driving rhythmic current and an airtight sense of arrangement.
Whitewater Ramble
Self described as high-octane Rocky Mountain dancegrass, Whitewater Ramble is known to fuse acoustic instrumentation with drums, piano and even the occasional electric guitar exploration. This is progressive bluegrass played by some of the area's best musicians that holds to the rootsy core of the genre while expanding traditional bluegrass boundaries to arrive at a contemporary place. Whitewater leans at times toward rock, but there remains enough down-home acoustification to keep the act rooted in bluegrass while swinging for the jam stands.


Turkeyfoot
Turkeyfoot bluegrass is marked by solid songwriting and a sound that is, refreshingly, in the traditional vein of the genre. The group is a working example of the Denver bluegrass scene in operation. Mandolin player Jordan Brandenburg credits his time at various bluegrass picks around town as being the spark that helped ignite the band. The group recently placed in the band competition at RockyGrass and is itching to take its message to a wider audience.


Ragged Union
Ragged Union melds an authentically traditional sound with the dazzling virtuosity of some of the best pickers in the genre. The talented outfit includes bandleader Geoff Union, songwriter and bassist Benny "Burle" Galloway, fiddler Justin Hoffenberg, 2016 Winfield national mandolin champion Jordan Ramsey and banjoist Chris Elliott. The band has the ability to seamlessly shift styles from old-time waltz to prog-grass. "It can’t be Bill Monroe and the Stanley Brothers forever," explains Union. "All the new strains of bluegrass, such as the bands that come out of Colorado, help to breathe new life into the genre.”


The Railsplitters
Counting Boulder as their home base, the Railsplitters fall into the more progressive bluegrass camp. Unapologetically blending Appalachian influences with genres as far afield as samba and hip-hop, the group includes Lauren Stovall and her Emmylou Harris-esque vocals, Dusty Rider's intricate banjo work, Peter Sharpe's Brazilian and bluesy flare on the mandolin, Joe D'Esposito's New England and Italian-inspired fiddling, and Jean-Luc Davis on the double bass. The Railsplitters have won multiple awards, including first place in the RockyGrass Band Competition in 2013.


Wood Belly
Winners of the 2018 Telluride Bluegrass Festival, Wood Belly was born when mandolin player Chris Weist met guitarist Craig Patterson and dobro player Chris Zink at RockyGrass in 2015. Within a year, they combined with banjoist Aaron McCloskey and bassist Taylor Shuck. With the group's recent Telluride win and debut release, which dropped this past May, the outfit staked its claim among artists capable of transporting traditional instrumentation to new ground.


The Cody Sisters
With uncanny talent and an impressive knack for capturing a variety of old-time and bluegrass styles, the Cody Sisters — fourteen-year-old Maddie and sixteen-year-old Megan — demonstrate skills way beyond their years. The girls, who are both students at the Denver School of the Arts, with the aid of their father Steve Cody on upright bass, are rapidly winning appreciative listeners in Colorado and around the world. They cite inspiration from artists including Sarah Jarosz, Gillian Welch and David Rawlings.
KEEP WESTWORD FREE... Since we started Westword, it has been defined as the free, independent voice of Denver, and we'd like to keep it that way. With local media under siege, it's more important than ever for us to rally support behind funding our local journalism. You can help by participating in our "I Support" program, allowing us to keep offering readers access to our incisive coverage of local news, food and culture with no paywalls.
Make a one-time donation today for as little as $1.