Did you miss the Ultra Music Festival in March? Fear not. April is looking to be a great month for electronic music in Denver. George Martinez
March was a great month for electronic-music events. Denverites had the chance to check out trance-master Paul Oakenfold as he rocked generations of ravers at Beta Nightclub, the Black Box hosted a stellar lineup of women artists for International Women's Day, and Excision brought two crazy nights of visuals and lasers to the 1STBANK Center.

If you missed these excellent shows, fear not, because April is rife with potential to see some awesome DJs. Many of these events are centered around Denver's favorite cultural holiday, 420. So earmark your calendars, find your favorite pair of trainers and dance all night long.

We promise Big Wild has a face.
Miles Chrisinger
1. Big Wild
Saturday and Sunday, April 1 and 2
Gothic Theatre
Big Wild has a creative, unconventional approach to electronic music, using analog instruments to create soundscapes drawing from hip-hop and electronic influences. Unfortunately, the party has sold out, so if you're looking to catch Big Wild's first show since Decadence, you will have to find, ahem, alternative methods of getting through those doors. 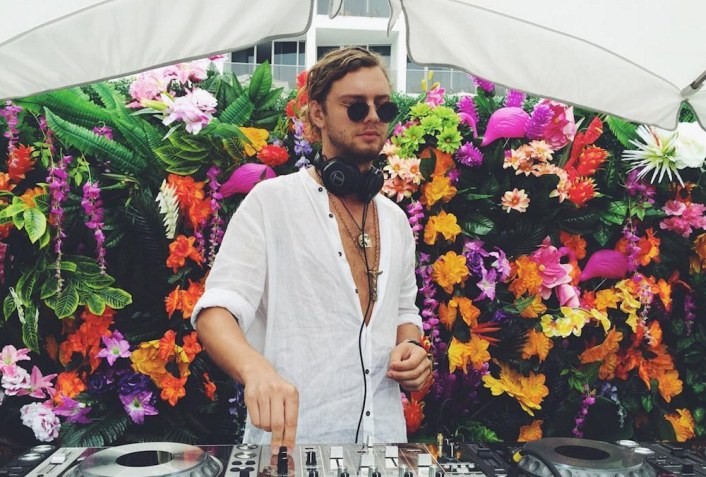 Thomas Jack, the epitome of chill.
This Song is Sick
2. Thomas Jack
Friday, April 7
Church Nightclub
The often linen-clad Aussie DJ Thomas Jack will stop by the Church for a chill set. After breakout success, Thomas Jack has been a leader in the tropical-house subgenre. So relax and start summer early with one of Australia's hottest DJs.
3. Clean Bandit
Monday, April 10
Gothic Theatre
If you want innocent popular hits to dance to but want to shy away from button-mashing DJs, then make your way to Clean Bandit's show. The British electronic group has collaborated with many artists, including Sean Paul and Jess Glynne, as featured above in their classically inspired dance-pop hit "Rather Be." The Grammy award winner is sure to provide a fun show that infuses strings into many of its catchy songs.
4. UZ
Wednesday, April 19
Bluebird Theater
UZ will be performing 420 eve at the quaint Bluebird Theater. A trap DJ and producer behind a sinister gold mask, the mysterious UZ is a cult favorite for his raw sound. His collaboration with Chinese rapper Blow Fever is his latest release. The crowd will surely be wild at this show.
5. Caspa
Wednesday and Thursday, April 19 and 20
The Black Box
One of the pioneers of the original dubstep scene in England, sub.mission is putting on Caspa's two-night run at the intimate Black Box. Caspa, who at one point called Denver home, is a melodic, bass-heavy DJ who has just released a new single and video, seen above. However, if you want to see the self-proclaimed "dopest ghost," both nights have quickly sold out.

Read on for more of the best electronic music events in Denver. 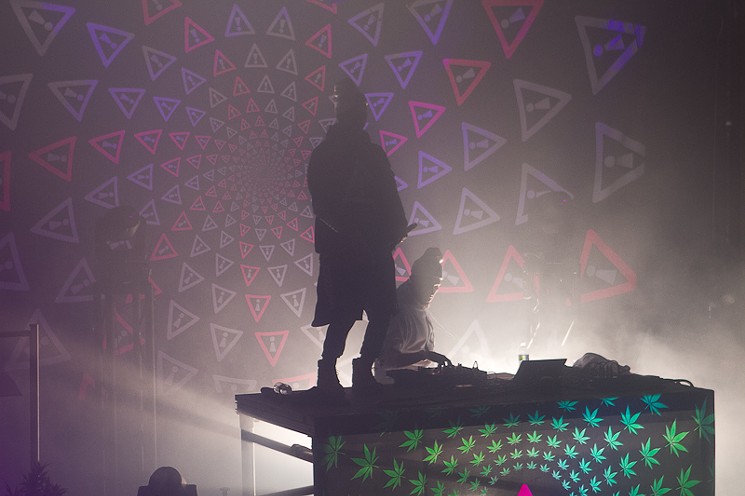 Flosstradamus is very 4/20-friendly.
Westword Magazine
6. Flosstradamus
Thursday, April 20
Red Rocks Amphitheatre
Marking the beautiful arrival of this Red Rocks season, Flosstradamus headlines the 4/20 show at the world famous amphitheater. For a bass-filled 4/20, look no further. Flosstradamus, with support from What So Not, Branchez and Griffin, will bring rave vibes to a unique celebration of trap, dubstep and exceeding levels of bass.
7. 420 on the Block, featuring Rusko
Thursday, April 20
1000-1200 Blocks of Broadway (Vinyl, the Church, Bar Standard, Milk Bar, City Hall and the Living Room)
In the void left by the Cannabis Cup moving to Southern California for 4/20 (wow, someone moving away from Colorado?), cannabis-industry leaders have created a multi-venue party for Denver's favorite holiday. Starting at 4:20 p.m., the festival features industry speakers, standup comedy, and live music from Del the Funky Homosapien, Cut Chemist, Dumpstafunk, and headliner Rusko.

8. Madeon
Friday, April 21
Church Nightclub
DJ and producer Madeon may only be 22, but he has been deep into the house and nu-disco scenes since 2011. He's worked with Coldplay, Lady Gaga, Ellie Goulding, Muse and Passion Pit, solidifying his name with a few of pop music's brightest. If you haven't smoked yourself silly the night before, be sure to make your way to the Church to see this great French DJ
9. Hot Since 82
Sunday, April 23
Beta Nightclub
For a deep tech-house show, Beta is bringing a favorite of the British and European club circuits: Hot Since 82. Purists of house music flock to his shows and to the Internet to hear recordings of them, like his three-hour set at Space Ibiza that was broadcast over BBC Radio1 by Pete Tong as an essential mix, or his Boiler Room show, seen above. There's no better DJ to dance away the "Sunday scaries" to, especially with his beats piping through Beta's killer sound system.