Musicians, Magicians and Artists Send Valentines to the Mercury Cafe

That pretty much sums up, well, everything these days. And in that context, the DeVotchKa multi-instrumentalist and frequent Colorado Symphony collaborator has teamed up with magician and mentalist Professor Phelyx to recruit some of Denver's best artists for A Valentine for the Mercury Cafe, a free-to-watch fundraising livestream at 1 p.m. Sunday, February 14.

Phelyx will emcee, and Hagerman will play music with the Grand Orquesta Navarre; Nathaniel Rateliff, Wesley Schultz of the Lumineers, Nick Urata, comedians Adam Cayton-Holland and Josh Blue, Lannie Garrett and poet Andrea Gibson are also on the bill.

Why does such a legendary business need a fundraiser? Because things are so weird that even the Merc, a staple of Denver's cultural scene, finds its future endangered by restrictions, shutdowns, limited capacities, canceled events and hesitant former patrons.

In December, after learning that iconic jazz club El Chapultepec was gone for good, Hagerman and Phelyx realized how much of what they love about this city could be disappearing. For both artists, as well as so many of their colleagues, the Mercury has been a vital home base for creative experimentation, a venue where anything creative is possible.

Denver wouldn't be Denver without the Merc. And for Hagerman, the connection couldn't be more personal. "I met my wife at the Mercury Cafe, and we had a bunch of kids," he says. "It’s kind of a love story going way back to 2003." DeVotchKa violist Tom Hagerman.
Gary Isaacs
Coming off of a painful breakup, Hagerman recalls, he had headed down to the Merc to see some friends in a band. While there, he sidled up to the bar and started chatting up the bartender. As the night went on, he kept drinking away the cash in his wallet.

"She started giving me free drinks because I ran out of money," he recalls. "She realized I drank way too much and started watering my wine down. I was drinking water and was obliterated by the end of the night."

A friend suggested that the bartender take him home.

For Phelyx, a lifelong magician and mentalist who was born and raised by a homicide detective in Denver, the Mercury Cafe was a safe haven. 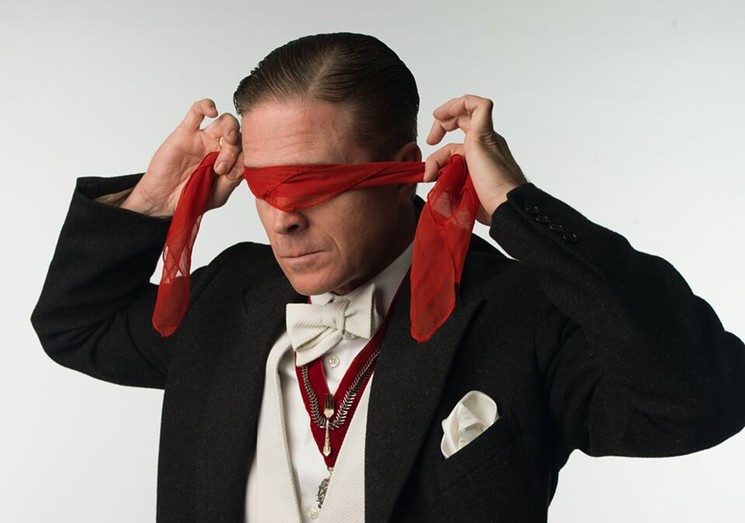 Mentalist Professor Phelyx dons a blindfold.
Roman Chavez
"I was a deliberate misfit," he says. "It was places like the Mercury Cafe that I was able to not get beat up. ... It was a safe place for the deliberate misfits. It was a meeting place. It was where artists of all kinds of disciplines could find each other."

"I feel like Marilyn [Megenity, owner], she’s really the patron saint of all of us artists and musicians and sort of marginalized folk, a lot of left-leaning progressive folk," Hagerman adds. "She really embraces anybody to come in and have a gathering space and a place to share ideas and to produce their artwork. The place is just so legendary."

Professor Phelyx and Tom Hagerman have booked A Valentine for the Mercury.
A Valentine for the Mercury
So to support it through the pandemic and beyond, Phelyx and Hagerman surprised Megenity by recruiting some of Denver's most popular artists to send in video valentines for the Merc. Phelyx will live-emcee the event, and viewers will be able to donate through the Mercury Cafe website over Venmo. There will also be a silent auction available on the Merc website and 30360 Media's website that goes up a few days before Valentine's Day; that runs through midnight on February 14.

"This is going to be cool," says Hagerman, "because it’s a big love letter to the city of Denver and the Mercury Cafe."

For more information about A Valentine for the Mercury Cafe, which starts at 1 p.m. on February 14, go to the event's Facebook page; attending virtually is free, though donations are encouraged. You can also support the Mercury Cafe through its GoFundMe campaign. The Merc, located at 2199 California Street, is open under Level Yellow restrictions; find out more here.
KEEP WESTWORD FREE... Since we started Westword, it has been defined as the free, independent voice of Denver, and we'd like to keep it that way. With local media under siege, it's more important than ever for us to rally support behind funding our local journalism. You can help by participating in our "I Support" program, allowing us to keep offering readers access to our incisive coverage of local news, food and culture with no paywalls.
Make a one-time donation today for as little as $1.