Inside Colorado's 24 Mass Shootings During the Last Six Years 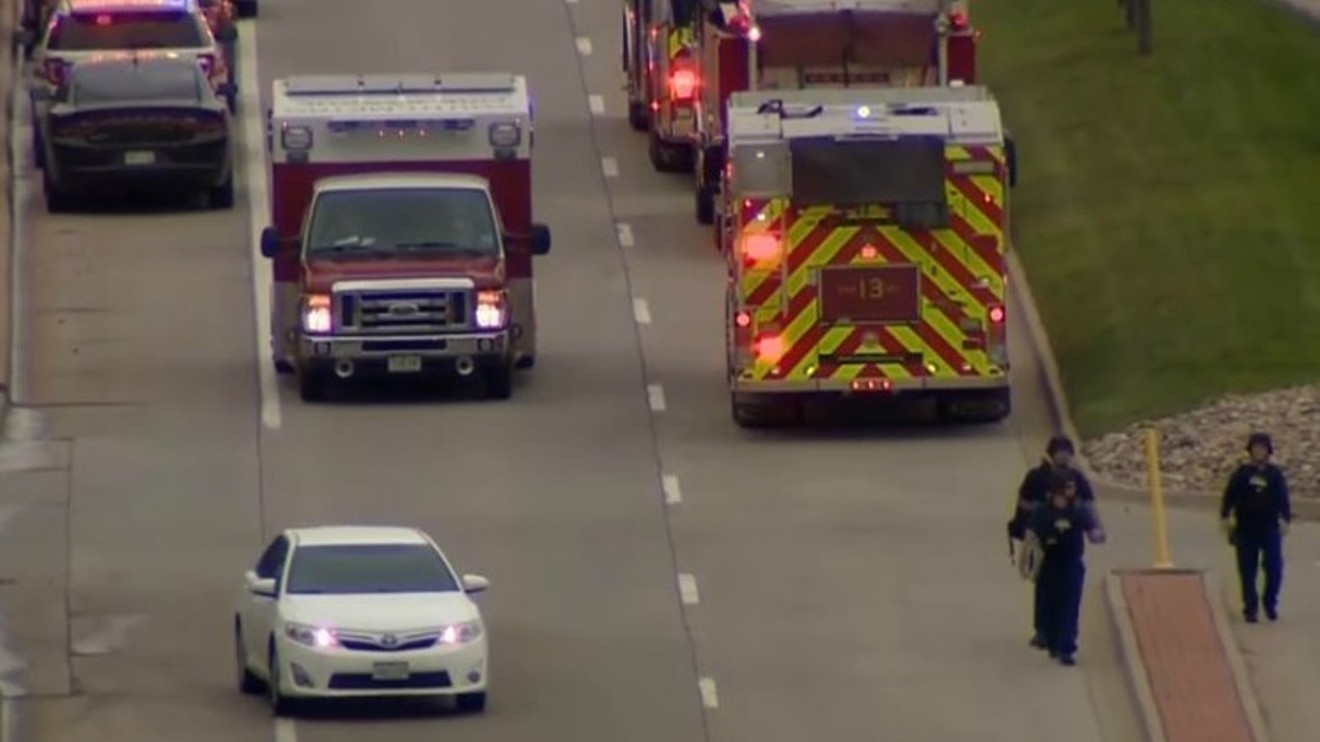 Emergency responders outside the STEM School Highlands Ranch in May. 9News via YouTube
The weekend shootings in El Paso, Texas, and Dayton, Ohio, with a combined death toll that has now reached 31, continue to dominate conversations nationally and locally. But focusing on these two incidents, as horrific as they are, tends to distract from the frequency with which shootings that injure or kill multiple people take place across the United States, including in Colorado, and the way so many of them either earn little attention or are quickly forgotten because of how commonplace they've become.

A case in point: According to the Gun Violence Archive, there have been 24 mass shootings in Colorado, nine of them in Denver, during the past six years, and the majority are likely to be unfamiliar to the average person. All of them are listed below, complete with links to additional archive information and previous Westword coverage.

GVA identifies a mass shooting as any incident in which at least four people are injured or killed, and like another major data compiler, Mass Shooting Tracker, it places no restrictions on such episodes. But other organizations define the term differently, as noted in a 2018 RAND Corporation report. For instance, Mother Jones counts only so-called "indiscriminate" incidents with three or more fatalities other than the shooter and excludes crimes of armed robbery, gang violence or domestic violence. Likewise, Stanford University's Mass Shootings in America database skips shootings related to gangs, drugs or organized crime, but requires just three fatal or nonfatal injuries aside from the shooter.

But those who get hung up on these distinctions are at risk of missing the larger point about the frequency of multi-victim shootings — one underscored by the two dozen items below, which run from June 2013 to June 2019

Most people will be familiar with at least three of the shootings: the November 2015 assault on a Planned Parenthood office in Colorado Springs, the lethal SWAT team raid in Douglas County on New Year's Eve 2017, and the shooting at the STEM School Highlands Ranch this past May. But that leaves 21 other incidents — one in which a popular rapper was killed, another that saw four people gunned down outside a high-brow bash at a trendy dance club, and a broad-daylight frenzy in the Ballpark neighborhood that took the life of an innocent bystander. And that's not to mention a triple homicide in a tiny Colorado town that got virtually no media coverage in Denver.

It doesn't take a math genius to realize that 24 mass shootings in Colorado over six years breaks down to four per annum, or one every three months.

Three juveniles were shot by a small-caliber weapon at a house party, and a fourth was grazed by a bullet. All four survived their injuries.

Five people were wounded during a shootout at the Layalina Hookah bar in the Springs. None of the injuries was life-threatening.

Four people were shot during an early-morning party at a hotel in Wheat Ridge. Most of the injuries were minor, although one person was transported to a hospital.

Kevie Durham, better known to local hip-hop fans as KL Tha General, was killed during a shooting at The Beach, a nightclub near Mile High Stadium.

Four people — three women and one man — were shot outside the heavily hyped Club Beta White Party. All survived.

Cristian Martinez was slain and three others were wounded in a shooting at a house party in the Baker neighborhood for which Darius Ratcliff was arrested. Ratcliff was taken into custody after being wounded in an officer-involved shooting.

Robert Dear was arrested after attacking a Planned Parenthood center in Colorado Springs. The following year, he was found incompetent to stand trial.

A late-night shooting near the Lowry Park Apartments resulted in two people being shot and two others suffering grazes from gunfire. All four recovered from their injuries.

Nghia Trong Tran was arrested after allegedly opening fire on a vehicle in Lower Downtown.

Devonne Burton was among the victims in a North Park Hill triple homicide sparked by a robbery gone wrong for which three men, including a former University of Colorado football player, were arrested.

Brandon Karr was convicted of killing one person and injuring two others in a shooting at an Adams County mobile home park. Dustin Karr, Brandon's cousin, was also shot to death in the incident; a second man, Rojelio Heredia, was found guilty for that crime.

Santos Nevares went to a birthday party outside Capulin, a town in Conejos County with a population of 200, and opened fire, injuring one person and killing three, including Guadalupe Cervantes, the guest of honor.

Douglas County Deputy Zackari Parrish was killed during a lengthy standoff with suspect Matthew Riehl, who was shot to death by a SWAT team member after firing an estimated 100 bullets.

Nineteen-year-old suspected car thief Manuel Zetina was being tracked by a police task force when violence erupted. When it was over, Zetina and El Paso Sheriff's Office Detective Micah Lee Flick were dead, and three law enforcers plus a bystander were hurt.

Family man and coach Dejon Williams was reportedly trying to break up a fight outside the Kasbah nightclub when he was shot to death. The three other injured parties lived.

From the GoFundMe page for Vaughn Bigelow: "On June 14, 2018, Meghan Bigelow was taking her 3 children to a routine dentist appointment when she became a part of a road rage encounter. Meghan and 2 of her sons were shot multiple times. Sadly, her oldest son (13) passed away June 14."

Four people were injured during a late-night party gone awry.

Brenda Martinez was shot to death at a Thornton bar, allegedly by a patron, Gary Wideman. Prosecutors contended that Wideman was kicked out of the bar only to return with a gun he used to kill Martinez and injure several others.

Anthoni Readus and Wayne Carter were killed after a domestic-violence incident that led to an officer-involved shooting.

Terrance Wardlow, a former Marine, was simply in the wrong place at the wrong time when guns started blazing in the Ballpark neighborhood. He died and four others were injured.

The narrative from a GoFundMe page for the late Brandon Coffin begins: "On December 15th 2018, my two brothers were out having a good night when it took a turn for the worst. My parents and little sister received a phone call that they needed to get to the hospital because there was a shooting. Both of my brothers were shot and one didn't make it. My little brother was shot in his leg; it missed his groin and came out the back of his opposite leg."

The quintuple shooting early March 10 on the 1500 block of Market Street, which killed a man later identified as 25-year-old Vayron Garcia and wounded four others, was the third major firearms incident along the stretch in six months, and the second to end with a loss of life.

STEM School Highlands Ranch student Kendrick Castillo was killed in a confrontation with one of two students who managed to sneak guns into the facility.

Three juveniles and an adult were shot after midnight outside an Aurora residence. The next day, the Aurora Police Department announced that a suspect had been arrested, but that individual still has not been identified at this writing.
KEEP WESTWORD FREE... Since we started Westword, it has been defined as the free, independent voice of Denver, and we'd like to keep it that way. With local media under siege, it's more important than ever for us to rally support behind funding our local journalism. You can help by participating in our "I Support" program, allowing us to keep offering readers access to our incisive coverage of local news, food and culture with no paywalls.
Make a one-time donation today for as little as $1.