Reader: Been to a Lot of Places, and Denver Is Awesome 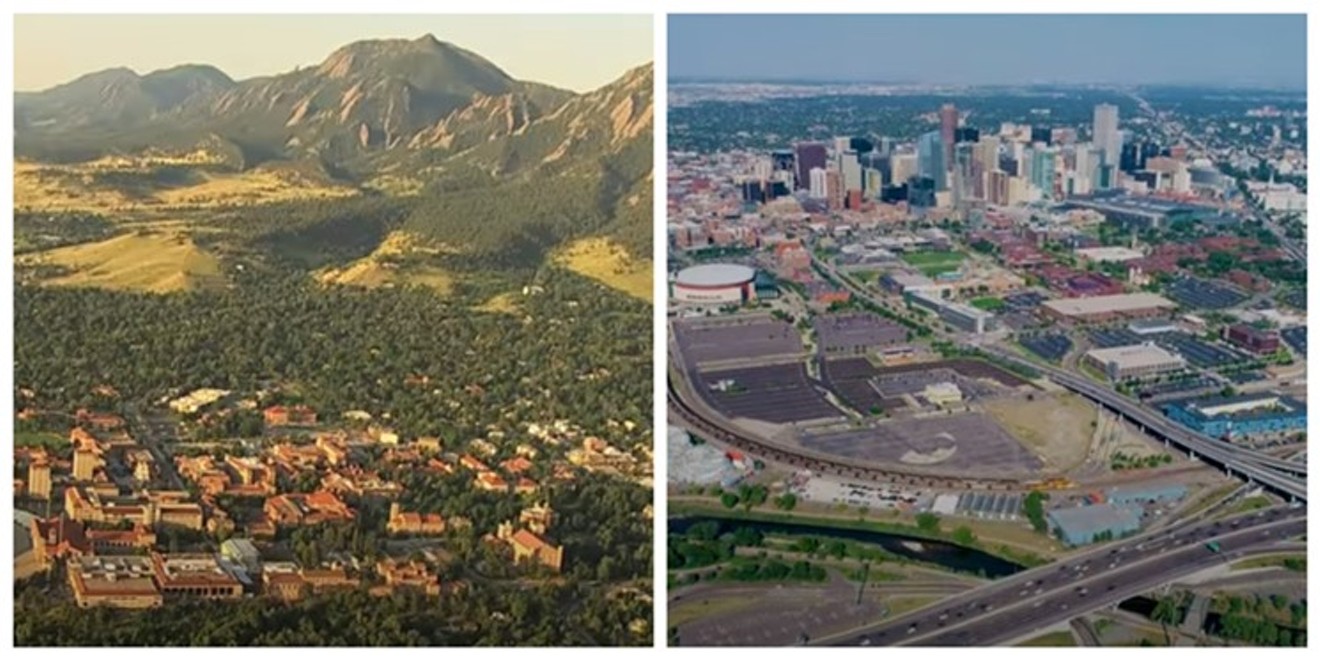 Boulder and Denver share the top spots. YouTube
We're number one! And number two! And four and five! This week, U.S. News & World Report released its list of the "150 Best Places to Live in the U.S. in 2020-21," one of those rare listicle efforts that actually gets some respect.

And this round, Colorado cities took four of the five top spots in the country. Boulder ranked first and Denver second; Colorado Springs came in fourth and Fort Collins fifth. The only city to stop a Colorado sweep was Austin, which placed third.

In their Facebook comments on our story about Colorado's near-sweep, some readers applauded...and some demanded a recount. Says Aby:

Don't spill the beans, we are still a best-kept secret. Love Colorado!

Please just stop putting these things out there. We are FULL.


We will be loved to death soon.

Cool, I hope this further raises my property value so I can cash out and move to someplace cheaper, less crowded and less crazy.

They have both become expensive, and Boulder has been for a long time. I realize that Colorado is still a beacon for people mostly from the East and Midwest, California not withstanding. I've had more than 50 years in this state and 22 in Denver. This is the fifth boom of my lifetime. The phases and changes have been the history of here all the way back to the beginning.


Don't know where they get this crap. Denver is becoming California and Boulder is already there and may surpass California.


Is U.S. News based in California?


Been to a lot of places in America, and Denver is awesome. Why do you think so many people move here?

Denver is the best city we ever lived in. Recognized what we had and retired here!

"Founded in the mid-1800s as a mining hub during the gold rush, Denver has come a long way since its Wild West days. Over time, its residents have evolved from gunslinging gamblers into an easygoing crowd of ambitious, progressive-minded fitness fanatics and nature lovers who are eager to push the envelope on everything from civil rights to drug laws. Nicknamed the Mile High City for its 5,280-foot elevation (although officially reported as 5,279 feet), Denver's location at the base of the Rocky Mountains provides a gateway to a slew of outdoor pursuits, although it is probably best known for its devout ski and snowboard enthusiasts.

"To clarify a common misconception, Denver is not a mountain town. It actually takes at least an hour to drive to the Rockies. But there are some great places for recreating within a 30-minute drive of downtown, such as Red Rocks Park and Cherry Creek State Park.

"Some might say that Denver is experiencing a gold rush of a different color: green. After Colorado residents voted to legalize recreational marijuana in 2012, Denver has seen a surge in cannabis-related commerce, from dispensaries to magazines to high-tech paraphernalia like vaporizers, rolling papers, lotions and storage containers — and the industry is gaining speed."

What do you think of the rankings? Post a comment or share your thoughts at [email protected]
KEEP WESTWORD FREE... Since we started Westword, it has been defined as the free, independent voice of Denver, and we'd like to keep it that way. With local media under siege, it's more important than ever for us to rally support behind funding our local journalism. You can help by participating in our "I Support" program, allowing us to keep offering readers access to our incisive coverage of local news, food and culture with no paywalls.
Make a one-time donation today for as little as $1.