This four-bedroom, three-bath, 3,961-square-foot home at 2363 South Decatur Street was listed June 3 for $700,000 — just under the average price for single-family, detached houses in May. Google Maps
At first glance, the biggest news in the June 2021 market trends report from the Denver Metro Association of Realtors is yet another new record average price for a single-family, detached home in the greater Denver area — just over $700,000.

But the first-ever breaching of this barrier distracts from another story: The pace of price increases is slowing, suggesting that this crazy seller's market in the Mile High metro may finally be about to plateau, and giving hope to buyers who've had a damnably difficult time landing a home they can afford.

Demand continues to overwhelm supply, as has been the case for more than a year in Denver. The number of new single-family, detached-home listings in May, the most recent month for which data is available, landed at 4,545, down 2.51 percent from the 4,662 put on the market in April and 13.01 percent fewer than the 5,225 available in May 2020.

A graphic from the report, which runs from the start of 2008 to April 2021, puts these factors in historic perspective. The yellow line corresponds to active listings at the end of each month, while the blue line shows sales that closed over the same periods: 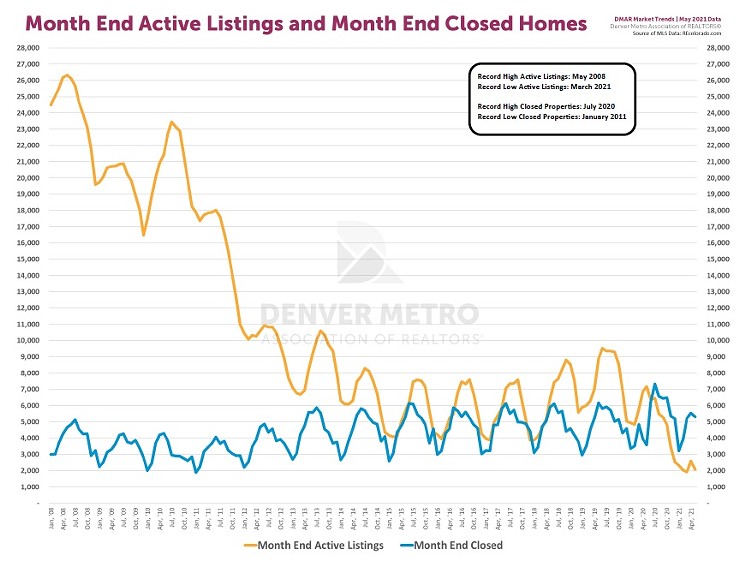 The overwhelming majority of detached homes in Denver continue to go fast. The median span between listing and sale in May was just four days — the same as in April, but half the eight days recorded in May 2020. And most are still selling for above the original asking price: In May, the average closing price was 105.92 percent of list. But that was just 0.53 percent more than the 105.36 percent figure in April, albeit a 6.54 percent leap from the 99.42 percent in May 2020.

Some of these stats hint at possible relief in the future. But Andrew Abrams, chair of DMAR's market trends committee, confirms that many house hunters are currently at wits' end.

"Buyer fatigue is the most prevalent conversation within realtor circles right now," Abrams states. "Like a marathon, buyer fatigue has slowed people down but has not stopped anyone from crossing the finish line. Interest rates continue to be relatively low and consistent. Listings continue to slowly hit the market, while buyers continue to gobble up properties as soon as they do. Just this weekend, I wrote one offer in the $400,000 price range that had forty offers, and one in the $1 million price point that had double-digit offers."

Abrams notes that many observers thought 2020 would prove to be an outlier in terms of price spikes, with 2021 shifting to normalcy. That hasn't happened yet — but there are hints at reasons for optimism.

Click to read the Denver Metro Association of Realtors June 2021 market trends report.
KEEP WESTWORD FREE... Since we started Westword, it has been defined as the free, independent voice of Denver, and we'd like to keep it that way. With local media under siege, it's more important than ever for us to rally support behind funding our local journalism. You can help by participating in our "I Support" program, allowing us to keep offering readers access to our incisive coverage of local news, food and culture with no paywalls.
Make a one-time donation today for as little as $1.