The Ten Biggest News Stories of 2017 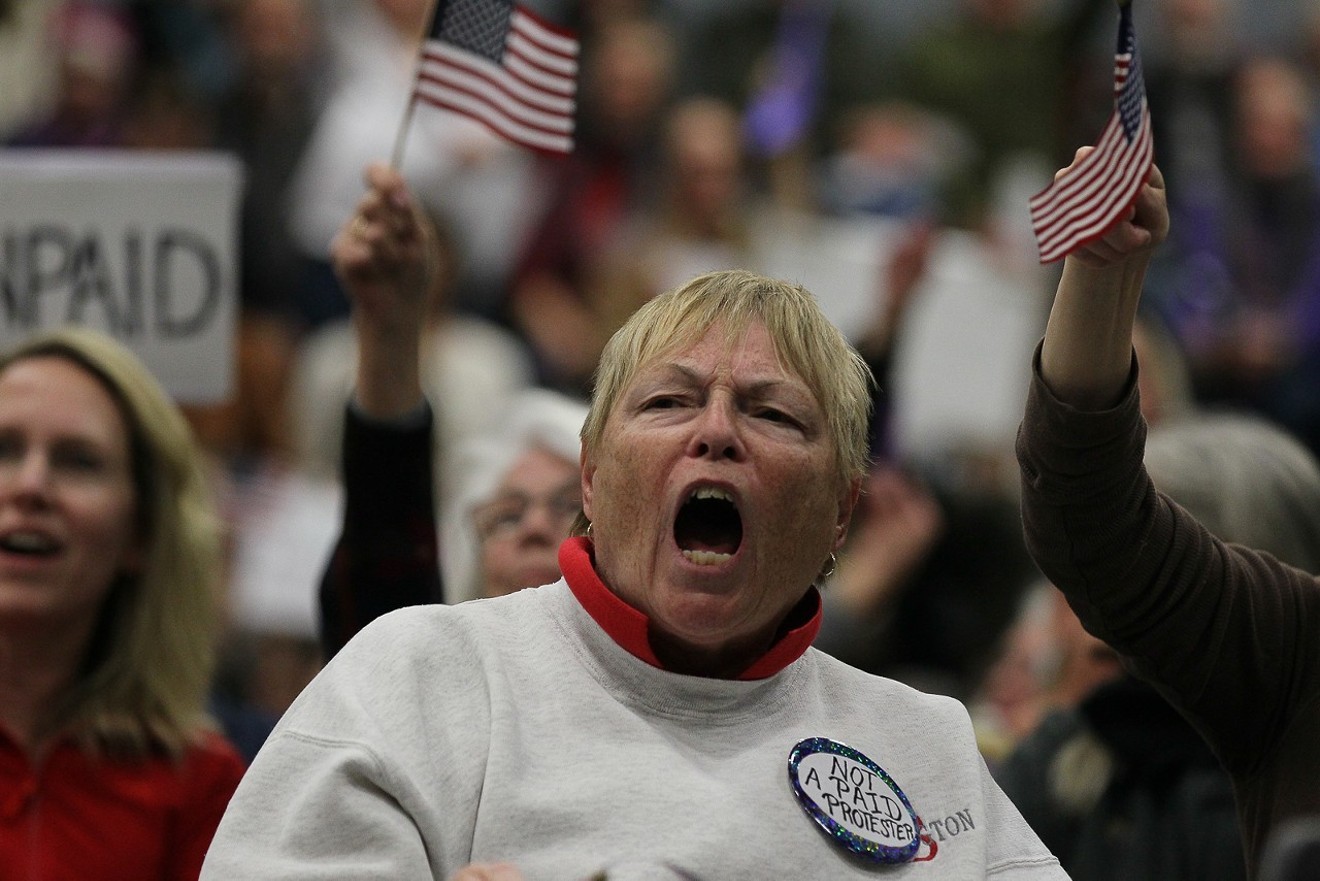 Senator Cory Gardner's constituents gave him — well, a cardboard cut-out of him — an earful during a town hall in February. Brandon Marshall
In many ways, challenges that Denver has faced for years came to a head in 2017.

Take, for example, Ink! Coffee's gentrification-sign debacle: A stupid joke about "happily gentrifying" River North landed so badly, it drew days of protests from neighbors and advocates fed up with developers and the wealthy pushing longtime residents of the city's older neighborhoods out of their communities...and also drew unwanted international headlines for Denver. Metro Denver stayed in the limelight in December, when the U.S. Supreme Court finally heard arguments in Masterpiece Cakeshop v. Colorado Civil Rights Commission, five years after a Lakewood bakery declined to bake a gay couple a wedding cake. And after enduring increasing police sweeps of their encampments and finding fewer opportunities for housing, the homeless finally gained a champion in January when Mayor Michael Hancock announced that Erik Soliván would lead the new Office of Housing and Opportunities for People Everywhere.

While Denver grappled with its own issues and scored its own successes, President Donald Trump was busy transforming the executive and judicial branches of the U.S. government, even tapping a local attorney to replace late U.S. Supreme Court Justice Antonin Scalia. Keep reading for more of the year's biggest local news stories, listed in chronological order.

Erik Soliván, head of the Denver Office of HOPE.
Jake Holschuh
1. Erik Soliván comes to Denver.
We asked the question in December, nearly a year into his tenure: Can Erik Soliván solve Denver's affordable-housing crisis? Soliván came to Denver from Philadelphia, where he led that city's housing authority, to take over the new Office of HOPE. In addition to pooling resources for the homeless, Soliván oversees Mayor Hancock's five-year affordable-housing plan; announced in September, the plan aims to create and preserve 3,000 housing units and help 30,000 residents secure housing by 2023.

Mike Johnston is running for governor of Colorado.
Mike Johnston
2. The 2018 governor's race begins...in early 2017.
We're still almost a year away from electing a new governor, but that hasn't deterred numerous candidates from jumping into the race. The early bird of a very early bunch was Mike Johnston, who launched his campaign in mid-January — nearly two years before election day on November 6, 2018. The Democrat and former state representative of northeast Denver told Westword that his priorities include stimulating Colorado's economy of the future and providing greater access to career training and post-secondary education. Twenty-nine candidates have since registered with the Colorado Secretary of State, though a few, including George Brauchler and Ed Perlmutter, later dropped out of the race.

I-70 lawsuit plaintiffs Brad Evans (at podium) and Kyle Zeppelin (in dark suit) rally with supporters at Denver's federal courthouse in July.
Alan Prendergast
3. I-70, I-70, I-70.
On January 19, the Federal Highway Administration issued its Record of Decision, a document more than a decade in the making that cleared the way for the Colorado Department of Transportation to proceed with its controversial Interstate 70 expansion project. But the project's naysayers were hardly deterred. In July, Ditch the Ditch backers, including developer Kyle Zeppelin and man-about-town Brad Evans, sued the FHA in an attempt to kill the project. A judge dismissed the plaintiffs' claims in November...but the fight isn't over yet.

Inauguration Day protesters clash with Trump supporters and march in Denver on January 20.
Brandon Marshall
4. Resist Trump is born.
The Trump presidency ignited a fire under activists in Denver. On January 21, the Women's March drew 100,000 to downtown Denver; Trump's ban on some refugees mobilized an angry crowd at Denver International Airport on January 28; the One Billion Rising march denounced the commander-in-chief on February 20; and hundreds gathered on April 15 to demand that Trump release his tax returns. But protest crowds have thinned in recent months, and Queen Phoenix, a major organizer of anti-Trump marches in Denver, reportedly left town before an October court date, when she was supposed to address five felony charges and three misdemeanor charges, all related to marijuana.

Neil Gorsuch speaking at the White House after being nominated for the U.S. Supreme Court by President Donald Trump.
ABC
5. Neil Gorsuch goes to Washington.
On January 31, President Trump nominated Neil Gorsuch to replace Antonin Scalia on the U.S. Supreme Court. The Republican from Boulder, son of former EPA head Anne Gorsuch, had studied at Oxford, Columbia and Harvard and was serving as a justice on the Denver-based Tenth Circuit Court of Appeals. Despite Gorsuch's impressive résumé, his nomination was not without controversy: Liberals and abortion-rights activists immediately denounced the conservative as a threat to Roe v. Wade. Gorsuch took the oath of office on April 10; seven months later, the Washington Post reported that Trump had considered rescinding his nomination after Gorsuch took issue with the president's attitude toward federal judges. 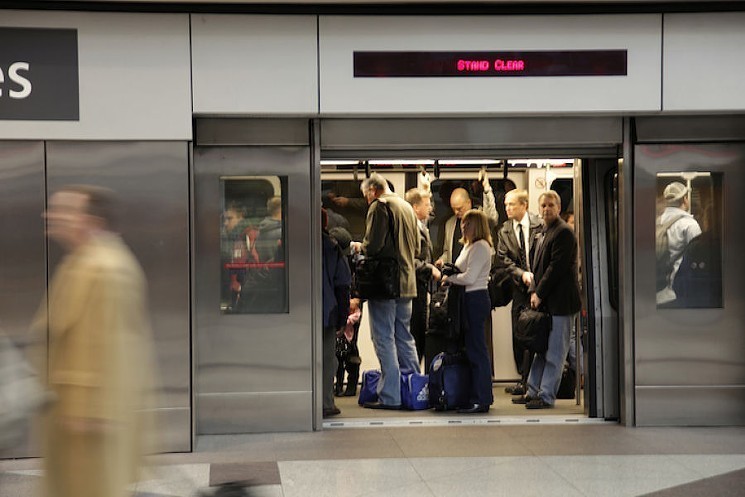 Who will welcome passengers on the terminal train?
flydenver.com
6. Denver International Airport takes off...again.
Despite the cynics who said it was too big and too far away, Denver International has been a hit since it opened (belatedly) in 1995, and today it’s the country’s sixth-busiest airport. If DIA officials have their way, it will soon be even busier. In August, Denver City Council approved a $1.8 billion renovation of the Great Hall (in a thirty-year contract with Ferrovial, a multinational company based in Spain), and in November approved a $1.5 billion gate expansion for the existing concourses; the train system is also up for $162 million in improvements. And then there’s that $14.5 million new sign, which should be glitzy enough to make us forget some of the true pieces of public art that will disappear under all this construction, including the inlaid terminal floor by Jaune Quick-to-See Smith and Ken Iwamasa, and the stunning Michael Singer-designed “Interior Garden” on the C Concourse. Still to be determined: who will be the new voices of “Train Call,” welcoming travelers to Denver. 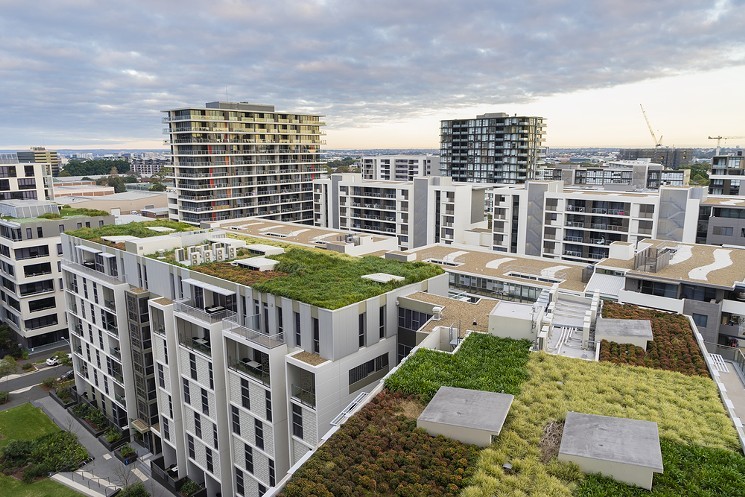 I-300 opponents argue it goes too far too fast.
Sunflowerey/Shutterstock.com
7. Denver goes green (roofs).
Approved as part of November's ballot, the Green Roof Initiative will require all new buildings in Denver larger than 25,000 square feet to install green roofs that incorporate vegetation or solar panels, in order to mitigate climate change and pollution. Just over 53 percent of voters approved Initiative 300, even though its backers were outspent twelve to one and its opponents included major developers and the mayor. The controversy around I-300 overshadowed another series of successful ballot measures that approved the massive $937 million general obligation bond, the largest in Denver history, which will allot money to improvement projects around town over ten years. 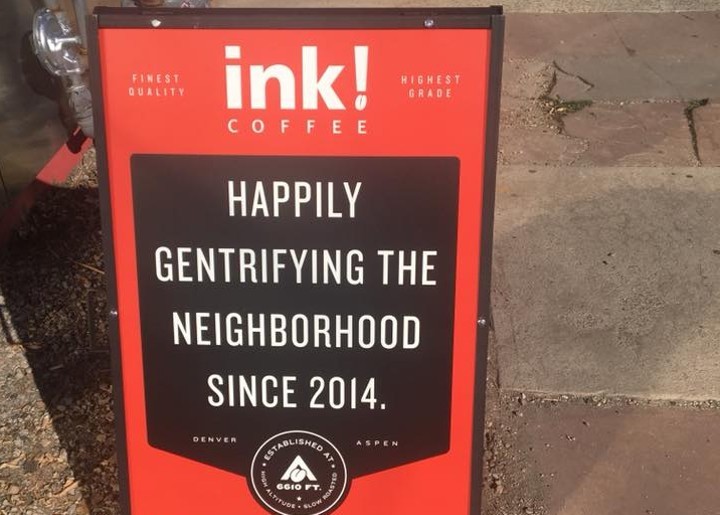 The sign seen ’round the world.
Miranda C.
8. The Ink! splatters.
Hours after Ink! Coffee posted an incredibly tone-deaf sign outside of its RiNo location on November 22, announcing that it had been "happily gentrifying the neighborhood since 2014," the sign disappeared. But its impact was just starting to unfold. After a photo of the sign blew up on social media, protesters gathered outside the store on Larimer Street, calling for a boycott. But they weren't just there to denounce Ink. The coffee shop became, at least for a few days, ground zero for residents tired of gentrification and city figureheads deemed too developer-friendly, including Mayor Hancock. Media outlets around the world picked up the story, which has a potentially happy ending: The Denver Community Action Network will host a summit on January 13 that will explore ways to combat gentrification. 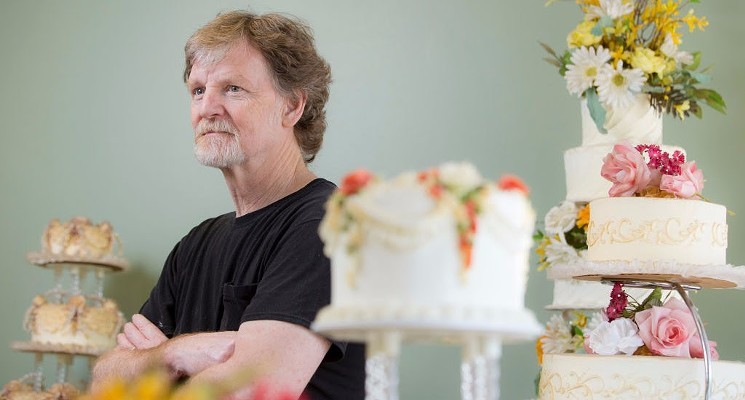 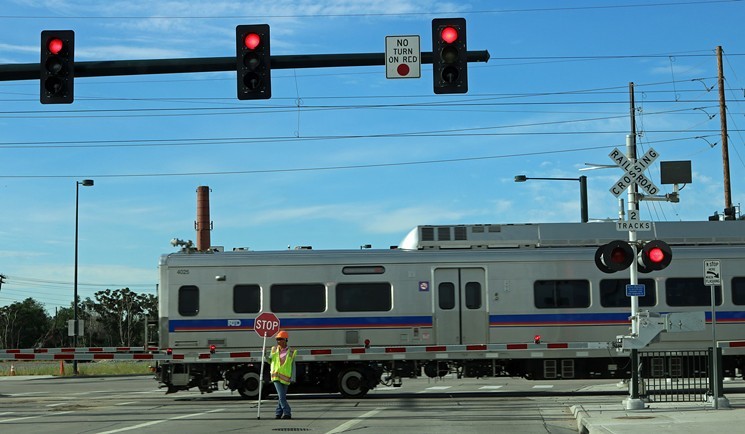 The A Line continues to be a headache for RTD and commuters.
Jeffrey Beall at Flickr
10. A Line woes continue.
Local travelers continue to second-guess taking the A Line, over a year after the commuter rail line connecting Union Station to Denver International Airport opened. The A Line's continuing mechanical issues and problems at crossings has even delayed the start of another train, the G Line, which will (maybe, one day) connect Denver and some western suburbs. A hearing early next year will decide whether the crossings on both lines are safe, and could prolong or solve commuters' issues. Here's to this subject not landing on next year's list of the biggest news stories.