Deon Jones Busted for Being Black and From Aurora, Lawyer Says

Deon Jones as seen in Denver police body-cam footage. Denver Police Department via Killmer, Lane and Newman, LLP
Deon Jones was arrested in rough, guns-drawn fashion because he was black and behind the wheel of a car from Aurora that was parked in Denver, where local cops thought it didn't belong, according to a new lawsuit.

Attorney David Lane, who represents Jones in the case, argues that this alleged example of racial profiling, captured on police body-camera video on view below, remains the Denver Police Department's policy and practice.

"Absolutely," Lane says. "This is the tip of the iceberg. We have an endless stream of wrongdoing from the Denver Police Department. They keep us in business."

Last month, we covered the strange resolution of another high-profile incident involving video and claims of racial profiling — the Colorado Springs arrest and rousting of Ryan and Benjamin Brown, who were pulled over in March 2015 for having a cracked windshield. Thanks largely to video shot by Ryan, which showed him being face-planted into snow, the City of Colorado Springs agreed to pay $212,000 to settle the matter, after which the Colorado Springs Police Department released a statement denying any wrongdoing.

Here's how Lane describes what happened to Jones on or about April 26, 2016, in a parking garage at 1509 North Pearl Street.

"Deon was parked in a legal parking spot at the apartment building on Colfax and Pearl about two in the morning," he says. "He was waiting for a friend to come down." 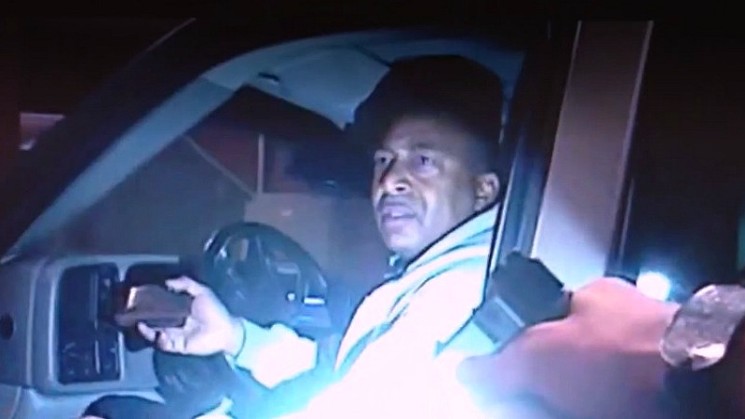 Deon Jones during the early moments of his police interaction.
Denver Police Department via Killmer, Lane and Newman, LLP
In the meantime, Lane notes, "Denver police were cruising around randomly running license plates — and Deon's plate was registered in Aurora. They saw him sitting in the car and they saw he was a black man. So they got out, knocked on his window, shining their flashlights in, and asked him to step out of the car."

In response, Jones "cracked his window a little bit and said, 'Why do I have to step out of the car?'" Lane continues. "They said, 'Because we're telling you to.' He said, 'No, but I'll give you my license,' and he reaches over to get it. But when he does, they freak out and start screaming, 'Show us your hands! Get out of the car!'"

Amid the turmoil that followed, a cop jerked open the door to Jones's vehicle, prompting him to pull it shut again. But ultimately, he decided to dismount, "because they were threatening to shoot him," Lane says. "Then they manhandled him onto the ground and cuffed him as he was yelling, 'Why are you doing this? What are you doing?' And they yelled back, 'You're not complying.'"

These exchanges were recorded by various body cams worn by the officers, as was a comment made by one of the cops to a sergeant who arrived at the scene a little while later. Lane's version: "He says, 'He has Aurora plates. He didn't belong here.'"

Jones was ultimately arrested on what Lane calls "the usual range of charges, like failure to obey a lawful order. They're what I call 'disturbing the police.'" Officers also found less than a gram of cocaine in his possession.

Deon Jones on the ground after police bound his hands behind his back.
Denver Police Department via Killmer, Lane and Newman, LLP
In the end, though, "the DA dismissed it all, because there was no probable cause," Lane says. "He was doing absolutely nothing — just sitting in his car, waiting for a friend."

The whole matter might have faded away were it not for the video. As Lane puts it, "Body cams are my very best friend as a civil-rights lawyer. Before body cams, these cases wouldn't go anywhere. The cops would lie about what happened, and juries would believe the cops. But video doesn't lie. It continually catches cops in the act of being themselves."

Over the years, Lane has occasionally contacted public agencies before filing a lawsuit, to give them an opportunity to settle the conflict before taking it to court. But he didn't do so in this instance.

"I've had my fill of talking with Denver," he allows. "Talking is fine, but this time, they can talk over a nice, hot lawsuit. I'm not looking to give Denver any breaks."

Click to read the complete lawsuit. Continue to see a compilation of body-cam footage showing the incident, as shared by CBS4.