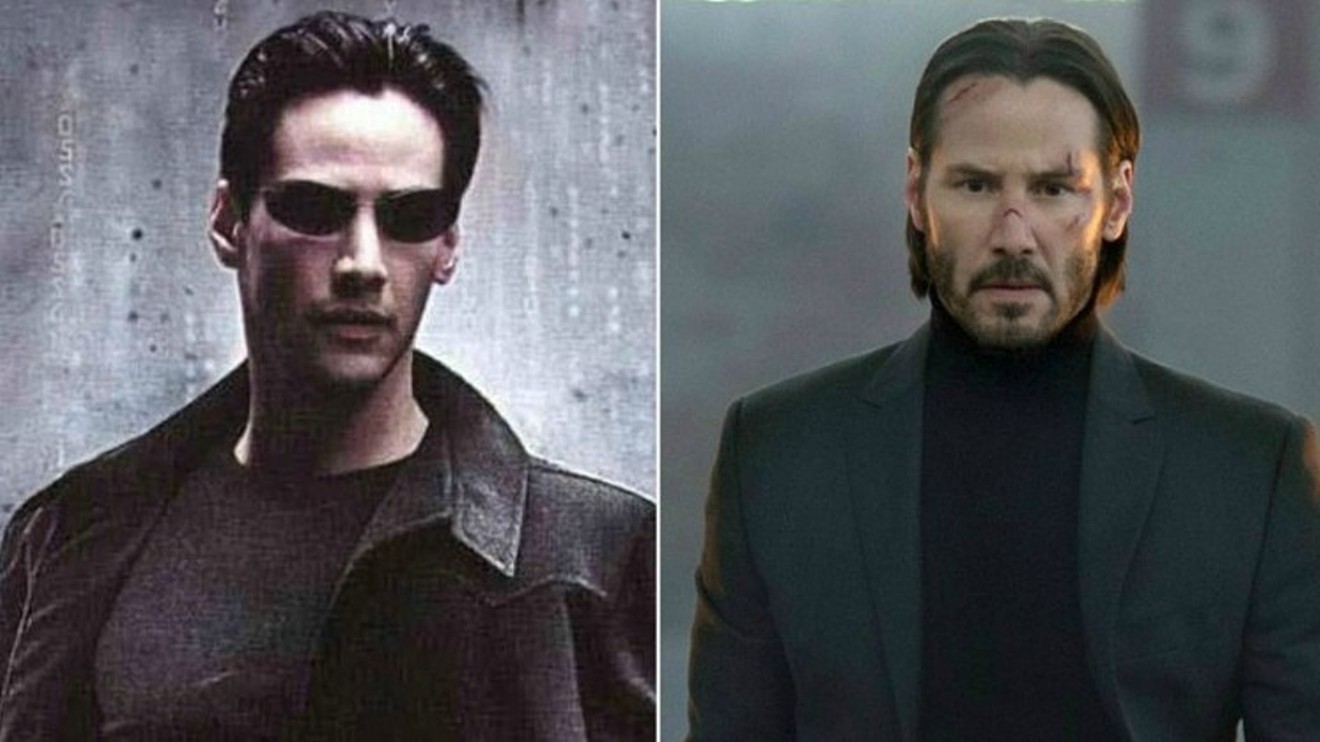 Keanu Reeves, as seen in The Matrix and John Wick, has been improperly blamed for two of the worst school shootings. File photos
Keanu Reeves might be known in Hollywood as a decent person, but to some in the gun debate, his films are the reason mass shooters carry out heinous crimes. Two days after the shooting in Parkland, Florida, that killed seventeen students and teachers at a high school, a Florida Republican argued that the violence in Reeves's John Wick films had glorified guns and desensitized viewers to their potential dangers. Representative Brian Mast did not, of course, argue that guns should be more closely regulated.

"What do we do with the biggest pusher of violence?" Mast asked on NPR. "The biggest pusher of violence is, hands down, Hollywood movies [and] hands down, the video-game market. When you look at Call of Duty — when you look at movies like John Wick — the societal impact of people being desensitized to killing in ways that are different than how someone on the battlefield is desensitized, is troubling, and very different."


Leave [Reeves] alone! He’s been through more shit than should be allowed and he’s been out of the media and jail. Blame all the games. The wonderful, violent video games.


Don't you dare bring video games into this. Don't be that dumb, c'mon. I've been playing since I was a kid and I have no plans on shooting anything up. Dismissed!


And then Kristi replies:


Yeah, but look at all the morons that do! I’ve owned guns my whole life and they never sneak out and kill people yet everyone is attacking them. Chill the fuck out.

A photo of Garfield County Sheriff Lou Vallario from the office's website.
garcosheriff.com
"Sheriff: Blaming School Killings on Guns Is Like Blaming Burglaries on Locks"

Mast's mention of John Wick, a revenge flick with a high body count that stars Reeves as the title character, echoes the many post-Columbine attempts to suggest that killers Eric Harris and Dylan Klebold were inspired by The Matrix based largely on its popularity at the time of the killings and their fondness for long jackets of the sort worn by Neo, the central figure portrayed by Reeves.

Granted, Reeves wasn't the sole target of such accusations. After Columbine, fingers were pointed at video games along the lines of Doom, which boasts a first-person shooter format, musical acts including Marilyn Manson and Rammstein, and even other movies. Take this nonsensical rant from Jeff Sessions, the current attorney general but then a senator from Alabama, in which he complained that youths "are able to rent from the video store — not just go down and see Natural Born Killers or The Basketball Diaries — but they are able to bring it home and watch it repeatedly. ... Many have said this murder was very much akin to The Basketball Diaries, in which a student goes in and shoots others in the classroom. I have seen a video of that, and many others may have."

Still, the idea that The Matrix may have influenced the Columbine attack is arguably the culture-war claim that's lingered the longest, in part because folks on opposite sides of the ideological divide have seriously considered it. Among the treatises about the subject that linger online nearly two decades after the horrific episode is a jeremiad from Michael A. Hoffman, who's been described as a conspiracy theorist and Holocaust denier, and a salvo by progressive writer and onetime Denver radio host Bob Harris that appeared in the liberal bible Mother Jones. And in 2008, upon the release of the sequel The Matrix Reloaded, ABC News cited Columbine in a piece headlined "Does The Matrix Inspire the Disturbed?"