His constituents turned out, even if Cory Gardner didn't. Brandon Marshall
Cory Gardner didn't show up to a town hall meeting planned in his honor, but Representative Jared Polis will have two in the Second Congressional District on Sunday. If that's not enough political action, you can sit through an entire day of the Colorado Democratic Party Reorganization meeting, or party with GENeration Frontlines, a benefit for the Youth of Standing Rock. Keep reading for details of these events, and more. 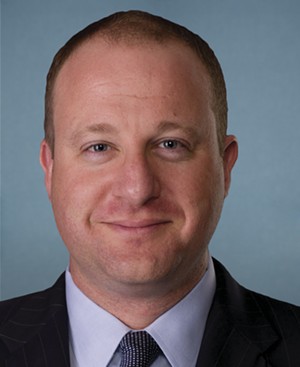 Jared Polis will hold two town halls.
polis.house.gov
Boulder County Town Hall With Congressman Jared Polis
Broomfield High School, 1 Eagle Way
Constituents are invited to Representative Jared Polis's town hall to talk about the economy, health care, immigration, education, the environment and other policy areas. "One of my top priorities is to be as accessible as possible to my community," says Polis. "I serve the people, and to do that effectively, I have to first listen. It's the favorite part of my job as a member of Congress. I get terrific input, feedback and ideas from our town halls." Want to be sure you have a seat? Register here.

Thursday, March 16, 6 p.m.: Fcmoa Book Club, Between the World and Me. In a series of essays, written as a letter to his son, Ta-Nehisi Coates confronts the notion of race in America and how it has shaped American history, many times at the cost of black bodies and lives. The discussion is at the Fort Collins Museum of Art, 201 South College Avenue.

Find out more on the Lincoln Center website or the Fort Collins Museum of Art site.

Know of an event that should be included in our roundup of political action and education activities along the Front Range? Send information to [email protected]