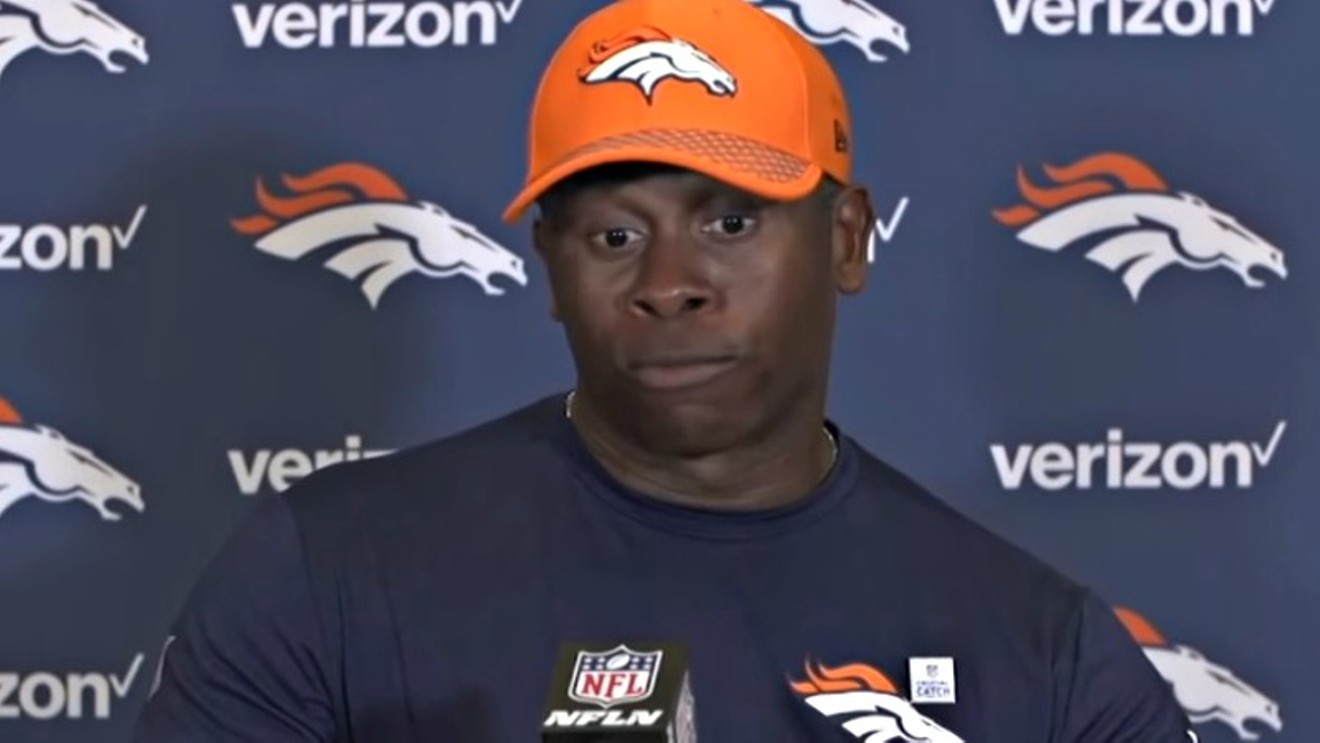 It's only seven regular season games into Vance Joseph's NFL head-coaching career, but he's already on the hot seat. YouTube
During and after the October 30 Monday Night Football match-up between your Denver Broncos and the Kansas City Chiefs, which ended with a 29-19 KC victory, fans of the Mile High City squad vented on Twitter, with many of them directing their anger at first-year coach Vance Joseph. As you'll see in our roundup of the most memorable tweets, the hashtag #FireVance has become a thing.

The Broncos defense remains a marvel, and it kept the team within a single score well into the second half despite a performance by quarterback Trevor Siemian that was inept on a cosmic level; during the first half, he completed just five of fourteen passes for a whopping 56 yards. Not that Siemian was the only offensive player whose efforts were truly offensive. Plenty of his fellows joined him in mediocrity, including running back Jamal Charles, who justified the decision by the Chiefs to give up on him by fumbling on his third carry — a gaffe that resulted in a Kansas City touchdown. (Broncos turnover total for the contest: five.) But it's abundantly clear by now that while Trevor may eke out an NFL career as a competent backup QB, he doesn't have the stuff to lead a quality unit.

Denver has the ingredients to be such a team — which is why Joseph (whom some Broncos loyalists lobbied against hiring in the first place) has become the target for frustration. He seems to be on the same trajectory as failed head coach Josh McDaniels, pink-slipped in 2010.

Don't expect the hammer to fall on Joseph immediately. After all, even McDaniels lasted for the better part of two seasons. But Denver supporters won't accept failure, and with a current record of 3-4, the Broncos definitely fit the definition. Some fans are already so sure the D-town crew has no chance that they've stopped watching the games; see the second post here. And while Broncos Nation was calling for Siemian to be replaced by Colin Kaepernick or Tim Tebow last week, following Denver's defeat by the Los Angeles Chargers, you'll never guess who our number-one tweeter would like to see under center instead.

Count down the twenty most memorable tweets about Joseph in regard to the catastrophe in Kansas City below.

I mean, like, this is gonna turn into the Dolphins w/ Jay Cutler! Bench Trevor... NOW. And fire Vance Joseph and Mike McCoy... NOW.

Bronco nation wants Elway to fire Vance Joseph and sit Seimen. FB is on fire with angry Bronco fans. The season is officially a train wreck

@johnelway been a bronco fan for 34 years & am more embarrassed by this team than any other team I have ever seen in Denver! #fireVance

# fire vance Joseph, #trade Siemian this is unacceptable for this organization

FIRE VANCE JOSEPH FOR HAVING TOO MUCH BELIEF IN @TrevorSiemian! GIVE SOMEONE ELSE A CHANCE TO WASTE THIS TOP NOTCH DEFENSE!! TRADE ALL 3 QBs

FIRE VANCE JOSEPH for keeping @TrevorSiemian in this game.

@NFL Vance Joseph won't bench Trevor no matter how poor he plays? FIRE HIM ELWAY. Neither of them are the answer!

Can we fire Vance Joseph please

If they fire Vance Joseph today - would it be the fastest firing ever?

Vance Joseph doesn't give a shit about this team. If he did, we wouldn't be 3-4. #FireVance

I didn’t even bother to turn on the game, and based on your own attack on your own team I’m glad I didn’t waste my time. #firevance