Mark Antonation
Ad Hominem, the avant garde restaurant that opened last spring at 43 West Ninth Avenue, is further proof that running a restaurant in the Golden Triangle is far from a sure thing, despite the expendable income of the neighborhood's residents.

Ad Hominem closed in late February for maintenance, according to a sign on the door at the time. Since then that notice has been replaced with another that reads "closed till further notice." Will Ad Hominem ever reopen? We were unable to get in touch with management, but based on the near-empty dining room over the past couple of months, the odds are slim. 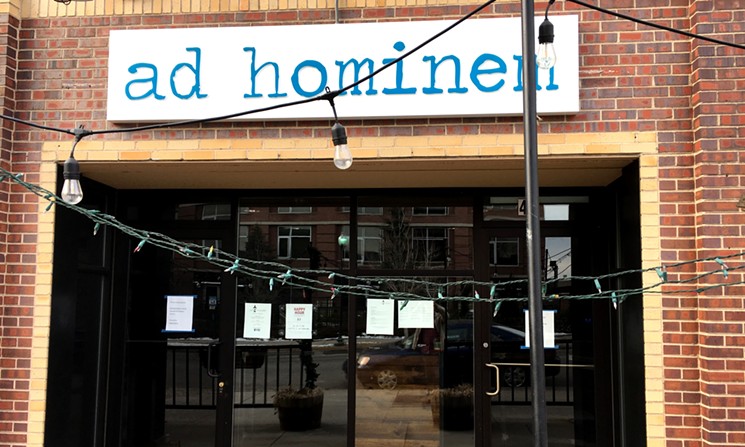 Mark Antonation
Ad Hominem showed great promise when it opened on the first weekend of April 2018 with a far-reaching menu of small plates inspired by Colorado meats and produce and international flavors. Opening chef Christopher Martinez went on to earn the Exceptional Newcomer award from the Colorado Restaurant Association in September.

Before Ad Hominem came to the neighborhood, the address was home to Charcoal from 2011 to 2017. The Golden Triangle, especially where it borders Capitol Hill along Lincoln Street, has had a hard time maintaining a solid restaurant base. Vacancies still persist at the former Dazzle, Opal and DJ's 9th Avenue Bistro spaces, among others, and other restaurant addresses have shown high turnover or have been converted into other types of businesses. Still, the success of newcomers like Broadway Market and Leven Deli prove that a solid concept can work.
KEEP WESTWORD FREE... Since we started Westword, it has been defined as the free, independent voice of Denver, and we'd like to keep it that way. With local media under siege, it's more important than ever for us to rally support behind funding our local journalism. You can help by participating in our "I Support" program, allowing us to keep offering readers access to our incisive coverage of local news, food and culture with no paywalls.
Make a one-time donation today for as little as $1.