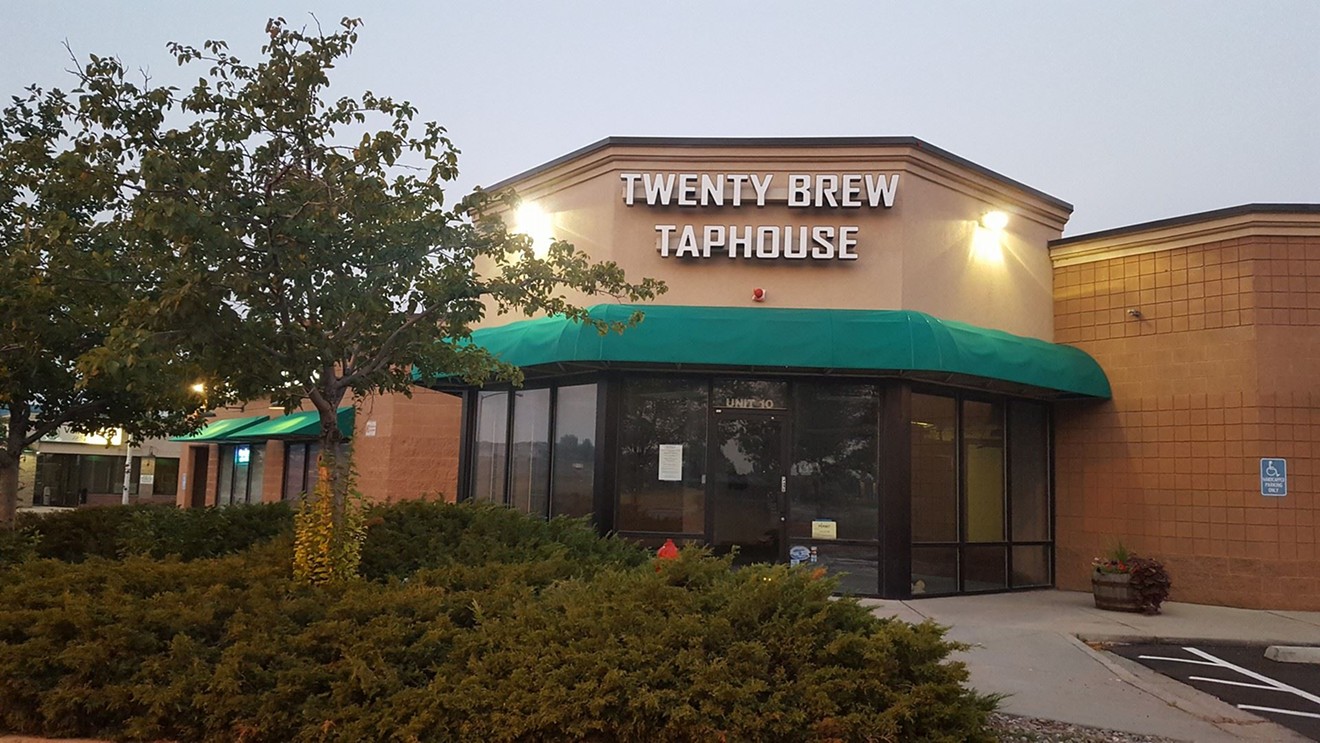 Twenty Brew Taphouse
Earlier this month, the owner of Twenty Brew Taphouse in Westminster posted a plaintive note on Facebook stating the business was no longer sustainable and could close in early 2018. Part of the reason: a break-in last fall that resulted in the theft of rare beer, new furniture, a pool table and other items. Furthermore, owner David Jamison says the incident has been emotionally difficult for him.

"I think it's amazing that the local craft beer community is helping a small business and their owner," Means says in an email about the response from the breweries who offered to pitch in some of their beer.

Find the rest of this week's craft-beer events below.

River North Brewery
Saturday, December 30
Just in time to ring in the new year, Fermaentra Brewing will release bottles of its decadent, 11.8 percent ABV Bourbon Barrel Aged Meristem Russian Imperial Stout ($12 for a 375-ml bottle). This version is "thicker and bolder than its predecessors, as it reveals richer flavors of caramelized brown sugar, milk and dark chocolate, coffee, vanilla, oak and that unique Laws Whiskey House small-batch bourbon character from the barrel in which it was aged," the brewery says. "We think it’s our finest barrel-aged imperial stout yet and recommend letting it slightly warm up from cold storage, as the noted flavors really unfurl as you approach the higher 40s to mid-50s in beer temperature. Enjoy now or cellar for the years to come." The beer will not be on tap.

River North Brewery is rounding off its Single Cask program for the year with one of its most "exotic" releases to date, a tripel aged in a lone Manhattan cocktail barrel. "Designed to showcase the essence of a single barrel, all Single Cask beers are only available in the taproom," River North says.

Freshcraft will tap 6X9 IPA at 2 p.m. The beer is a hoppy collaboration between Wyoming's Melvin Brewing and San Diego County's Alpine Brewing. You can find both versions on tap, along with Alpine Pure Hoppiness and Melvin Asterisk.

Renegade Brewing
Sunday, December 31
Epic Brewing brings back its Coast to Coast New Year's Eve Party, where you can celebrate the new year four times starting at 9 p.m.  Each hour, Epic will count down the minutes to 2018 from East Coast to West Coast and serve up a themed buffet of bar fare from major cities in each time zone, along with a special beer pairing. DJ Eerie will keep the night going by spinning tunes for each city celebration: New York, Chicago, Denver and Portland. Tickets for the entire shindig, $60, are available at eventbrite.com.

Ratio Beerworks will ring in the New Year with special-release firkins (including a champagne-y firkin and a special variant take on Genius Wizard Imperial Stout), late-night snacks, dance partying and a balloon-and-keg drop at midnight. The Mystery Sisters DJ Duo will be spinning vinyl punk and dance tracks. Finally, right before midnight, the brewery will pop a magnum of a special Ratio beer and hand out free tasters.

Fiction Beer Company hosts its fourth annual New Year's Eve Party starting at 7 p.m. There will be specialty tappings (TBD), live music from the Dollhouse Thieves at 9 p.m., a beer that was brewed just for toasting the New Year, a heated covered patio and complimentary New Year's party favors.

Depravity, Renegade Brewing's stellar imperial peanut butter cup stout, will make its annual appearance on New Year's Eve day. Quantities are limited, so there will be a limit of one case per person. Live screen printing will be provided by Indy Ink; the first thirty people will get a free Depravity T-shirt. The Ham Bone Thieves will be in the house later in the evening playing hits from musicians who passed away in 2017.

Jonathan Shikes
Thursday, January 4
The three-day long Big Beers, Belgians & Barleywines Festival kicks off today in Breckenridge where hundreds of beer brewers, owners and fans will convene for a host of seminars, pairing dinners, tastings, a large festival and all-out partying. Although some of the festival events are sold out, there are still tickets left for the commercial tasting on Saturday — one of the best, most important tastings of the year in Colorado — along with some seminars, and the Calibration Dinner, which is hosted by Adam Avery of Avery Brewing and Bryan Selders of Dogfish Head Craft Brewery (and formerly of The Post. There are also various tappings and other beer-related activities around all weekend. Get more information at bigbeersfestival.com.

Whether you're heading up to the Big Beers fest in Breckenridge, going skiing or just tooling around the foothills, stop by Westbound & Down Brewing in Idaho Springs for its first-ever bottle release, starting at 11 a.m. The Golden Sour was aged for eight months in American oak California red wine barrels with Powder Keg Brewing’s house yeast culture. It was then aged an additional two months with massive amounts of Palisade peaches (more than three peaches per bottle). There are only 120 bottles for sale, $25, with a limit of two per person.

Saturday, January 6
Black Shirt Brewing will release Fourtrack Porter — a longtime taproom staple — in canned six-packs for the first time, starting at 11 a.m. "With an American nod to English tradition, Fourtrack is silky and rounded with notes of milk chocolate, caramel and toffee that gives a semi-sweet and yummy finish," the brewery says. Later in the day, at 7 p.m., the Ham Bone Thieves will be honoring musicians who died in 2017 — like Tom Petty, Chuck Berry and Gregg Allman — by playing their songs.

Friday, January 12
Jagged Mountain Craft Brewery tasked its taproom staff with creating six unique stouts, all of which will be tapped today for a mini competition called Stout Wars. You can vote for your favorite and help the brewery crown a winner at the end of the night. A flight of four, along with one pint and a custom glass, is $15.

Last October, Greeley's Wiley Roots Brewing took home a gold medal at the Great American Beer Festival for its Funk Yo Couch, a mixed-culture Brettanomyces saison. Now the brewery is releasing Galaxy Dry Hopped Funk Yo Couch — but in a very unusual way. Rather than letting the yeast continue to activate in bottles, which is what most breweries do, Wiley Roots is experimenting with can conditioning. This is Colorado, after all. "As is the case with all of our mixed culture beers, we add additional sugar and yeast to the packaging tank and allow the beer to re-ferment in the package — whether that be a bottle, keg or can," the brewery explains. "This helps to ensure the beer is as stable as can be for as long as possible, but also shows reverence to the old-world styles from which these beers have drawn influence." Four-packs of twelve-ounce cans cost $15 and will be available in the Greeley taproom, and later, in just six liquor stores: Mile High Wine and Spirits in Lakewood, Mr. B's Wine & Spirits (both downtown and in the Stanley Markeplace); Mondo Vino, Wyatt's Wet Goods in Longmont; and Basecamp Wine and Spirits in Frisco.

Saturday, January 13
Powder Keg Brewing in Niwot releases its Bourbon Barrel Aged Supervoid Imperial Stout in bomber bottles at noon. "Thick and viscous, this beer has huge notes of bittersweet chocolate with balance of roasty undertones. The mouthfeel is absolutely outrageous due to the huge portion of the grist made up of aat malt," the brewery says. Bottles are $24 each.

Friday, January 19
Mockery Brewing is excited to announce the return of its very first bottle release — and one of its favorite beers — Schizophrenic Narcoleptic. "A bigger, badder version of our Export Coffee Stout aged twice as long in artisanal vanilla extract barrels that resulted in a harmonic melding of roasted grains, smooth cold brewed coffee and a semi sweet dessert-like finish," the brewery says. Bottles will be on sale at 2 p.m.

Saturday, January 20
If you've been to a beer festival or a brewery at some point in the past four years, there's a good chance you've seen Dustin Hall, quietly, kindly taking photos of everyone and everything. Over that time, he has ceaselessly traveled the state, recording the craft-beer industry and garnering goodwill. Although photographing breweries and the people who work there began as a hobby for Hall, it's become an all-consuming passion, and after a couple years of work, he and his wife, Marcia, are finally releasing Discovering Colorado Breweries, a 232-page coffee table book featuring photographs of more than seventy Colorado breweries. The official book release takes place from 1 to 5 p.m. at Falling Rock Taphouse, where the Halls and their Brewtography Project will be celebrating and signing copies of the book, which retails for $49.99. This will also be the time for people who supported the Brewtography Project's successful Kickstarter campaign to pick up their rewards; anyone who buys a copy of the book will also received a free beer. For more information on the project, where to buy the book and other events surrounding its release, go to brewtographyproject.com.