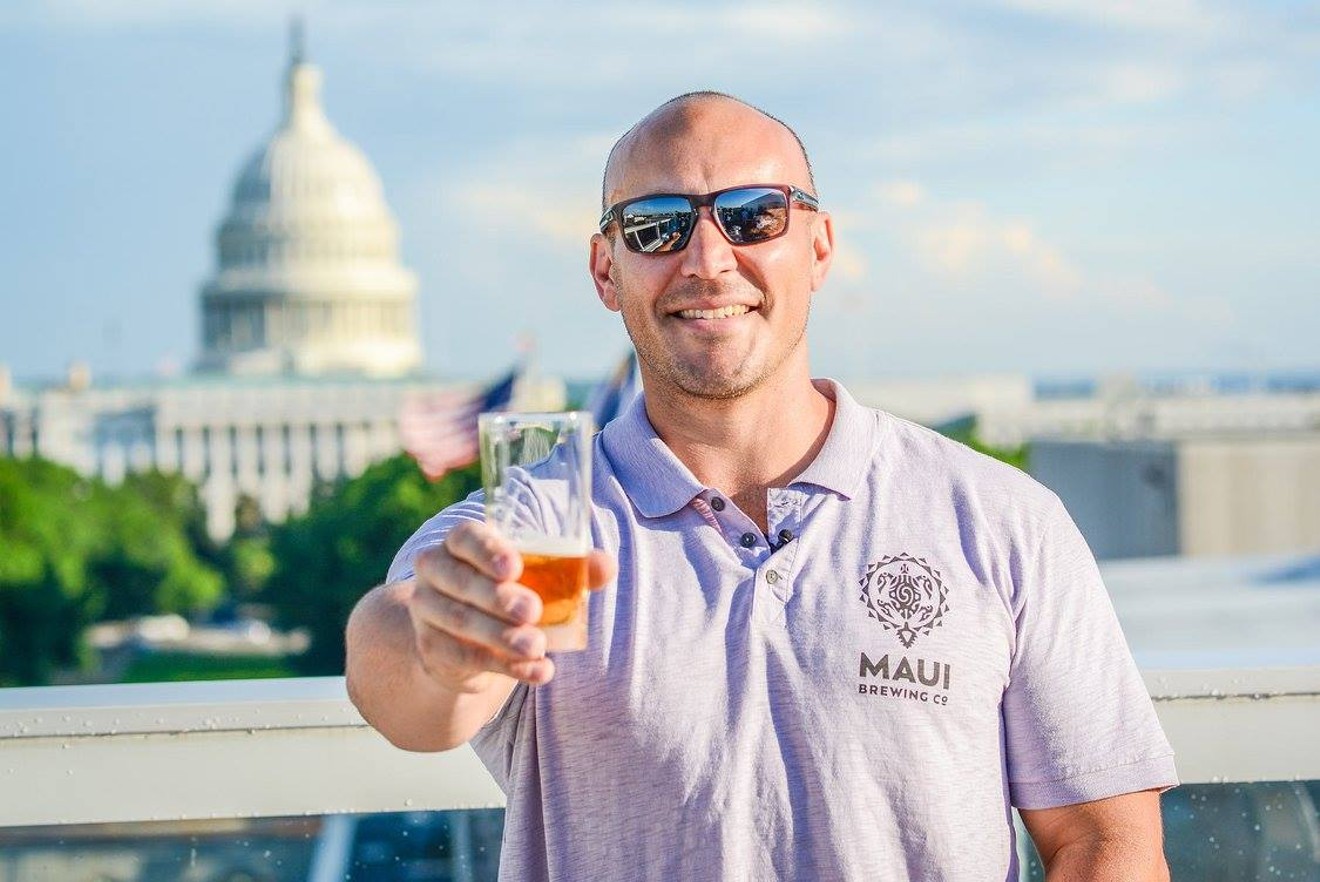 Brewers Association
Well, this is awkward. The massive Republican-created, Trump-endorsed tax bill that will pass today — slashing taxes for corporations and the rich — will also supposedly benefit craft brewers. After years and years of fighting, the Boulder-based Brewers Association finally got its Craft Beverage Modernization and Tax Reform Act passed as part of the Tax Cut and Jobs Act, which will likely be sent on to the reality-TV star today for his signature.

“This is a monumental day for small and independent craft brewers...6,000 strong and located in every state and virtually every congressional district in the country... [that] are incredibly pleased Congress has recognized that they have great growth potential," BA president Bob Pease says in a statement. "Our expectation is that small brewers will use their savings related to the recalibration of the federal excise tax on beer to invest in their breweries, expand their operations, create more jobs and hire more American workers.

“For the better part of a decade, the BA has played a central role advocating for tax relief for small brewers," he continues. "We appreciate all the support and hard work from every corner of the country that brought this to fruition. This is a significant step forward representing over $142 million in annual savings for small brewers."

Ah, politics. Doesn't it make you want to drink another beer?

Continue reading for craft-beer events through the end of the month. 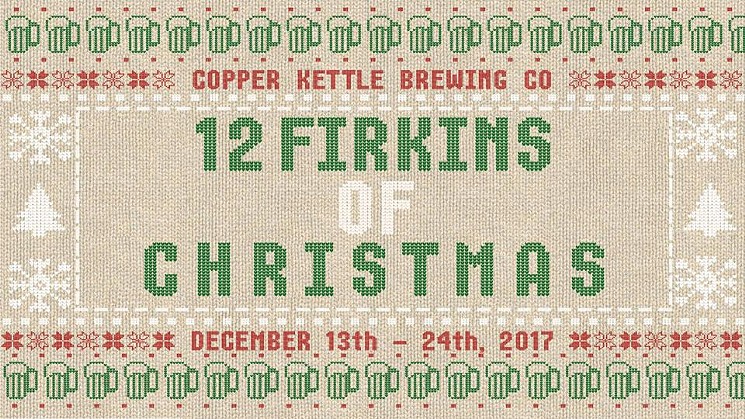 Black Shirt Brewing
Thursday, December 21
Do you like Black Shirt Brewing's Frontman IPA? Then you'll love Frontmaniac Double Dry Hopped IPA, an amped-up version of the brewery's flagship hoppy beer. Not only that, but Black Shirt is releasing it in four-packs (limit of one case per person). "Frontmaniac is brewed with oats, wheat and a blend of yeasts for a fuller and softer texture on the palate," the brewery says. "Bursting with tropical fruit notes, bright citrus characters and dark field grass, the palate is rich with these same hop characters and a rounded but firm bitterness."

Freshcraft hosts a Winter Solstice party with Surly Brewing at 7 p.m. Enjoy the darkest day of the year with Surly Abrasive, Surly Darkness 2017, Surly Damien and Surly Coffee Bender. There will also be bottles (on-site only) and pours available of Surly Barrel Aged Pentagram.

Ursula Brewing in Aurora releases the Sacred Fire Wee Heavy (both regular and rye barrel-aged) in honor of the Winter Solstice. Ursula describes it as "silky and smooth, with a huge toasted-marshmallow quality." The beer will be available all day, but the festivities — and food and fire — will start at 5:30 p.m.

Cedar Creek Pub, at 2100 Ursula Street in Aurora, gets dark with Surly Brewing. The bar taps the brewery's Darkness and Damien at noon, along with a few other dark surprises, including Ballast Point's High West Barrel Aged Victory at Sea.

4 Noses Brewing
Friday, December 22
4 Noses Brewing in Broomfield releases the latest in its Ad Hoc series at 2 p.m. on draft and in cans. The beer, Whimsy, is described as "a bright New England Style India Pale Ale, reminiscent of citrus fruits from the massive amounts of Citra, Amarillo and Jarrylo hops."

To make the 13.3 percent ABV Beasts of Bourbon, Liquid Mechanics Brewing in Lafayette took its Russian Imperial Stout, which had been aged in Spirit Hound Distillery barrels for eleven months, and blended it with an American Barleywine that had been aged on Breckenridge Distillery barrels for eleven months. "This rare experiment paid off well. Beasts of Bourbon is smooth, with a nose hinting toward an American Barleywine," the brewery says. "The flavors are complex, but a dominant sweet milk chocolate note takes the center of the stage while silky bourbon flavors play in the background." It taps at 6 p.m., and there will be 100 22-ounce bottles as well, with a limit of two per person.

Station 26 Brewing
Saturday, December 23
Donut Panic, Fiction Beer Company's annual collaboration with Glazed & Confuzed Donuts, returns to the brewery. This year's doughnut beer is Chai-pple Pie Oatmeal Stout, which was brewed with vanilla, cinnamon, Chai spices and, of course, doughnuts. The base beer is a "chewy, rich and smooth oatmeal stout," the brewery says. The inspiration for the beer was the Chai-pple Donut from Glazed & Confuzed, which was recently named one of the fourteen best doughnuts in the country by Zagat. Fiction will release the beer on tap and in a limited number of Crowlers. There will be doughnut pairings and a food truck.

Station 26 Brewing taps the latest in its milkshake series of fruited, flavored IPAs at 1 p.m. Blackberry Milkshake will be available in Crowlers (but only in a limited amount). Pints will be pouring until the beer is gone.

River North Brewery opens up its cellar for an end-of-the-year Cellar Sale starting at noon. There will be limited bottles available of numerous beers, including barrel-aged specialties. For the list, go to the brewery's Facebook page.

Odd13 Brewing in Lafayette says it couldn't resist bringing back Codename: Holidayfan, "the most ridiculous Codename variant that we have ever produced," for the holidays. The triple IPA comes in at 10 percent ABV and will be available on tap and in cans to go. It's $18 for a six-pack, with a limit of two cases per person.

Monday, December 25
Are any breweries open on Christmas? Yep. Alpine Dog Brewing, for one, will bring back its fourth annual Christmas Day Party starting at 11 a.m. This year, the brewery will serve an imperial porter aged in Dominican rum barrels with Madagascar vanilla beans and cacao nibs. At noon, they will also tap a firkin of French Toast Red, made with maple, vanilla and cinnamon. Bottle-release details and Christmas treats are TBD.

Fermaentra Brewing
Saturday, December 30
Just in time to ring in the New Year, Fermaentra Brewing will release bottles of its decadent, 11.8 percent ABV Bourbon Barrel Aged Meristem Russian Imperial Stout ($12 for a 375-ml bottle). This version is "thicker and bolder than its predecessors, as it reveals richer flavors of carmelized brown sugar, milk and dark chocolate, coffee, vanilla, oak and that unique Laws Whiskey House small-batch bourbon character from the barrel in which it was aged," the brewery says. "We think it’s our finest barrel-aged imperial stout yet and recommend letting it slightly warm up from cold storage, as the noted flavors really unfurl as you approach the higher 40s to mid-50s in beer temperature. Enjoy now or cellar for the years to come." The beer won't be on tap.

Sunday, December 31
Epic Brewing brings back its Coast to Coast New Year's Eve Party, where you can celebrate the new year four times starting at 9 p.m.  Each hour, Epic will count down the minutes to 2018 from East Coast to West Coast and serve up a themed buffet of bar fare from major cities in each time zone, along with a special beer pairing. DJ Eerie will keep the night going by spinning tunes for each city celebration: New York, Chicago, Denver and Portland. Tickets for the entire shindig, $60, are available at eventbrite.com.

Ratio Beerworks will ring in the New Year with special release firkins (including a champagne-y firkin, and a special variant take on Genius Wizard Imperial Stout), late-night snacks, dance partying and a balloon-and-keg drop at midnight. The Mystery Sisters DJ Duo will be spinning vinyl punk and dance tracks. Finally, right before midnight, the brewery will pop a magnum of a special Ratio beer and hand out free tasters.

Fiction Beer Company hosts its fourth annual New Year's Eve Party starting at 7 p.m. There will be specialty tappings (TBD), live music from the Dollhouse Thieves at 9 p.m., a beer that was brewed just for toasting the New Year, a heated covered patio and complimentary New Year's party favors.

Depravity, Renegade Brewing's stellar Imperial Peanut Butter Cup Stout, will make its annual appearance on New Year's Eve day once again. Quantities are limited, and there is a limit of one case per person. Live screen printing will be provided by Indy Ink; the first thirty people will get a free Depravity T-shirt. The Ham Bone Thieves will be in the house later in the evening playing hits from musicians who passed away in 2017.