These Restaurants Are Serving Craft Cocktails to Go 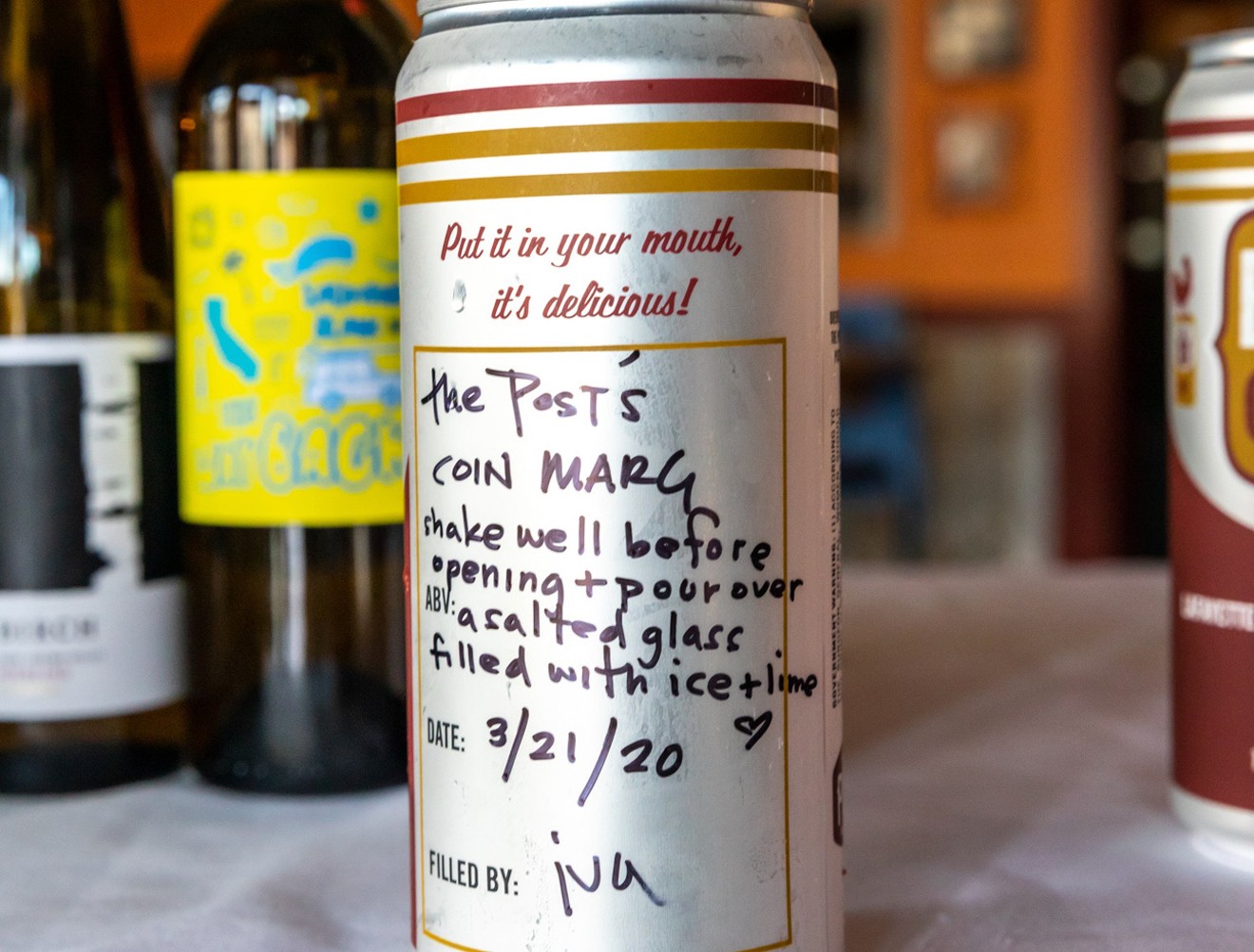 It's official — there's a silver lining for restaurants to the massive shutdown and underlining fear of the coronavirus: Eateries can sell cocktails to go. We're not talking a bottle of booze or a six-pack of beer, though you can easily get those, too. Instead, top-notch bars and restaurants are mixing up their spirits to send you home with tasty tipples in easy-to-pour batches. Plan a "night out" and indulge in one of these specials: Not only do you get a good drink for the virtual happy hour, but you help support an industry hit hard by restaurant shutdowns.

One of the many cocktails you can get from American Elm, though in a to-go cup.
Jordan Hutchison
American Elm
4132 West 38th Avenue
720-749-3186
With a list of more than thirty drinks to choose from, you can bet the bartenders at this Berkeley restaurant are busy whipping up cocktails to go. Pick from the lemon-tinged Juicy J or the strawberry-laced Anything for Selenas, for example. Soon, says bar manager Jesse Torres, you'll also be able to order large-format batched cocktails, which will serve about six. Not only that, but guests can get cans of beer and any bottle off the wine list and weekly meals that provide food for several days. Order online for pick-up or delivery daily, starting at 4 p.m.

Bar Helix
3440 Larimer Street
720-449-8587
Although the final list and details have yet to be determined, Bar Helix owner Kendra Anderson says she is ready to start selling her delicious drinks to go beginning Friday, March 27. Think the Bar Helix Negroni, Starf*cker Negroni, a classic Negroni, the bourbon-laced Boulevardier and a Smoke and Mirrors, a Negroni made with mezcal instead of gin. Anderson also wants to provide kits to make martinis, Aperol spritzes and margaritas at home. The idea, she says, is to sell these cocktails on Mondays, Wednesdays and Fridays from noon until 6 p.m. Each batch of cocktails will cost around $90 and serves six to eight people. Call ahead to make your order and check the Bar Helix Facebook page for updates.

Barolo Grill
3030 East Sixth Avenue
303-393-1040
The bartenders at this Cherry Creek mainstay are pouring to-go containers of cocktails, including batched drinks such as the When Life Gives You Lemons, a two-person kit with Malfy Limone gin, Fever Tree Indian tonic, tarragon, lemon and peppercorn; or the four-person spritz kit with Aperol, orange slices and prosecco, along with single-serving Boulevardiers and other classics. Order online and then hunker down with a bowl of wild boar and barley soup, housemade mushroom tagliatelle and fresh rosemary foccacia; then pour your favorite wine or one of these drinks and call it a good night. Order online for curbside pick-up Tuesday through Sunday from 4 to 8 p.m.; prices start at $8 for a single cocktail and up to $32 for a kit.

Chow Morso
1500 Wynkoop Street
720-639-4089
Monday through Saturday from 4 to 8 p.m., fans of Ryan Fletter's Italian joint can order online cocktails for curbside pick-up along with to-go containers of lasagna and pasta Bolognese. On the drink side, choose from the osteria's barrel-aged cocktails, such as the signature martini, the Rye High Plane (a take on the Paper Plane drink made with Aperol, Amaro Nonino), and High West Double Rye and lemon. Also try the aged Morso Martini, made with Purus Organic Italian Vodka that's undergone an olive-oil fat wash, so the vodka picks up the flavor without the oil. Once you're settled in back at home, pour over ice or shake for a cold, smooth cocktail.

Family Jones Spirit House
3245 Osage Street
303-481-8185
For $45 take home a specialty mixer and a 750-ml bottle of Jones house gin or vodka, perfect for making a dozen cocktails or a hearty punch at home. Expect drinks such as Passion Punch, with lime, passion fruit, simple syrup and bitters; Emperor Lemonade, with lemon, ginger simple syrup and chai tea; and Springs Garden, with grapefruit juice, bitter lemon simple syrup, and pink peppercorn dust. There's the $36 Automatic Jones, too, a ready-to-pour Rock and Rye cocktail in a 750-ml bottle. Also pick up an extra bottle of the rum, bourbon, rye and other spirits and get a $10 gift card for when the distillery-restaurant reopens its dining room. As a bonus, 50 percent of the proceeds are going to a fund to help the employees of Family Jones. Pick up the booze from noon to 8 p.m. daily.

Take a can of Boulevardier home from Il Posto in RiNo.
Il Posto
Il Posto
2601 Larimer Street
303-394-0100
ilpostodenver.com
Who doesn't need canned, bubbly Boulevardiers in their isolated lives? At Il Posto, you can pick up a single for $8 or a whole six-pack for $29. In each 12-ounce can, there's a nice balance of Buffalo Trace bourbon, Cinzano sweet vermouth and Antica bitters. It travels well and can be thrown in the fridge to chill it down before pouring on ice. Plus, this drink tastes great with the grab-and-go bites coming out of this RiNo Italian joint, such as mushroom risotto and chicken Milanese. Order from the takeout menu by calling the restaurant's number.