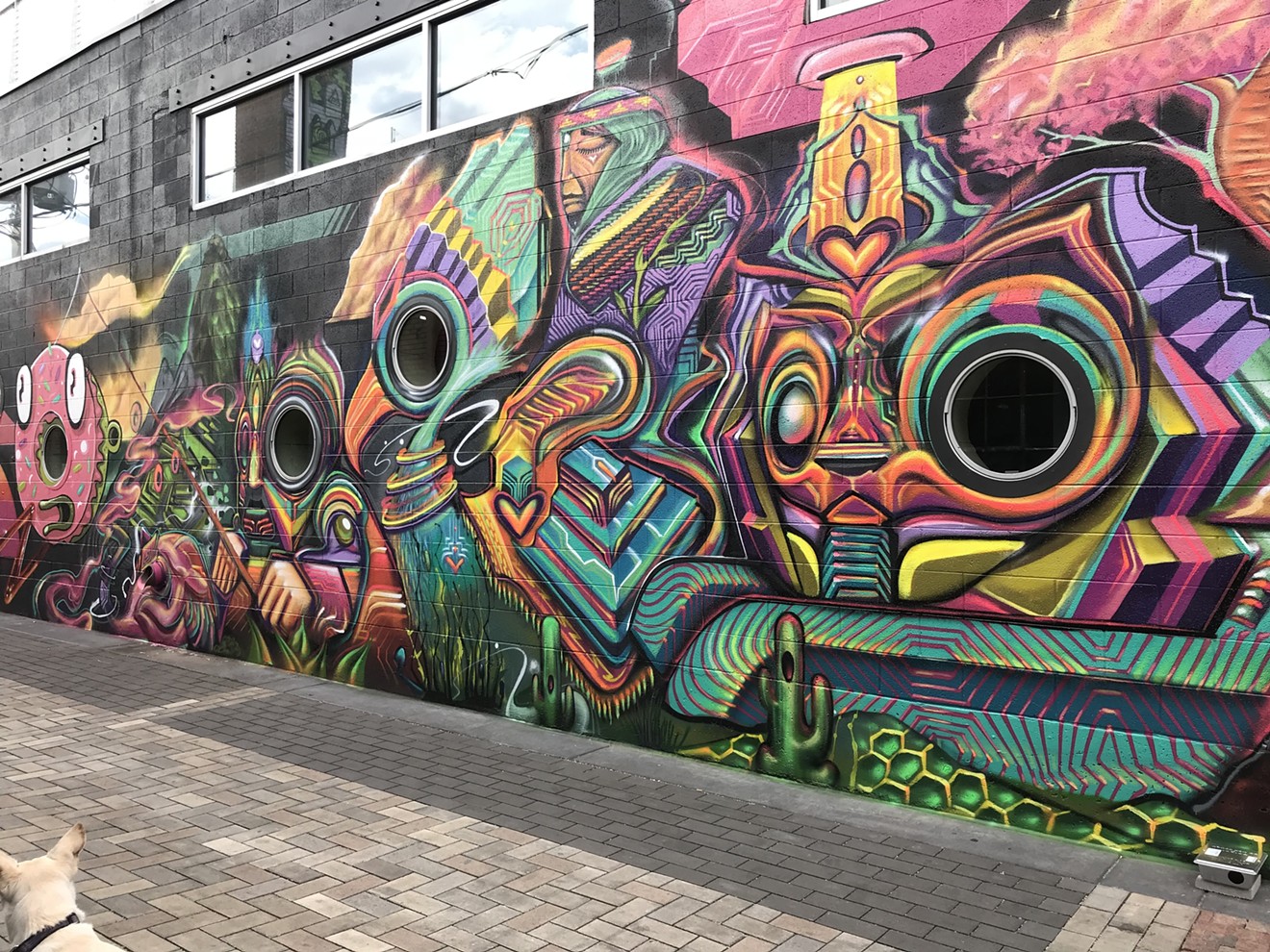 Kick off Crush Walls with craft beverages. Courtesy of RiNo Art District
September starts out strong with the final day of A Taste of Colorado, as well as a trio of festivals celebrating everything from food to drink to street art. Here are six sweet and savory events to choose from this week, as well as more to put on the culinary calendar for fall.

Monday, September 2
Labor Day brunch offers a battle of two over-the-top pop divas — and you'll have ringside seats and $5 drinks for the carnage. Postino, 2715 17th Street, is serving brunch on Monday, September 2, with a Madonna v. Lady Gaga soundtrack. Starting at 9 a.m. (though Madge and the Gags would never get out of bed that early), the wine bar is offering a refreshingly affordable brunch (nothing is priced over $10.50) with $5 pitchers of beer, wines by the glass and mimosas until 3 p.m. So put on your meat dress and cone bra and settle in for a long, boozy meal accompanied by dueling tracks from two musical legends.

Kick off Crush Walls, RiNo's graffiti and street art fest, with a bash at Denver Central Market. Ten years ago (before the ’hood was the site of fancy food courts, trendsetting tasting rooms and fistfights over parking spots), the festival was born as way to highlight the talents of the artists who lived and worked in the area. Even if those artists have mostly been priced out, the tradition hangs on, and the Market at 2669 Larimer Street is hosting the opening party from noon to 5 p.m. on Monday, September 2. Fifteen of north Denver's hottest beverage producers (including Infinite Monkey Theorem, Ratio Beerworks, River North Brewery, Our Mutual Friend and Stem Ciders) will be pouring the drinks that helped transform a gritty industrial area of town into one beset by pedal bars plodding along at five miles per hour. Visit the Crush Walls website for more information and to RSVP to the event.


Tuesday, September 3
If you're a fan of Shonen Knife, the legendary, relentlessly chipper, sassy punk-pop outfit from Japan, you probably already have tickets to the trio's Tuesday, September 3, show. But for a mere $22, you can also get a bowl of ramen, a drink and the chance to fawn over the ladies in person at a meet-and-greet at Ratio Beerworks, featuring dinner from Osaka Ramen. At 6:30 p.m., the taproom at 2920 Larimer Street will be serving a bowl of seasonal corn ramen alongside a Ratio beer, and you'll get to meet the Japanese candy punk princesses prior to their high-energy show at the Oriental Theater (for which tickets are still available). Get more details on the Ratio Beerworks Facebook page. 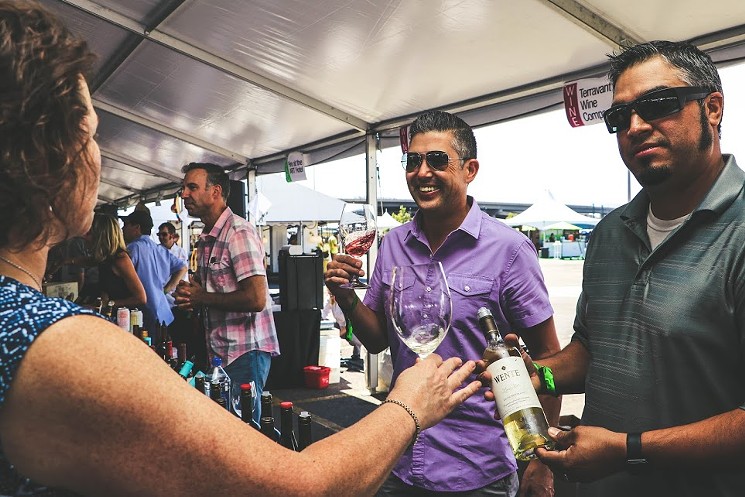 The Grand Tasting is Denver Food and Wine's capstone event.
Troy Schieman for Denver Food + Wine Festival
Wednesday, September 4
So far, September hasn't delivered the cooler temps we were hoping for, but the return of the Denver Food and Wine Festival is a sure thing. From Wednesday, September 4, through Sunday, September 8, restaurants around town will be turning out immaculately plated food, and the wine will be flowing freely. There are annual events (the Riedel wine glass seminar, good for those who want to appear über-sophisticated while sipping — or just those who've broken the majority of their glassware, since you'll be going home with a set of four glasses); bougie events (Dinner Under the Stars, this year taking place at our favorite Italian restaurant in a brewery, Liberati); crowd-pleasers (a patio party at Cattivella); the marquee event (the Grand Tasting, with over 700 wines and spirits, chef demos and food from forty top Denver restaurants); and a Sunday brunch (again at Liberati) that's sure to pave your way smoothly from hangover to Sunday Funday. Tickets run from $45 to $150 and are available on the festival's website.

Thursday, September 5
Technically, it's still summer, but Labor Day — after which you can't wear white or drink rosé, according to your grandma — has passed, so let's retire the pink drinks and break out the stiff stuff. If nothing else, it will distract us from the fact that it's still blistering hot. Make the changeover at the Bartender's Bash on Thursday, September 5. Exdo Event Center, 1399 35th Street, is hosting a baker's dozen of bartenders from Denver's top bars and restaurants (Lady Jane, Mercantile Dining & Provision and Bar Dough among them), who will be mixing up tequila, bourbon, gin, brandy and, memorably, Jägermeister and rum, to pair with food from Mizuna, Tap & Burger, Woodie Fisher and more. Tickets for the 6:30 p.m. event, $45 to $60, include bottomless booze and bites and are on sale now on the event website.

Leven Deli's smashed chickpea sandwich could be on the menu at A Denver Feast this Friday.
Mark Antonation
Friday, September 6
Worried you won't get your fill at Denver Food and Wine this weekend? We beg to differ, but if there's any lingering doubt in your mind, double up on food festivals by hitting A Denver Feast on Friday, September 6. From 7 to 10 p.m., nearly twenty local restaurants (including hot spots like Ophelia's Electric Soapbox, Chow Morso, Señor Bear and Leven Deli) will converge on the AC Hotel Denver, 750 15th Street, as part of the larger Hotel Thrillist weekend of events. Gasoline Lollipops (the band, not the dubiously flavored candy) will perform. Tickets, $55, are available on the event website right now.

Combine your love of the indoors and wine at the Vail Fall Food & Wine Classic.
Courtesy Taste of Vail
Friday, September 20, and Saturday, September 21
If you're like us, you spend most of September vowing to get up to the mountains and see the colors — only to be derailed by that bottle of wine in the fridge on Friday night, that new restaurant you've been meaning to try on Saturday and that ensuing hangover on Sunday. This year, plan ahead to combine all your interests (drinking, dining and saying how much you enjoy the outdoors while you're indoors, safe from bear attacks) at the Vail Fall Food & Wine Classic on Friday, September 20, and Saturday, September 21. The weekend includes Friday night wine dinners at restaurants around town, followed by Saturday morning excursions like biking, berry picking and bakasana (and other yoga poses) before the grand tasting of scores of wines from more than fifty producers. Tickets for the grand tasting will run you $85 on Taste of Vail's website, but the satisfaction of knowing you've finally — finally! — made it to the mountains in time to see the aspen turn is priceless.

Join Vesta for Plates for the Peak on October 3.
Aaron Thackeray
Thursday, October 3
Get a jump on the weekend Thursday, October 3, with Vesta's annual Plates for the Peak fundraiser, which benefits Urban Peak, a nonprofit organization that provides housing, outreach and educational support for young people between the ages of 15 and 24. From 6:30 to 9:30 p.m., the restaurant at 1822 Blake Street will host the casual event, with chefs from three of Denver's most beloved restaurants — good-times stalwarts Steuben's and Ace Eat Serve, along with their fine-dining big sister Vesta — turning out upscale American classics and excellent cocktails that will be sure to satisfy. Visit Urban Peak's website to purchase your tickets ($85 to $100, or spring for table service for groups of six or ten).

Mark Antonation
Sunday, October 6 through Sunday, October 10
Denver's Harvest Week doesn't begin until October 6, but if you want to snag tickets to any of the five multi-course meals, you'll need to grab your tickets ($85, including drinks) now. Dinners include a vegetarian meal with chefs from Luca, Urban Farmer, Acreage and the Regional; a zero-waste dinner from Super Mega Bien, Vesta and Bistro Vendôme; plus a straight-up eclectic meal combining the vastly different styles of Mercantile & Provision, Vine Street Pub, Rio Grande and Flagstaff House. All dinners start at 6 p.m. at the GrowHaus, 4751 York Street; visit Harvest Week's website to nab your seat at the table before they've been gleaned like the fields after harvest time.


Thursday, October 10, through Sunday, October 13
Flatirons Food Film Festival kicks off its seventh year on Thursday, October 10, and its program for the next four days is more wide-ranging than ever. This year's films shine a spotlight on immigrant and international cuisine, including a pair of films from Africa (Tazzeka from Morocco and Cook Off from Zimbabwe — we highly recommend a visit to one of the African Grill and Bar outposts prior to the screenings for a taste of the cuisine that's underrepresented in the Denver area). There will also be documentaries about Mexico's Diana Kennedy and a couple who traded in their city life for 200 acres of barren farmland; visual-art installations inspired by the films; interviews with chefs, sommeliers and farmers; and, of course, spreads of food from Japanese to Jewish deli. A festival pass will run you $90, with individual screenings and events starting at just $13 on the fest's website.

Westword's 2018 Feast included phyllo cups with pork-liver mousse from Brightmarten.
Danielle Lirette
Thursday, October 24
Feast, Westword's annual celebration of the Denver restaurant scene, will make its delicious return to the McNichols Building on a new day and time: 7 to 10 p.m. Thursday evening. As always, though, Feast will be a true feast for the senses, with music, beverage samplings and dishes from more than forty favorite restaurants. Among those already signed on to sample their food are Uchi, Jackdaw, Milk & Cake, The Veggie Whisperer, Roaming Buffalo Bar-B-Q and more. This year, VIP ticket-holders will again be treated to a special menu, this year courtesy of the world-renowned Matsuhisa. Bites from Matsuhisa will include spicy tuna crispy rice, chicken gyoza, black cod miso in limestone lettuce, and more, as well as special VIP cocktails to complement the menu. VIP tickets also include early entry into the event at 6 p.m. and a VIP gift bag. Tickets are now on sale for $30 general admission, $55 VIP at westwordfeast.com.

If you know of a date that should be on this calendar, send information to [email protected].
KEEP WESTWORD FREE... Since we started Westword, it has been defined as the free, independent voice of Denver, and we'd like to keep it that way. With local media under siege, it's more important than ever for us to rally support behind funding our local journalism. You can help by participating in our "I Support" program, allowing us to keep offering readers access to our incisive coverage of local news, food and culture with no paywalls.
Make a one-time donation today for as little as $1.