The Best Food and Drink Happenings This Weekend

Look for the big blue bear to find some pho poutine. Courtesy of Pho King Rapidos
If you're not stuck in a tryptophan stupor all weekend, get up and get out: Denver restaurants have planned some special food and drink events.

And the action will continue into December; keep reading for more of what's on the culinary calendar.

Friday, November 27
Two words: pho poutine. Get some from one of Denver's hottest new food trucks, Pho King Rapidos, at Factotum Brewhouse, 3845 Lipan Street, on Friday, November 27. You're probably hung over (and still full) from Thanksgiving (giving thanks for what we still have is going to be even more meaningful this year, but we're sure as hell going to eat our feelings and stuff our faces); what better hangover cure than a mound of French fries, flatiron steak, jack cheese and pho-spiced gravy? Pho King Rapidos has plenty of other fun dishes on the menu, too, but who are you kidding? Order online to make the visit go smoother; show up starting at 1 p.m. for the goods.

Saturday, November 28
It's two days post-Thanksgiving: Are you sick of leftovers yet? The good stuff — mashed potatoes and gravy, cranberry sauce, stuffing, and pies — are gone, leaving dried-out turkey breast fit only for mayo-heavy sandwiches. The antidote? Seafood from Jax Fish House, which you can pick up at all Post Brewing Co. locations on Saturday, November 28, between 2 and 4 p.m. You can nab lobster BLT kits, New England clam chowdah and tangy Caesar salad along with Post Brewing Crowlers, bottles of chardonnay starting at just $16, and $30 "big ol' cans of booze" — coin margs, Moscow Mules and whiskey Palmers — that (technically) serve five. Pre-order through the Post's page on Tock before 8 p.m. on Friday, November 27.

Here's hoping the usual Black Friday shopping shenanigans die a quick and ignominious death this year when consumers around the country carefully consider COVID's impact on local businesses as well as their desire to mitigate the spread of the virus and realize that standing in line at the stroke of midnight for a $50 TV isn't an ethically sound choice. (That probably isn't going to happen.) But you know better! You support local businesses, and from your moral high ground, you happily mask up and venture to the first weekend of Denver's Holiday Bazaar on Saturday, November 28. There you'll find dozens of local vendors selling crafts, gifts and food items from coffee and crackers to cupcakes and candies. Entry to the market (at Belleview Station dog park, 6785 East Chenango Avenue) is $5 for an hour of shopping time. The Jingle Bell Bar is open to warm you up with hot, boozy drinks while you shop. The market is open 1 to 4 p.m. Saturdays and Sundays through December 20; get tickets on Eventbrite.

Normally, we would have binged on food films in Boulder last month, but nothing is normal about 2020. The Flatirons Food Film Festival has gone entirely virtual and has been pushed back to January 28, 2021. But tickets for the annual fest are on sale now, and you can take advantage of early-bird pricing on an all-access pass (normally $100, currently $90; tickets to individual screenings will go on sale soon for $12.). That includes access to all thirteen films on the program, plus live-streamed discussions and Q&As. And if you purchase an early-bird pass, you'll be entered into a series of drawings starting December 16 for a gift box that includes goods from Bookcliff Winery, Savory Spice Shop, Highland Honey, Dry Land Distillers and other local food and beverage producers (easiest holiday shopping ever). Visit the fest's website to make your purchase; two-, four- and eight-ticket packs are also available at a discount.

The Block's newest bourbon has spent two years in barrels.
The Block Distilling Co.
Friday, December 4
Kick off the weekend with a kick at the Block Distilling Co., 2990 Larimer Street, which is launching its second batch of bourbon on Friday, December 4, alongside a brunch from the team at Work & Class and Super Mega Bien. Pre-order on the Block's website before 7 p.m. on Wednesday, December 2, and you can choose a bottle of bourbon (either the adorable 375-mL or the full-sized 750-mL), plus entrees like fried chicken and waffles with whiskey maple syrup; shrimp ceviche; cheddar cheese lamb sausage with green chile scrambled eggs; a vegetarian breakfast burrito; and more. Depending on your selections, you'll pony up $50 to $91 dollars. Seatings are available at 10:30 a.m. and 12:30 p.m. Friday, December 4, through Sunday, December 6.

Based on that reindeer's expression, we're not sure he likes beer.
Breckenridge Brewery
Saturday, December 5
We're not generally big fans of giving away your personal information to a sweepstakes sponsor, but when the prize is a real, live reindeer delivering beer to your house and the contest benefits nonprofit organization Food Bank of the Rockies, we're all in. Denver residents who enter by Wednesday, December 2, on Breckenridge Brewery's website will be in the running to receive a special "reinbeer" delivery of a mini-keg of Breck's Christmas Ale on December 5 or 6. And for every entry, the brewery is donating one meal to Food Bank of the Rockies. Residents of Cascade, Colorado — home of Colorado's stuck-in-time North Pole amusement park — are also eligible to enter and almost certainly have a greater chance at winning.

Barquentine Brewing and Edgewater Public Market are hosting a holiday toy drive for Denver kids in need on Saturday, December 5. Pull up in the parking lot at 5505 West 20th Avenue in Edgewater between 1 and 6 p.m. and drop off a new, unwrapped toy (suggested value $20 to $30) for children up to age eighteen. The drive is designed to capture fun stuff, so no size-specific gifts (only Scrooges give packs of new underwear, anyway); see the event website for gift suggestions. While you're there, nab a table outside and order a brew or two from Barquentine; the brewery is donating 20 percent of all its sales during the event to the Denver Dream Center, which is helping distribute the toys. 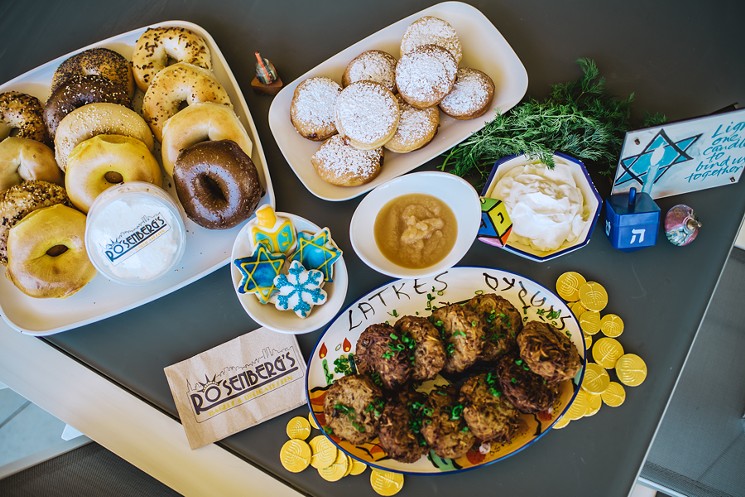 Rosenberg's Hanukkah spread is sure to light up your winter nights.
From the Hip Photo
Thursday, December 10
Hanukkah begins Thursday, December 10, and because the only sure things this year have been COVID, taxes and political incompetence, we urge you to plan ahead by pre-ordering the carbiest, sugariest, most comforting Hanukkah sweets you can find, immediately. Visit the Staenberg-Loup Jewish Community Center's (JCC) website now to place your order for a pint of Bob's Babka, an olive oil ice cream with chunks of babka (a sweet, eggy, yeasted holiday bread) swirled in. High Point Creamery is producing the pints, which go for $10 each (includes tax and credit card fees) and will be available for pickup on December 10. Walk-up sales won't be offered this year, so make sure you get your order in promptly. Both locations of Olive & Finch (1552 East 17th Avenue and 3390 East First Avenue) are offering Hanukkah cookie kits for the family that come with a dozen sugar cookies, five different colored frostings, decorations and a tote bag. Order your kit on the cafe's website (mention "JCC Denver" at checkout, and 10 percent will be donated to the JCC), and pick up your haul between Tuesday, December 8, and Thursday, December 10.

Know of an event or activity that belongs here? Send information to [email protected]
KEEP WESTWORD FREE... Since we started Westword, it has been defined as the free, independent voice of Denver, and we'd like to keep it that way. With local media under siege, it's more important than ever for us to rally support behind funding our local journalism. You can help by participating in our "I Support" program, allowing us to keep offering readers access to our incisive coverage of local news, food and culture with no paywalls.
Make a one-time donation today for as little as $1.