Our Mutual Friend is one of several breweries that require vaccine cards for entry. Our Mutual Friend Brewing
While 2020 was one of the shittiest years in recent memory for most people, 2021 was more about picking up the pieces — both the bad and good ones — and moving forward in some form or another.

For Colorado's craft beer scene, moving forward meant different things for different people, and while there were plenty of brewery and beer bar closures as well as other kinds of heartbreak, there were also plenty of positive developments — a surprising number, in fact — that kept people coming back for more.

And while issues related to, or stemming from, the coronavirus pandemic still hold the biggest sway over what is happening in craft brewing (and in every industry), many of 2021's stories are simply about the ways things grow or change in any era for any number of reasons. Ups and downs, openings and closings, two steps forward and one step back.

Here are the ten biggest craft beer stories of 2021:

Living with pandemic realities
From the staffing shortages that have affected just about every industry to ever-evolving COVID and mask protocols to supply-chain issues, the new normal for service-industry businesses is that nothing is normal. And nothing is easy. But as we near the two-year mark for the pandemic, Colorado's small breweries and festival organizers continue to adjust — as they always have — to sudden shifts in how they have to do business, whether it's scrambling to find cans to sell beer to go, rescheduling and/or having to cancel events (like the WeldWerks Invitational and many others) or training employees in how to handle vaccine requirements, abusive customers and their own mental health. What will the future bring? That's impossible to know, but uncertainty has become a business model.

Woods Boss Brewing opened a concert venue called The Lodge.
Joe Hoffman
Pandemic silver linings
Things didn't look good for craft brewers last year, but through a combination of government assistance, flexible landlords and creative pivots, many of them survived, and a decent number have even gained strength by using the pandemic as an opportunity to buy or rent new buildings, as Cerebral and New Image did, or add new space, like Woods Boss, or otherwise change the way they do business. For instance, dozens of breweries have added small canning lines, expanded their patios and upgraded their back-end systems and online shops. A few have even bought other breweries in order to increase their reach. No one would want to relive the cloudy past couple of years, but a stronger Colorado beer industry could be a silver lining.

Peculier Ales opened its second location in November in Fort Collins.
Peculier Ales
If one is good, two is better
The year got off to a fast start, with beer makers opening second brewery locations or taprooms, and that trend only picked up speed as 2021 progressed. Paradox Brewing, Peculier Ales, Black Forest Brewing, Holidaily Brewing, Broken Compass and Westbound & Down were among those to add new storefronts, while Denver Beer Co., Prost and Odell Brewing each opened their third locations. Ratio Beerworks, meanwhile, is striving to open its second taphouse in January or February. And there are many more to come: You can expect to see some double dipping in 2022 from Left Hand Brewing, Cerebral Brewing, 4 Noses Brewing, FlyteCo Brewing, Zuni Street Brewing, Gilded Goat Brewing and WeldWerks among others that are in the planning stages but haven't yet been announced. While packaging has become more important to small breweries in pandemic times, second locations are even more important.

Odd 13
4 Noses buys Odd13 Brewing
After weeks of speculation and rumor, Odd13 Brewing finally announced in October that it had been bought by another mid-sized Colorado craft brewery. Broomfield's 4 Noses Brewing was the winning suitor, and the company is now building out a production facility (and taproom) in north Denver where it will be able to brew and can beer for both breweries — and keeping both breweries alive is the goal, 4 Noses founder Tommy Bibliowicz told Westword at the time. That's great news for fans of Odd13, since its beers will continue to pour from taps and fill up liquor-store shelves. It's also a happier ending for fans of independent craft breweries in general, who like to see their favorite places remain scrappy and free.

Odell Brewing added a kitchen to its second Denver taproom.
Odell Brewing
Go ahead and eat. Eat!
Breweries bought into the food business in a big way in 2021, as several major beer makers opened their own in-house restaurants and eateries. These include Odell Brewing, which runs a pizzeria in its newest Denver location; Denver Beer Co., which opened a kitchen at one location and started a food truck at another; and Prost Brewing, which added a kitchen to its original location in Denver and opened a taproom and restaurant in Highlands Ranch. TRVE Brewing brought in Music City Hot Chicken, while WeldWerks made plans to add a kitchen to its brewery in Greeley, and Left Hand announced plans to open a taproom and restaurant in Denver. The trend will continue in 2022 as both Raíces Brewing and FlyteCo dive deeper into the culinary world with their own kitchens. Others are likely to follow.

Bell's Brewery
Consolidation
Big companies of all kinds have been rolling up craft breweries across the country, and the pace of acquisitions picked up in 2021 — with some serious Colorado connections. In November, Japanese beverage giant Kirin purchased Michigan’s famed Bell’s Brewery and merged it with Fort Collins-based New Belgium, which Kirin’s Lion division bought in 2019. The move combines two of this country’s most storied craft beer producers. Meanwhile, Tilray, the Canadian marijuana company that bought Georgia’s Sweetwater Brewing in 2020, opened a major new production facility, taproom and restaurant in Fort Collins, along with a satellite taproom at DIA. In December, Tilray also bought Colorado’s Breckenridge Distillery for $102.9 million and then rolled up two San Diego County breweries, Green Flash and Alpine. These moves could portend a wave of consolidation in craft beer in 2022.

The thirty participants in the BA's inaugural mentorship class.
Brewers Association
A focus on diversity
Craft beer is still overwhelmingly weighted toward the white and male, but women, BIPOC and people who identify as LGBTQ+ are gaining ground — and just as important, perhaps, gaining a higher profile. Some local examples include Raíces Brewing, which held its second Suave Fest, highlighting Latino-owned breweries; Goldspot Brewing, which hosted its first Big Queer Beerfest and has embraced the LGBTQ+ community with weekly Fam Friday events; newer breweries like Wah Gwaan and Jade Mountain, which have reached across racial and cultural boundaries to attract customers and employees of varied backgrounds; and the promotion of several Latino or Hispanic brewers to top jobs in Colorado. In addition, three breweries — WeldWerks, AC Golden and Station 26 — helped create college scholarships to expand diversity within the high-level brewing programs at the University of Northern Colorado, Colorado State University and Regis University. And finally, the Brewers Association graduated its first class of mentees in a new, twelve-week virtual program that aims to increase diversity and inclusion within the industry.

Staff from three breweries celebrate their completion of the Blue Bench training program.
Cellar West Artisan Beer
Sexual-harassment fallout
Of course, it wasn't all good. In May, a series of Instagram posts detailing hundreds of allegations of sexual harassment, sexism and sexual assault in the beer and brewing business nationwide went viral, opening eyes for some, but underlining longtime realities for many others. Colorado's breweries only made a passing appearance in these posts, but there's no doubt that harassment in many forms happens here, just as it happens everywhere. Afterward, a number of industry-wide measures were taken to try to address some of the problems. In Colorado, one of the positive outcomes was that some breweries have taken it upon themselves to create employee and customer codes of conduct or to participate in safe space training programs — in particular, through the Blue Bench nonprofit group — to help give employees the tools to deal with a wide range of inappropriate behavior while on the job.

Dry Dock Brewing
Ball Manufacturing move shocks brewing industry
Just a year after it took over the high-profile naming rights to the former Pepsi Center, Broomfield-based Ball Manufacturing turned around and poked one of Colorado's most-loved industries right in the eye. The world's largest aluminum can maker notified dozens, if not hundreds, of breweries nationwide in November that minimum limits on can orders will rise five-fold — something most small and medium-sized breweries can't afford or don't need. The move, which Ball says is a result of a massive capacity shortage, comes at a time when craft brewers need those cans more than ever, as canning and selling beer to go has provided a lifeline for their businesses during repeated pandemic-related lockdowns and taproom closures. The change will result in much higher prices for breweries, which will then be passed on to consumers. It could also limit or eliminate some companies' abilities to produce popular small-batch beers, which could have a devastating effect on the entire industry. 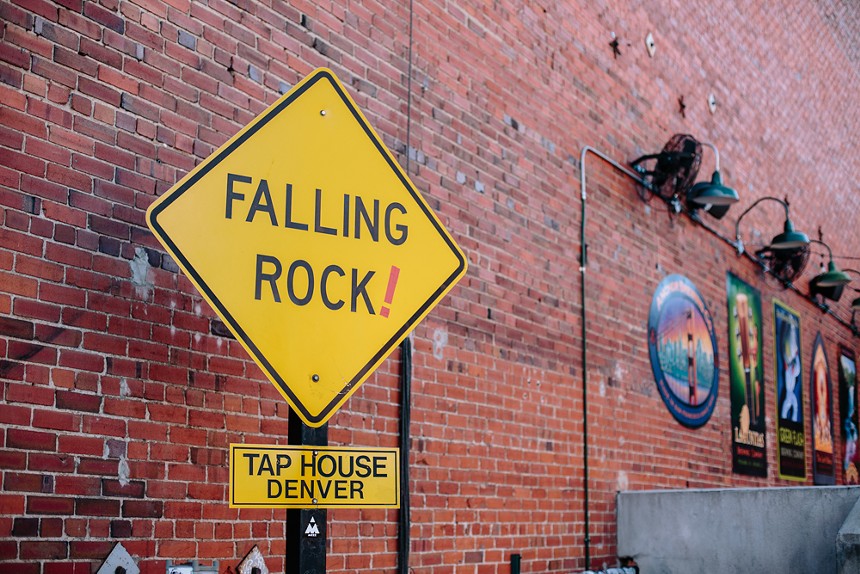 Falling Rock Taphouse
Falling Rock Tap House closes, ending an era
It was the first and last stop for beer lovers visiting Denver from around the world, and the heart and soul of the city’s craft beer scene since it opened in 1997. It's hard to overstate how important the Falling Rock Tap House — and its 85 handles of "no crap on tap" — was to the development of craft beer culture in Denver. So when it closed in June, Falling Rock left behind a hole that won't be filled. But times have changed, and beer culture has changed along with them. People no longer need a single place downtown where they can go to learn about and try different kinds of beers from different breweries — not when they can do the same thing at any number of beer makers in their own neighborhood. In some ways, that's a good thing; it means that Falling Rock accomplished its goal of spreading the word about craft beer. But the city, even with all of its vibrancy, is also poorer without this beating heart and soul at the center.
KEEP WESTWORD FREE... Since we started Westword, it has been defined as the free, independent voice of Denver, and we'd like to keep it that way. With local media under siege, it's more important than ever for us to rally support behind funding our local journalism. You can help by participating in our "I Support" program, allowing us to keep offering readers access to our incisive coverage of local news, food and culture with no paywalls.
Make a one-time donation today for as little as $1.