Chef Ian Kleinman in front of his soon-to-open Inventing Room Dessert Shop in West Highland. Mark Antonation
Those who have followed chef Ian Kleinman's career — from his molecular gastronomy days at O's Steak & Seafood ten years ago, through his magical pop-up dinners with hushDenver at the beginning of this decade, to the launch of the Inventing Room in the Ballpark neighborhood two years ago — will be thrilled to know that this wizard of frozen desserts will debut version 2.0 of his liquid-nitrogen ice cream shop and dessert bar in a new neighborhood on Sunday, October 29.

Kleinman found a new home for his Wonka-esque workshop on the ground floor of a new mixed-use development at 4431 West 29th Avenue, in the heart of West Highland, earlier this year and has been working alongside his wife, Stacey, to build out the space for the past several months. Customers of the original will recognize the bright-blue interior, steampunk decor and found-object art that makes the Inventing Room unique, but the new location will have more space for customers and a bigger kitchen for Kleinman and his crew behind the counter. 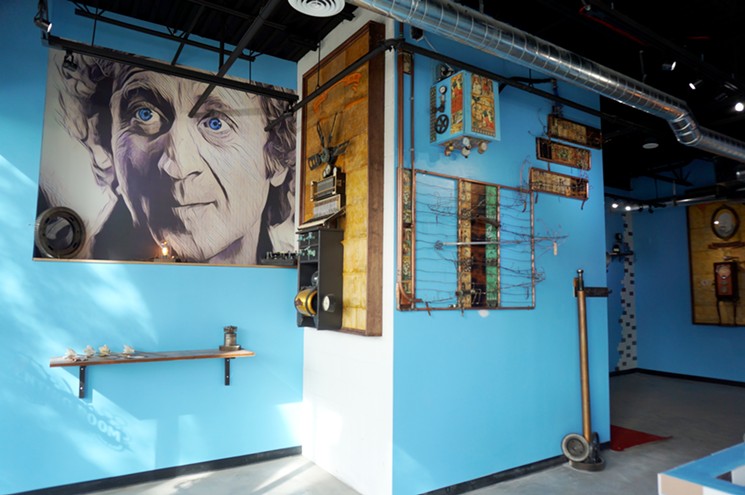 Gene Wilder is one of Kleinman's inspirations.
Mark Antonation
So expect an expanded menu of offerings (we're looking forward to the chef's take on Harry Potter's butterbeer) and new inventions like hard candies made in silicon molds of Kleinman's own design and chocolate shells in the shape of Rubik's Cubes. More magic awaits, but much of it is being kept under wraps so as not to spoil the surprise.

The original Inventing Room (which bears the same name as the catering company Kleinman founded nearly ten years ago) opened on Halloween in 2015 and lasted a year before the landlord canceled the lease (which was actually a sublease of a small nook attached to the restaurant space next door where Kleinman's father, Stephen, briefly ran Pop's Place), forcing the dessert bar to close. But the chef has kept busy with catering projects and expansion into the Middle East. Las year he launched an Inventing Room in Dubai and is expanding to Qatar and Bahrain soon.

What wonders will amaze Kleinman's new west-side neighbors? We can hardly wait until October 29 to find out.