Get Ready for More Wallet-Busting Beers in 2018 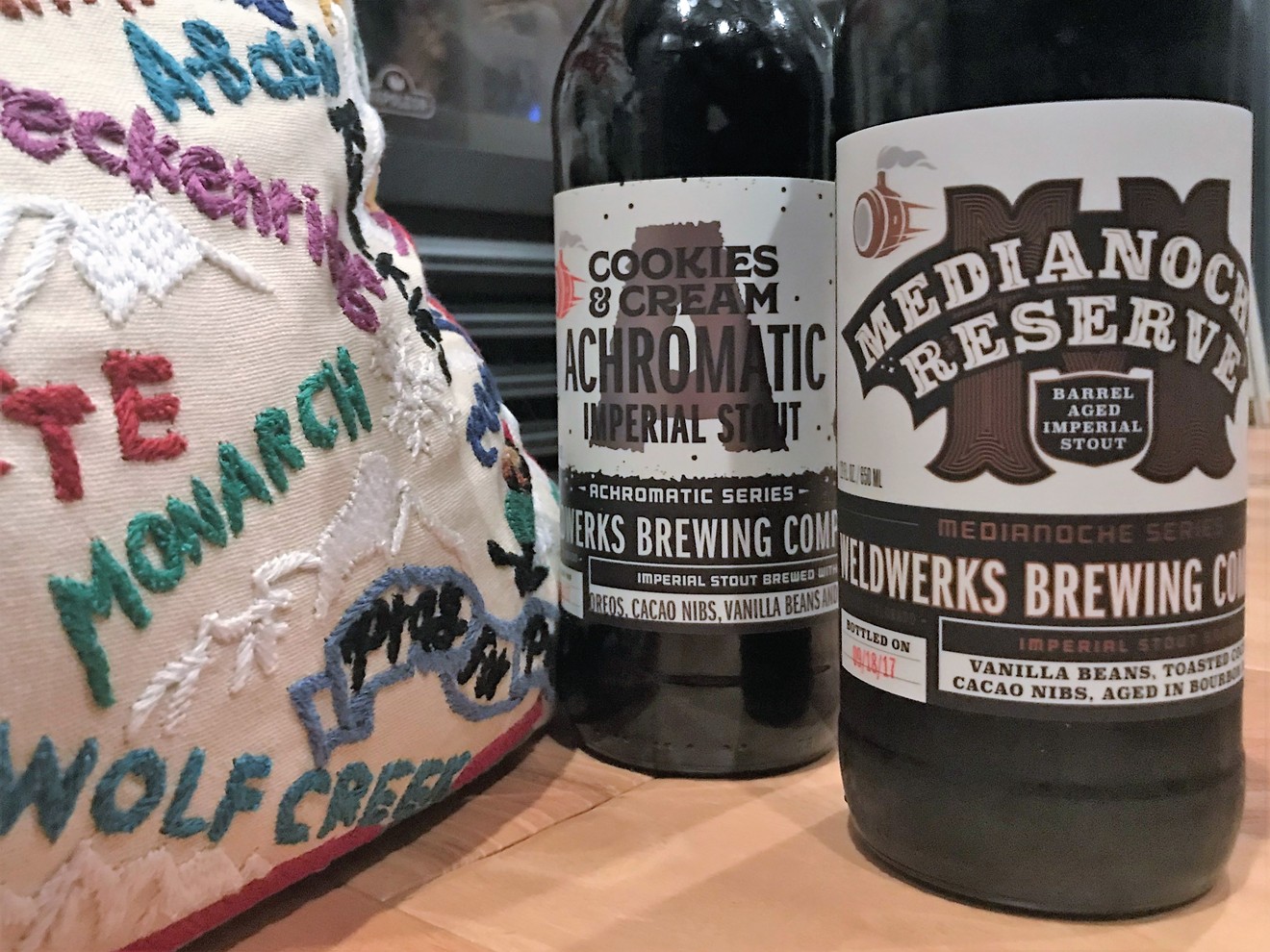 Weldwerks
If Black Friday, Small Business Saturday and Cyber Monday had you sweating it out on Can’t-Pay-the-Rent Tuesday, then you might want to turn away from this bit of news: In recent months, a few Colorado craft breweries have begun selling beers exceeding $30, $40 and even $50 a bottle. It’s part of a trend that may continue in the new year as breweries experiment with new techniques, processes and ingredients — and beer lovers continue to clamor for the best, the rarest and the newest brews they can find.

The most recent budget-busting beer is New Belgium Brewing's La Folie Grand Reserve: Geisha Sour Ale. Geisha blends the Fort Collins brewery’s groundbreaking La Folie sour ale with Panama Geisha coffee, which, at $60 to $80 per pound or more, is considered by many people to be the best, and thus the most expensive, coffee in the world. The beer retails for upwards of $48 for each boxed 750-ml bottle.

This is the most expensive beer that New Belgium has ever made — but as New Belgium specialty-brand manager Andrew Emerton puts it, it's “so very worth it.” At least to some people. To others, many of whom have debated the prices in online forums, it’s just silly. After all, even the most expensive beers these days, barrel-aged stouts and sours, usually top out at around $1 to $1.15 per ounce. For example, Avery Brewing's Uncle Jacob's Imperial Stout (and its other high-alcohol, high-end beers) sells for $12.99 per twelve-ounce bottle. 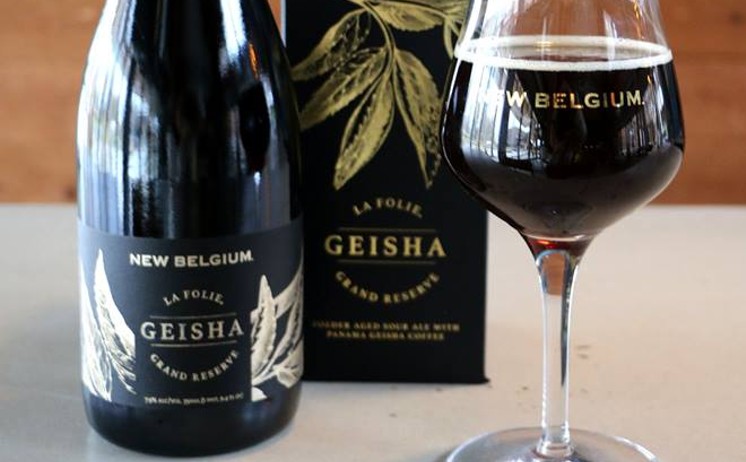 Geisha is blended with $60-per-pound coffee beans.
New Belgium Beer
As a result of the clamor, Emerton got online in early November to explain New Belgium’s reasoning and to “demystify” the beer. “As I'm sure you've noticed over the years, we're not a brewery that puts out gimmicky priced beers. We're pretty modest and fair with our specialty beer pricing,” he began, before launching into a story about how New Belgium came across Hacienda la Esmeralda, the Panamanian coffee farm that grows Geisha beans.

“This farm is still recognized as one of the best growers in the world, and their Geisha is not only the original Geisha, but it's literally the best coffee bean in the world,” he continued. “We thought it would be super cool to use our vendor connection and resources to bring you a beer featuring an ingredient you'll likely never get to try again in your life. In order to do that, we took some massive risks and massive precautions to bottle, what I'd say, is our most impressive sour we've ever released. I assure you, we're not making much money on this.

“I won't speculate on other brewery's costs,” he concluded, “but if you're looking to call BS on somebody's pricing, it's not ours and it never has been ours. We truly truly did this for our own adventure, but more importantly for the craft beer drinker. I hope you dig the beer.”

Weldwerks
That last bit about BS was a reference to the sometimes vitriolic discussion of another beer that hit the market recently: the $55 Vanilla Medianoche, a barrel-aged imperial stout from Greeley’s Weldworks Brewing. Medianoche, already intensely popular, achieved a new level of hype after winning gold at the Great American Beer Festival. Weldwerks owner Neil Fisher provided the following explanation for the price tag back in October.

We understand this is an extremely high price to pay for a single bottle of beer and is likely well beyond the budget of many of our customers. If that is the case for you, we encourage you to skip this release. We brew a multitude of styles across a wide range of prices, so while we know that not every beer we produce will cater to our entire customer base, we take pride in the fact that we usually have something for everyone.

But our brewing philosophy has always been to produce the beers we want to make (and drink), regardless of cost, rather than producing beers that fit a specific price point. In this case, it meant adding incredibly expensive vanilla beans to an already costly beer, which is why the price for Vanilla Medianoche is so high. Could we have used less vanilla or aged the beer a shorter amount of time to produce a more affordable beer? Absolutely. But we do not believe we could have produced a beer of this quality, probably the best beer we have made, without the time and ingredients used in Vanilla Medianoche.

Additionally, we have heard a lot of comments recently regarding expectations for how we should accommodate our "local" customers. We are incredibly grateful for the amazing support we have received from our local Greeley community, but we know that our loyal customer base extends well beyond Greeley city limits. So we consider "locals" as anyone willing to invest in or support our community. That might mean spending money here at WeldWerks or at other local businesses, supporting initiatives that help the community, donating to local nonprofit organizations, or even just spending time in Greeley. Those who engage in our local Weld County (get it, "WeldWerks") community are the people that we consider local, regardless of where they live.

To that end, we have decided to donate $10 from every ticket for Vanilla Medianoche to the Weld Food Bank. In 2017, the Weld Food Bank donated nearly 14 million pounds of food to those in need, and we are proud to support WFB to help them continue to serve our community.

Casey Brewing & Blending
The "incredibly expensive" vanilla beans that Fisher cited have driven up the cost of other stouts made with vanilla beans, but those pods and the Geisha coffee beans aren't the only expensive ingredients out there.

One of the reasons, says Troy Casey, who owns Casey Brewing in Glenwood Springs, is the cost of buying carefully grown, locally sourced fruit from Colorado suppliers. "We spend a lot of money on fruit," like apricots, peaches, plums and cherries, he points out. "We buy it for more than it would be at Whole Foods because we want to work with local growers. We know the quality is better, our purchase is making a difference in someone else's life, and the consumer gets a better product."

Most of his customers are understanding — and if they are sour-beer fans, then they're used to paying a premium for their favorite beers (and standing in line to get them). Since Casey is only open for tours and tastings, most customers know what they're getting into. "But some people are shocked when they first come in," he says. "I can justify the pricing we have all day long. But to someone who is not used to it, a $30 bottle of beer is pricey."

It helps, though, when those customers understand the quantity of fruit that is used and how long the beers spend aging in barrels — usually at least five months, which costs money as well.

"My favorite times this summer have been when I'm sitting there processing fruit, and John is giving them a tour, and someone asks, 'Is the owner here, or is Troy here?' I wave awkwardly, and they can't believe I'm here working. But what else would I be doing? This is a very labor-intensive process."