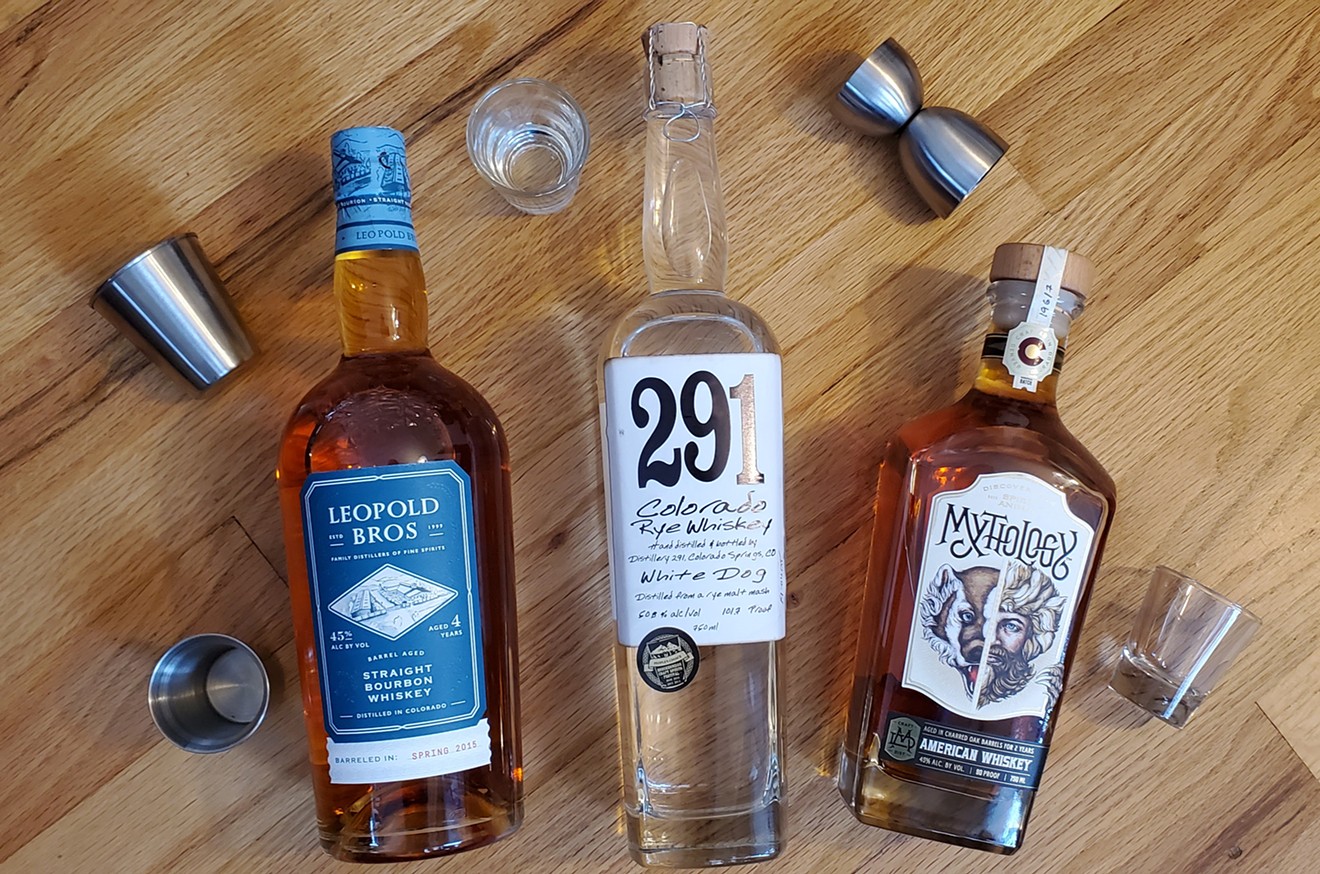 Stock your bar with a variety of Colorado whiskeys. Linnea Covington 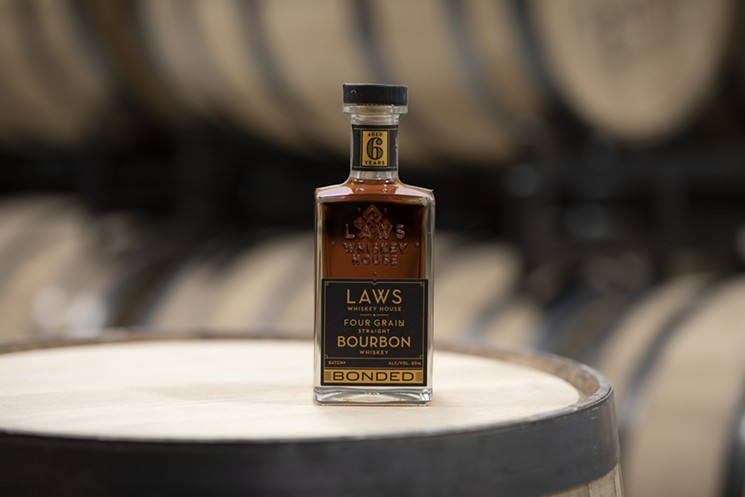 There are rigorous rules to follow before a distillery can call its bourbon bonded.
Courtesy Laws Whiskey House

1420 South Acoma Street
720-570-1420
Whether you're in the market for bourbon or a truly Colorado rye, the six-year-old Laws Whiskey House does nothing but whiskey — and does it well. The bourbon starts with locally-grown corn, heirloom wheat, rye and malted barley. Find bottles of the award-winning bourbon in straight, bonded and cask styles (see the distillery's website for the many details that make each style different). The rye whiskey is made with 100 percent San Luis Valley heirloom rye and is as spicy as it is smooth, no matter which version you're drinking.

While these six bottles make up the bulk of what Laws Whiskey House creates, there are specialty bottles of whiskey available from time to time as well. Another unique aspect of this whiskey is who makes it. Instead of a master distiller, there's a whole team of distillers working, tasting and making all decisions about what ends up in the bottle.

5285 Joliet Street
303-307-1515
Leopold Bros. does so many spirits well that it's no surprise its three whiskeys are also winners. Leopold Bros. Straight Bourbon is smooth and full of toasty chocolate notes and a bit of a fruity undertone. It has a touch of spice thanks to the two-row barley, malted right there, and the Abruzzi heritage rye that's combined with corn in the mash. Another favorite, the American Small Batch Whiskey, was first made in 2010 and is distilled and cut to the pre-Prohibition standard of 98 proof. Finally, there's the Maryland-Style Rye Whiskey, which the distillery consistently sells out of. In fact, it's sold out right now, and a new batch won't be ready until 2022 — so if you already have a bottle, make it last. Most of the grains used to make these brown spirits come from Colorado farms. Bottles start at around $35. 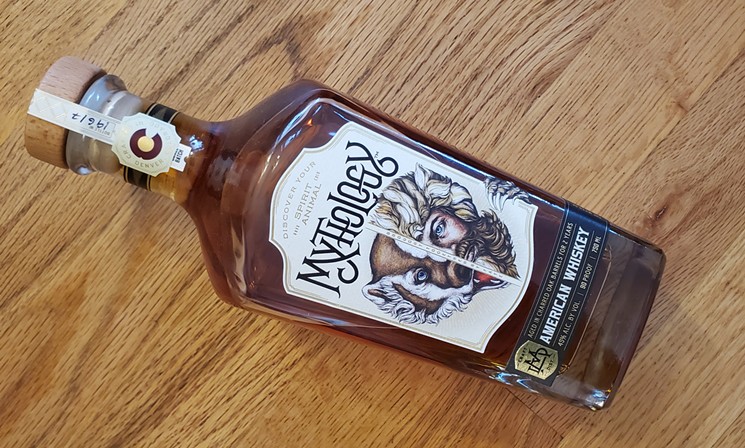 The American whiskey from Mythology Distillery in Sunnyside.
Linnea Covington

3622 Tejon Street
720-458-0501
The bottles from two-year-old Mythology Distillery sport some of the prettiest labels in the business, especially the Hell Bear American Whiskey, a blend of straight rye and four- and five-year aged bourbon. After distillation, the product is diluted and finished with Colorado snowmelt. It's spicy and fruity with a smooth vanilla overtone. There's also a rarer version aged in Dominio IV syrah wine barrels, which brings out a rich spice reminiscent of fall baking. This one is harder to find and not always available, but the standard version is available online for $60.

400 Corporate Circle, Golden
720-242-7219
Tiny State 38 Distilling is making bold bottles of straight Colorado wheat and straight Colorado rye whiskey, as well as a bourbon and Scottish-style peat-smoked whiskey. The first two are more expensive, around $100 each, and there's a limited supply. But for those looking to spend a little less, the bourbon, with notes of chocolate and coffee, runs $45 a bottle and has the added bonus of using ingredients sourced from local farmers. Don't overlook the peated option, either, especially if you like smoke in the glass. At $55 a bottle, this one tastes like it comes direct from Scotland, thanks to the coffee-smoked barley that makes up the mash and the notes of peat and cherry wood.
click to enlarge 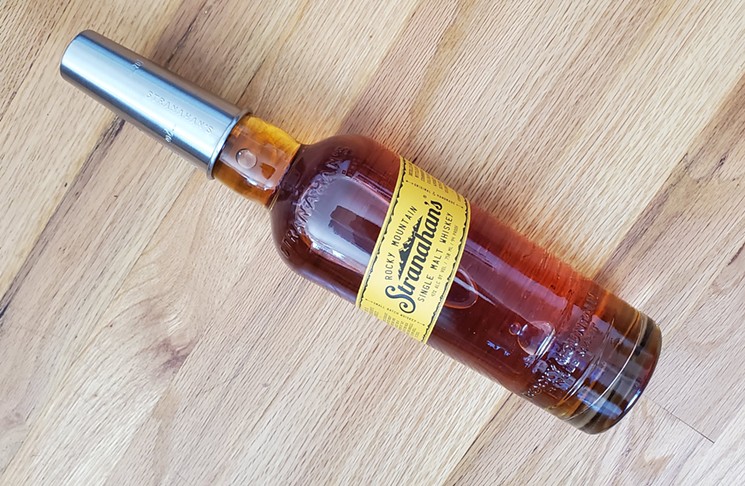 Stranahan's was the first legal distillery in Colorado when it opened in 2002.
Linnea Covington

200 South Kalamath Street
303-296-7440
Stranahan's started the local whiskey craze in Denver, and it's grown immensely since opening in 2002. Started by Jess Graber and George Stranahan, the distillery is now owned by Proximo Spirits. Stranahan's really only makes one whiskey, an American single malt. However, iterations are regularly released, such as the yearly Snowflake, which blends whiskeys aged in various barrels, methods and durations. There are also a single-barrel, a sherry cask and Diamond Peak, a small-batch whiskey blended from various barrels. Stranahan's is easy to find at liquor stores, but you'll have to stand in line (some do it for days) at the distillery for the annual release of Snowflake each winter.