Kook's Chili is a farmers' market hit. J.Mimna Photography
Coloradans cooked a lot of comfort food in 2020, and Jason “Kook '' Kuykendall was in the kitchen along with the rest of us. Now there’s a new chili in town (seven chilis, to be exact), and they’re selling out at farmers' markets every week. “We scaled up production 30% this week,” says Kuykendall. “And we’re just getting started.”

Although Kook’s Chili turned pro during the pandemic, Kuykendall has been perfecting the “Hades Hellfire” recipe for almost thirty years. “I had a Southern granny and started cooking with her when I was five,” he says. “I firmly believe that food is love.”

While he was feeding friends and family the addictively tasty Hellfire, the Oklahoman pursued a career in marketing and project management. Multiple layoffs soured him on the suit-and-tie life, and he began helping friend (and fellow Okie) Terry Walsh build his Rolling Smoke BBQ empire. “I found my calling,” Kuykendall
says. 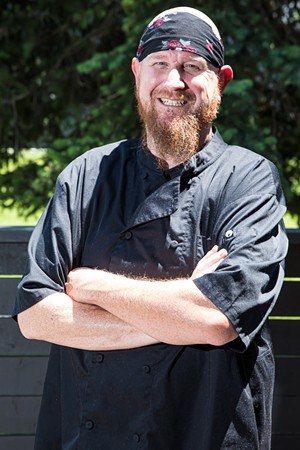 Jason “Kook '' Kuykendall took a risk during the pandemic, and it's paying off.
J.Mimna Photography
In 2017, Rolling Smoke was competing at the National Western Stock Show barbecue competition, and Walsh entered Hades Hellfire into the chili portion of the cook-off. “Our table was bare,” he laughs, “and all these other people had fancy decorated booths, outfits and music. I felt like we’d made a mistake...until other competitors kept coming for samples.” To Kuykendall’s surprise, his first-time, no-frills entry took first place.

By 2020, six years of restaurant work had taken a toll on his body and COVID-19 had (temporarily) almost completely shuttered the industry.

“I’d had two neck surgeries,” he says, "and although we [Rolling Smoke] had a great response to the chili from customers, there wasn't space or time to launch it as a separate business. Then the pandemic happened. I started offering chili to friends to make some money for Christmas gifts.” When the chilis proved extremely popular, Kuykendall decided to make the leap. "I thought, maybe it's finally time to do this — the universe said it can happen. I also wanted to create something for my family." (COVID delayed his wedding to fiancée Heather, and the couple will be married in October.)

The holiday hobby is now a full-fledged family food business, operating out of the Kitchen Network’s culinary commissary on Morrison Road. Brown sugar-kissed Hades Hellfire is joined by a slightly milder version (Kook’s #1), two unctuous and porky green chilis, a hot dog-worthy Texas Red and The Gobbler, a turkey-based variety of Kook’s #1. All of the chilis are dairy-, gluten- and soy-free, with vegetarian and vegan versions in the works. The most unusual chili is Street Pastor: slow-roasted pork, onion and charred pineapple combined with chiles for a taste of the street taco favorite in a bowl.

Kuykendall’s title is “Chief Chili Mad Scientist” and he’s building a crew. Friends and family members pitch in at the market tents, and future plans are to see the savory soups offered at local spots like Denver Central Market. After selling out the last four weeks at the Parker market, production has ramped up more than 150% this month.

Find Kook’s Chili for $8 per pint at the Metro Denver Farmers Markets at Southwest Plaza on Saturdays, Clement Park on Thursdays, and the Parker Farmers Market on Sundays.
KEEP WESTWORD FREE... Since we started Westword, it has been defined as the free, independent voice of Denver, and we'd like to keep it that way. With local media under siege, it's more important than ever for us to rally support behind funding our local journalism. You can help by participating in our "I Support" program, allowing us to keep offering readers access to our incisive coverage of local news, food and culture with no paywalls.
Make a one-time donation today for as little as $1.