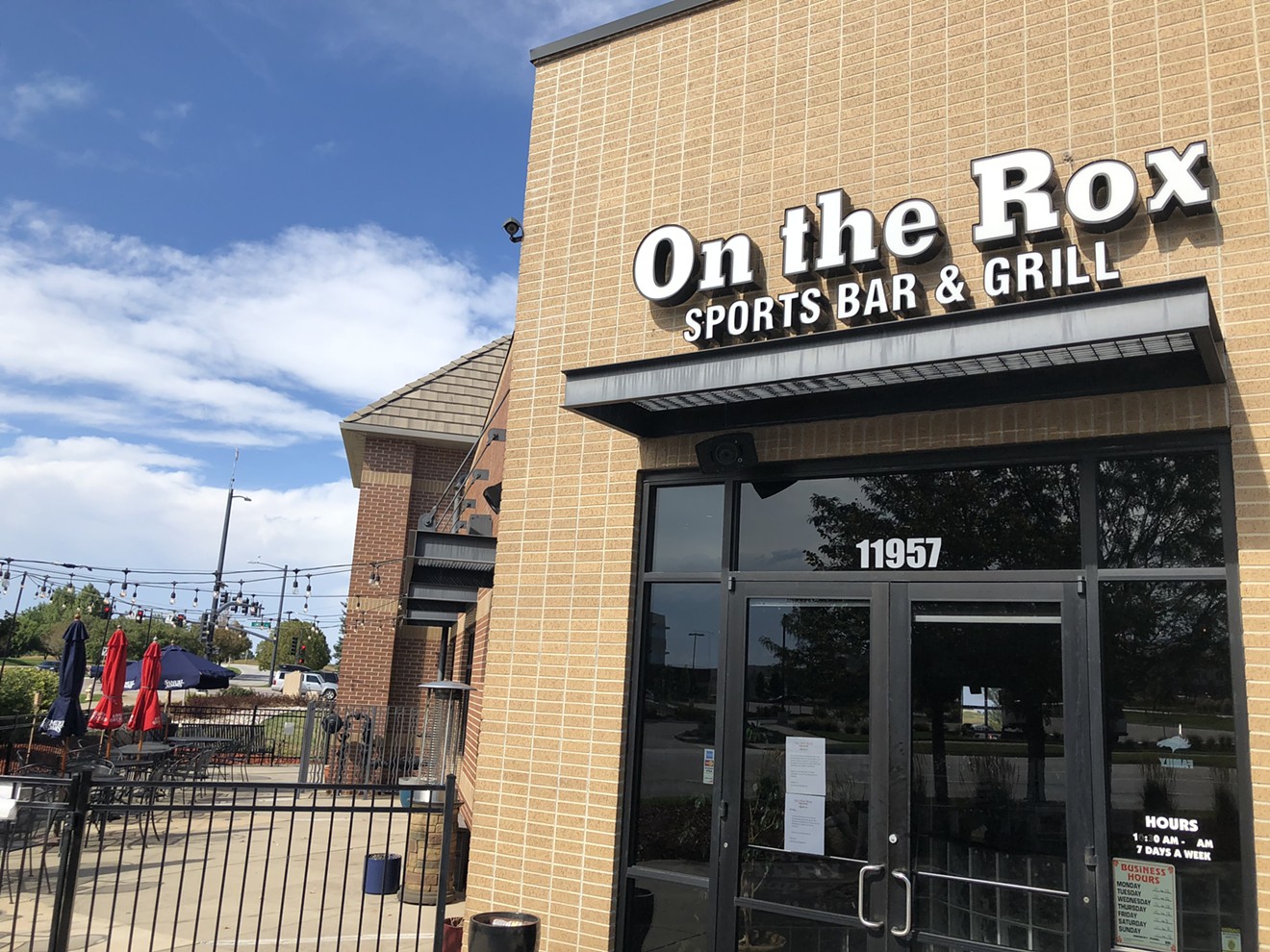 On the Rox Sports Bar and Grill is a neighborhood go-to for Broncos games and happy hour. Sarah McGill
Like many others who tend to stick within Denver city limits, I am not great with my suburban geography. When some friends and I decided to venture down south to On the Rox Sports Bar & Grill (which earns bonus points for the use of an x in "Rox"), we weren't quite sure if we were in Parker or Lone Tree. Although the address for the bar is 11957 Lioness Way in Parker, online maps showed that On the Rox could actually be in Lone Tree, or even someplace called Meridian (which I learned is an unincorporated part of Douglas County).

Despite my confusion over these vague municipal boundaries, I did grow up in the suburbs on the East Coast, and I've found that in confusing cul-de-sac mazes, landmarks are often the best way to describe things. That said, you can find On the Rox just a stone's throw from the Meridian Golf Course and the Wildlife Experience off Oswego Street and Lincoln Avenue.

That's where I met up with two friends to watch the Broncos game on a recent Sunday. We found a packed house comprising families with children from babies to high-schoolers, couples young and old, and single bros and women absorbed in the many NFL games playing on the 42 flat-screens (according to the bar's website) inside the joint. The Broncos game was playing on most of those, but it was clear that not everyone was in the house for the home team; my friends and I made a game of counting how many different jerseys we could see represented throughout the bar. We spotted two dudes wearing Seahawks jerseys, an older couple decked out in Chiefs gear, a family with a toddler in a Dallas Cowboys jersey and a mom sporting a Lions ensemble (the dad chose not to make his affiliation known through his wardrobe). The crowd was a true cross-section of the many transplants who have made metro Denver their home over the years.

On the Rox is housed in a large, freestanding restaurant that was previously a steakhouse. Our busy but kind server told us it's been under the same name for seven years, the last two and a half with current owners Kelly and Mark Drexler. Aside from the bustling main bar area full of booths and tables, there is a small stage, which was also filled with tables on this particular day, and a side room with garage doors that open onto a spacious, inviting patio along the side of the building. Because none of the 42 TVs were out there, the patio lay empty, despite the warm weather. So we hung with the crowd inside at a booth right in the thick of the action and grabbed some $2.75 Bud Lights, a Broncos game day special.

Everyone in the house got a free raffle ticket during the third quarter of the Broncos game, good for a chance to win Broncos jerseys, which were hung on display throughout the bar. There were also a smattering of signed, framed jerseys and pictures of famous Broncos players, as well as some golf-related memorabilia and a few beer signs, but otherwise, the red walls were unadorned.

During Broncos games, patrons at On the Rox get a chance to win a team jersey just for showing up.
Sarah McGill
We needed food to go with our beer, football and people-watching, and the Rox Sampler looked like a good way to get a variety of bar-food bites for research purposes. The sampler came with standard wings, potato skins and mozzarella sticks, but also included something unique: deep-fried green beans, a first for me, despite the number of fried bar foods I consume on a regular basis. The crispy green beans had a nice texture and flavor, and seemed like a particularly American invention, since very few people I know eat green beans unless there is a casserole or other unhealthy component involved.

The kitchen also offers "totchos" (tater tots covered with nacho fixin's), a delicacy I have enjoyed at a handful of other neighborhood bars around town, but we had all we could handle with the sampler and the frosty Bud Lights. The drink menu is filled with creative cocktail selections such as the "Call Me a Cab," a mix of cabernet, lemonade and cherry vodka, and the self-explanatory "Gummy Bear Martini" (made of...gummy bears in a martini), which I would have ordered, only we were there for Sunday football-watching and not a bachelorette party.

Beyond game-day specials, On the Rox is a good bet for happy hour, brunch and dancing. Bands or DJs get the dance floor going on some weeknights, while Saturday and Sunday brunch draws a crowd, with $3 Bloody Marys and $12 bottomless mimosas pouring until 2 p.m. The happy hour is one of the longest around; even on weekends, drink specials run from 3 to 9 p.m., which is why the bar calls it "Happy Half Day." Daily specials include $6 burgers on Mondays, $14 steak dinners on Tuesdays and half-price appetizers every Thursday. The bar is only open from 11 a.m. to midnight on weekdays, since the neighborhood isn't known for late-night revelry, but it stays open until 2 a.m. for the weekend party crowd.

My friends and I were fair-weather Broncos fans that day, exiting out into the fair weather of the suburbs before the jersey raffle. Beyond the parking lot, rows of homes on the horizon beyond a construction site could have been Parker or Lone Tree or Meridian. But if I can find my way back without getting lost in the sameness of it all, I'll definitely stop by On the Rox again.
KEEP WESTWORD FREE... Since we started Westword, it has been defined as the free, independent voice of Denver, and we'd like to keep it that way. With local media under siege, it's more important than ever for us to rally support behind funding our local journalism. You can help by participating in our "I Support" program, allowing us to keep offering readers access to our incisive coverage of local news, food and culture with no paywalls.
Make a one-time donation today for as little as $1.