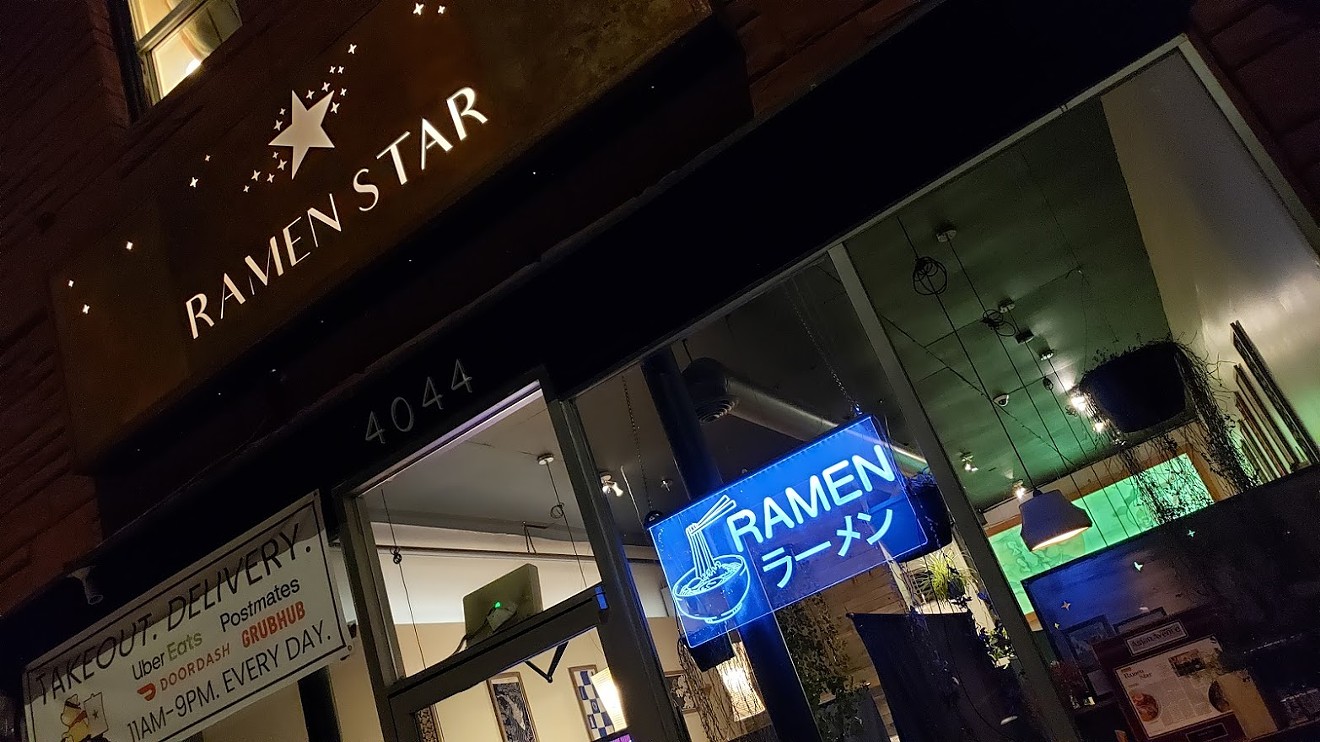 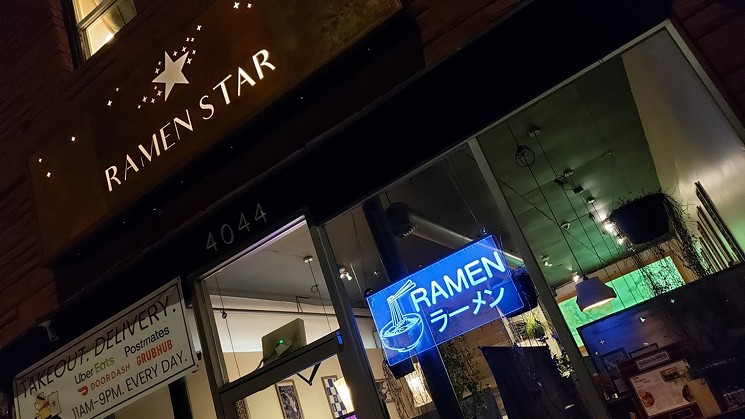 Gil Asakawa
I’m a fan of all flavors of Asian cuisine, and Denver has a great variety of eateries where you can celebrate the rest of Asian American Pacific Islander Heritage Month, then add to your regular rotation of restaurants to visit again after May is over. Each Asian community has its unique flavors and styles of cuisine. Sure, Japanese ramen, Thai and Chinese beef noodle soups and pho are all savory soups served in a bowl, but they're supremely satisfying in different ways, from porky to beefy. And while soy sauce might be the most common ingredient, five spice shines in some Chinese broths, and curry, of course, rules in Indian cuisine. There are also various ways to enjoy your meal, from slurping that soup to grilling your own Korean ’cue.

Now that pandemic restrictions have been loosened, it's the perfect time to support family-owned Asian restaurants — if you haven't already been doing so. Here are twelve of my favorites:

Aloy Thai
2720 Canyon Boulevard, Boulder
303-440-2903
aloythai.com
Although there’s now an Aloy Modern Thai at 2134 Larimer Street in Denver, the Boulder location is the original, and it's the one where I've eaten many a satisfying lunch. The food is traditional but presented as somehow modern and hip, with some dishes that you don't often find elsewhere, like the garlic-rich Slow Cooked Beef Noodle Soup.

Chez Thuy
2655 28th Street, Boulder
303-442-1700
chezthuy.com
Vietnamese restaurants fall into two main categories: noodle shops serving pho and maybe banh mi sandwiches, and eateries with huge, sprawling menus. Chez Thuy in Boulder added pho after it became popular with Americans, but this restaurant has a much longer history of cooking up a variety of Vietnamese dishes, and everything is incredibly great. That’s because owner Thuy Le knows her trade: She was the “T” in T-Wa Inn, the first Vietnamese restaurant to open in Denver, then moved north in 1992 and opened Chez Thuy, which is still going strong.

China Gourmet
3970 North Broadway, Boulder
303-440-0999
chinagourmetmenu.com
The Fan family has run this small, funky restaurant tucked away in a north Boulder strip mall (look for the sole Lucky’s supermarket left in the area) for years, with a standard-issue menu of American Chinese fare. But search the menu and you’ll find “Shanghai Specials” listed at the bottom. One of the Fan daughters calls them “authentic dishes” on her menu at the Longmont location, and they include Ants Climbing a Tree (no bugs, relax) and cold Spicy Beef Tendon.

Dae Gee
7570 Sheridan Boulevard, Arvada
720-540-0700
daegee.com
Restaurateur Joe Kim was fresh out of college when he took over his aunt’s Korean barbecue joint in a quiet Arvada strip mall and turned that single shop into a family-owned chain with locations on Broadway and Colorado Boulevard in Denver, one in Aurora (where a second is on the way), and even in Fort Collins. The food is tasty and consistent barbecue, spicy soups and bowls (he spells it "bee beem bhop"), banchan sides and newer additions such as dak nalgae — Korean fried chicken wings. 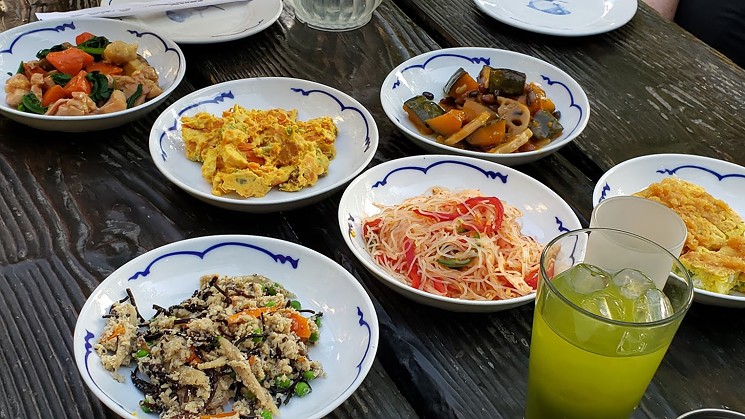 Domo dishes come with a variety of sides.
Gil Asakawa
Domo
1365 Osage Street
303-595-3666
domorestaurant.com
This is the only restaurant — never mind Japanese restaurant — anywhere that has an aikido dojo attached (owner/chef Gaku Homma is the sensei-in-residence) and a Japanese garden complete with koi pond. There’s even a Japanese country museum out back that shows off Homma's collection of objects from nineteenth-century Japanese farm life, as well as a spooky display of sake cups drained by kamikaze pilots about to take off on their final missions at the end of WWII. The food is as unique as the rustic decor in the dining room, with country-style dishes from Homma’s home town of Akita Prefecture. Sushi isn't presented on dainty small plates or gimmicky boats, but rather as a hearty meal, and the many hot pot dishes and grilled fare come with a variety of cool little side dishes. This place is very Japanese, so much so that visitors from Japan love to eat at Domo when they’re in Denver, because they can’t get this kind of food in Japan anymore — at least not in the big cities.

Izakaya Amu
1221 Spruce Street, Boulder
303-440-0807
izakayaamu.com
Izakaya Amu is a tiny, terrific izakaya with bar seating where you can watch your small dishes artfully prepared, as well as a couple of tatami-mat rooms past the kitchen for group dining. The menu is large, and everything is well prepared. No, Amu doesn't share a menu with Sushi Zanmai next door; that's a Boulder icon that even fed the emperor and empress of Japan when they traveled through Colorado in the 1990s. The restaurants do share ownership and a doorway so that staff can pass from one room to the other, but Amu is its own lovely world.

Lao Wang Noodle House
945 South Federal Boulevard, Unit D
303-975-2497
lwnoodlehouse.com
For years, I’ve loved the dumplings here, both the pot stickers and xiao long bao soup dumplings. I’ve always called them the best dumplings in the universe, and I haven’t found any that beat them. The Beef Noodle Soup is out of this world, too. The owners, Chung-Ming and Tse-Ming Wang, are sometimes cranky (“No, we closed! Go away!”), but their food speaks volumes for the little shop. One Vietnamese Restaurant in Westminster.
Gil Asakawa
One Vietnamese
8767 Sheridan Boulevard, Westminster
720-730-2019
onevietnameserestaurant.com
The pandemic made us seek out new places to try various dishes, including pho joints. Oanh and Thanh Do opened One Vietnamese (Oanh is pronounced “One”) in August 2019 in a strip mall along Sheridan Boulevard near the Boulder Turnpike. The pho is good, but the impressively large menu has other great choices — especially modernized fusion dishes like udon xao bo luc lac (tenderloin udon) and pan-Asian fare including killer basil fried rice. The noodles are the star at Ramen Star.
Gil Asakawa
Ramen Star
4044 Tejon Street
303-455-3787
ramenstar.com
Takashi Tamai has something that Denver's other standout ramen shops don’t: housemade ramen noodles that he makes every morning. Those noodles, along with Tamai's relentless pursuit of perfection in his tonkotsu-style special bowl, the Ramen Star, just earned him a Best of Denver 2021 award for Best Ramen, and it's well deserved.

Star Kitchen
2917 West Mississippi Avenue
303-936-0089
starkitchenco.com
Fans of dim sum are legion, and this large room at the unpretentious intersection of South Federal and Mississippi serves up about the best — and best selection — of the Chinese small plate dishes via tableside cart that you would ever want. Early on during the pandemic, when Asian restaurants suffered a precipitous drop in customers even before the shutdowns, Mayor Michael Hancock made a show of dining here to urge Denver residents to support local Asian businesses. 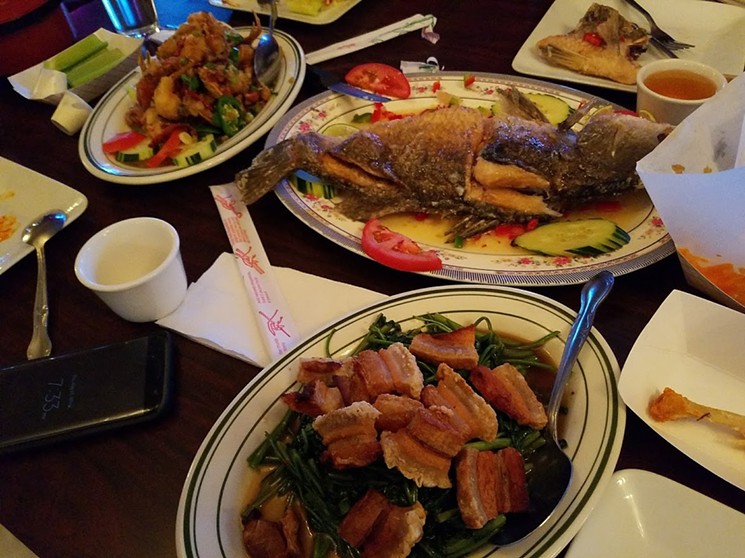 Yes, great Asian food ad Woody's Wings & Things.
Gil Asakawa
Woody’s Wings N Things
6817 Lowell Boulevard, Westminster
303-427-0302
woodyswings.eatintakeout.net
Woody's is one of our all-time favorites, both for its unlikely backstory and its excellent food. A Cambodian man bought into a Buffalo chicken wing franchise, and over the years started adding an impressive array of fabulous Cambodian, Thai, Lao and Vietnamese dishes to what became a huge photo album of a menu — with no prices listed. And yes, you can still order some damned fine chicken wings and even French fries on the side. 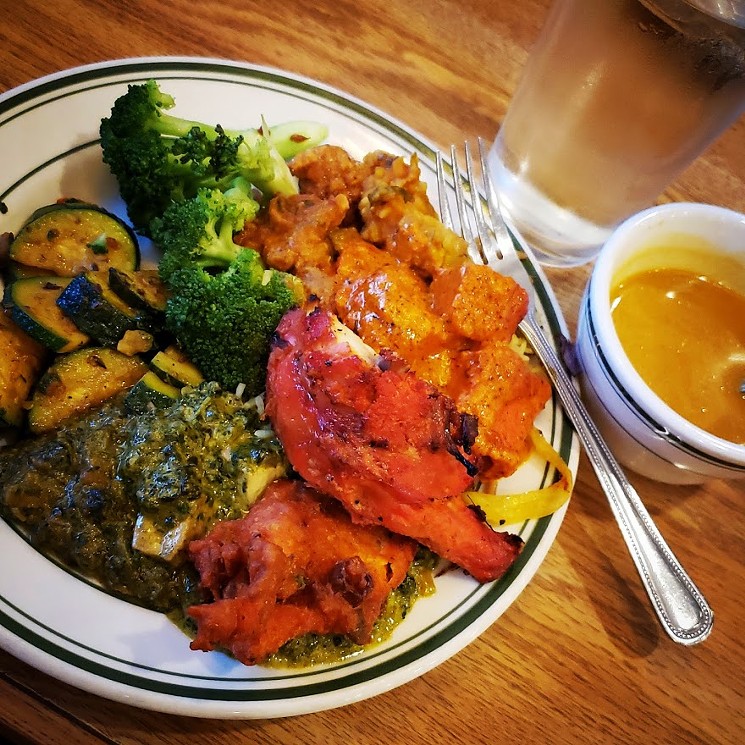 The buffet may be gone, but the individual dishes are great at Yak & Yeti.
Gil Asakawa
Yak & Yeti
7803 Ralston Road, Arvada
303-431-9000
theyakandyeti.com
Sadly, the era of Yak & Yeti buffets may be over, thanks to the pandemic. But any of the four locations of Yak & Yeti, which serve the restaurant's own microbrews, is still worth a visit (the Westminster restaurant is a few doors down from One Vietnamese). The Indian fare is authentic and delicious, even if you can’t sample items from a buffet. Our favorite is the Olde Town Arvada location, installed in a house built in 1864 that may be haunted by the ghost of one of its owners. This is also where the chain’s beers are brewed.

Since the rules are changing by the day, be sure to check with individual eateries for the latest before you go.