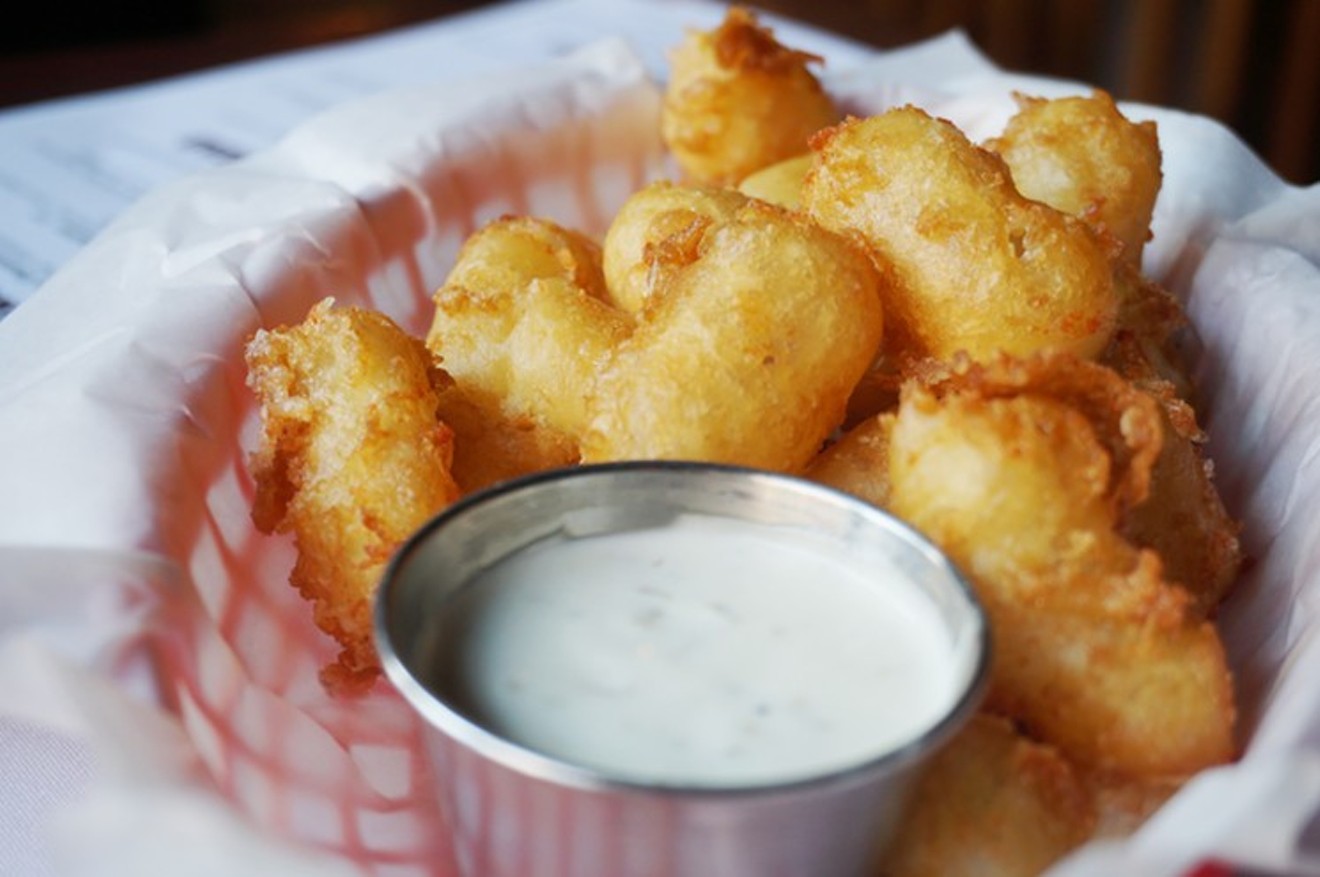 The money shot: cheese curds at Wally's. Mark Antonation
Neighborhood bars aren't the fanciest joints on the Denver dining scene, but you can count on many of them for delicious (often greasy) bar food to wash down with your favorite beer (preferably something cheap). Whether it's a neighborhood bar with a scratch kitchen and professional chef overseeing the menu or a hole in the wall with a toaster oven and a few Rocky Mountain pizzas or taquitos, local saloons make sure you've got something to munch on and soak up the alcohol. And some of these bar snacks rise to the level of truly good food.

In honor of those tasty treats and other traditional favorites, we've compiled a list of Denver's best bar bites. Some are unique to Colorado and some came from elsewhere in the country, just like the bars' denizens themselves. Don't look for these in trendy new eateries, but instead at your favorite boozer down the street. 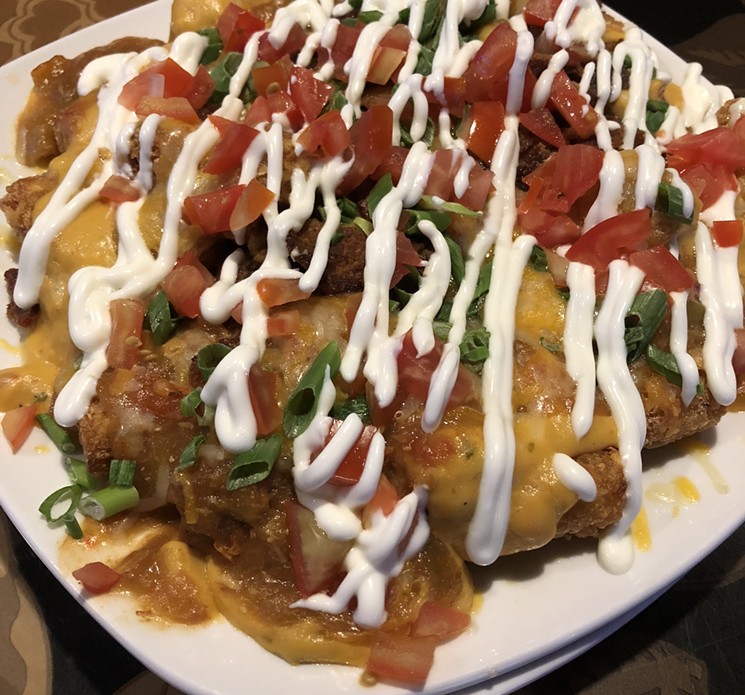 Wash Park's Sportsbook Bar and Grill serves up extra large orders of totchos (tater tot nachos).
Sarah McGill
Totchos
Tater tots and nacho toppings come together to create the delightful bar snack known as totchos. The origins of totchos are the subject of dispute; some claim they were invented along the U.S.-Mexico border, others assert that they come from Seattle or Portland. Tater tots themselves did get their start in Oregon as a way for the Ore-Ida potato company to use up potato scraps, so maybe that Portland totcho origin story has something to it. In Denver, totchos are on point, with fixin's like shredded or liquid cheese, salsa, green chile, beans, sour cream and all kinds of other piled-on variations. The Sportsbook Bar and Grill in Wash Park serves some massive piles of totchos, as does On the Rox Bar and Grill down in Parker, or Rocky Top Tavern up in Berkeley. They're great for hangovers, sharing with friends or just general enjoyment, Totchos hit the spot-chos.

Free popcorn is the best kind of popcorn.
Sarah McGill
Popcorn-Machine Popcorn
We get excited about free snacks, which is why we love a good neighborhood bar popcorn machine, where you can scoop your own bag or bowl of popcorn. Fortunately, several spots around town offer free popcorn for all. The Federal Bar and Grill in Jefferson Park has popcorn for the masses, as does the Bannock Street Garage in the Golden Triangle. If you're venturing out to the mountains, you can snag some popcorn along your way at the Morrison Holiday Bar. The popcorn machines at G'Ducks Bar in Aurora and the Monkey Bar in the Art District on Santa Fe get extra points for free popcorn toppings such as white cheddar, garlic salt, parmesan cheese, additional butter and lemon pepper.

There's nothing like a slopper. This one is from Fiddlesticks Bar and Grill in Lakewood.
Sarah McGill
Sloppers
Also known as Pueblo Sloppers, since their origin is in the working-class city two hours south of Denver, this bar bite is more of a bar meal, and a true Colorado original. There is some variation in the telling of precisely when and where the slopper came to be, but most attribute it to Gray's Coors Tavern. Denver's neighborhood bars do their own versions of this delicacy, which is basically just an open-faced double cheeseburger smothered in green chile and extra cheese, but tastes like so much more. Classic green chile versions are on the menu at the Backstreet Tavern and Grill in Aurora and Fiddlesticks Bar and Grill in Lakewood. Noonan's Sports Bar and Grill in Aurora offers its own twist, called a "Sloppy Carl," that allows customers to choose red or green chile. We're not sure who Carl is, but we'll bet he knows a thing or two about deliciously unhealthy bar food. 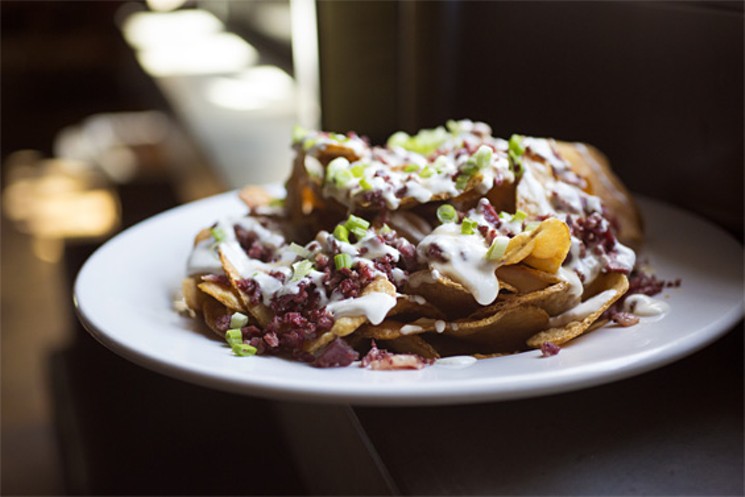 Irish nachos at the Abbey Tavern.
Danielle Lirette
Irish Nachos
Denver loves Irish bars, as well as the Irish bar snack that they don't actually make in Ireland: Irish nachos. These potato chip-based "nachos" are smothered with toppings such as corned beef, cheese, onions or chives, sour cream and bacon. Rumor has it that Irish nachos were first served at a bar in Texas; you can now find them at most of Colorado's neighborhood Irish bars. We recommend the ones at the Irish Rover and Dougherty's Restaurant and Pub in Baker, or the Fainting Goat just up Broadway or Clancy's Irish Pub in Wheat Ridge. A few enjoyable twists on the recipe: The Irish Snug version uses a base of waffle fries instead of the usual kettle chips, and zippy horseradish comes on the Irish nachos at the Abbey Tavern. Rocky Mountain oysters — also known as calf tenders.
Westword
Rocky Mountain Oysters
Some people find Rocky Mountain oysters a little off-putting, and they're not offered in many places outside of rodeo fairgrounds these days. In Denver, old saloons and touristy restaurants are just about the only places you'll find them, so you're guaranteed a little character with your calf tenders, as they're sometimes called. You can find fried bulls' balls at the Frontier Club in Aurora, the Stockyard Saloon, where they make them fresh for the cowboys at the National Western Stock Show, and Sweetwater Bar and Grill in Westminster. Wrigley's Chicago Bar and Grill in Golden has classic RMOs, but also makes a Chicago-themed version called "Cubbie Hot Nuts," covering them in green chile and cheese.

Fried Jalapeños
Bars all over the country have some sort of basic jalapeño popper, but Colorado bars deep-fry jalapeños to another level. The Dam Grille in southeast Denver serves huge, spicy, bacon-stuffed jalapeños with bite and crunch, while the Brutal Poodle offers "Holla Peña Lollipoppas," bacon-wrapped shrimp stuffed with cream cheese and jalapeños. The Poodle's rendition also comes with jam, for a truly decadent win. Snake Bites — fried jalapeños with cream cheese and bacon inside — also come with raspberry jam at the Lakewood Grill.

Mexican Hamburgers
The Mexican hamburger was invented in Denver and appears on menus all over town; you don't need a patent to figure out how to stick a hamburger patty and refried beans in a flour tortilla and top the package with green chile and possibly lettuce, tomato, cheese, sour cream, guacamole — or all of the above, depending on the chef's preference. Different versions can be found all over the metro area: Charlie Brown's Bar and Grill in Capitol Hill, the Lakewood Grill, Fat Boy's Bar and Grill in Aurora, Sweetwater Bar and Grill in Westminster, the Satire Lounge on East Colfax, and Shelby's Bar and Grill downtown, to name just a few. If you want to try the Shelby's version, you'd better do it soon: The property where this longtime bar stands has been sold.

Cheese curds are one of Denver's favorite Wisconsin imports. The ones at the Kentucky Inn in Wash Park are always a good idea.
Sarah McGill
Fried Cheese Curds
You don't have to travel to Wisconsin to try cheese curds. Countless Wisconsin natives have moved here, bringing their fondness for Packers and Badgers and cheese to our neighborhood bar scene. One of the best features of this Wisconsin invasion is the decadent fried cheese curd — basically a superior version of a mozzarella stick, with better-quality (cheddar) cheese and a crisper batter. Lots of Denver spots have them, such as Sportsbook Bar and Grill and the Kentucky Inn. This snack is also obligatory and cooked to perfection at Wisconsin-centric bars such as Roo Bar, Swanky's and Wally's Wisconsin Tavern.

Chicago Dogs
Another Midwestern influence that can be found at many Colorado neighborhood bars comes from Illinois, specifically Chicago. A number of spots here serve a Chicago dog, defined as a beef hot dog topped with onions, yellow mustard, tomatoes, tiny pickled peppers called "sport peppers," hot green relish, celery salt and a pickle spear for good measure. You'll find them at such unlikely spots as the Horseshoe Lounge, Wrigley's in Golden, Challengers in Aurora and, for an upscale, power-lunch version, Chopper's Sports Grill in Cherry Creek.

Snacks From a Vending Machine
When you're drinking and suddenly find yourself craving junk food, a pack of peanuts, some hot Cheetos or a candy bar can really fill the bill. That's where bar vending machines come in, and Denver has some fine ones. Tooey's Off Colfax in Capitol Hill, the Frontier Club in Aurora, and Badger's Pub in Baker all offer your basic sweet and salty snacks on the cheap. The legendary vending machine at Don's Club Tavern gets extra credit for stocking not just frozen cheeseburgers, burritos, ice cream sandwiches and chips, but a hodgepodge of random and useful items such as condoms, underwear and cigarettes. No matter what you're looking for, this magic machine comes up a winner.
KEEP WESTWORD FREE... Since we started Westword, it has been defined as the free, independent voice of Denver, and we'd like to keep it that way. With local media under siege, it's more important than ever for us to rally support behind funding our local journalism. You can help by participating in our "I Support" program, allowing us to keep offering readers access to our incisive coverage of local news, food and culture with no paywalls.
Make a one-time donation today for as little as $1.