Easter means beer in Denver. Danielle Lirette
Jesus's second-biggest party trick may have been turning water into wine, but Denver's definitely a beer town from Friday, March 30, to Sunday, April 1. Make like the Easter Bunny and hop on over to these five food and drink events.

Friday, March 30
Grandma's House, 1710 South Broadway, has established itself as a center of crafting and brewing in Denver; with frequent cross-stitch, sewing and knitting classes, the taproom is the second-best place in town (other than the saggy IKEA couch in your own living room) to tie one on while you're tying those artisan fly-fishing lures. On Friday, March 30, you won't even need to sign up for a class — just show up at 7 p.m., when the tables will be covered in paper and art supplies, so you can draw your filthiest, funniest cartoons. The only cost will be for the beer (and your dignity). Visit the Dirty Doodles Facebook page for details.

If you're curious about Collaboration Fest, but balk at the thought of the crowds, lines or ticket prices, treat yourself to a mini-fest at Finn's Manor on Friday, March 30. The bar and food-truck landing, 2927 Larimer Street, will be hosting a Collab Fest preview party starting at 8 p.m., with a very manageable three beer partnerships on tap throughout the evening. Ratio and Ska, Lone Tree and Cannonball Creek, and Great Divide and 4 Noses will be represented; see the event's Facebook page for more information about the beers. You'll feel the sense of accomplishment that comes from sampling all the offerings without that pesky alcohol poisoning. 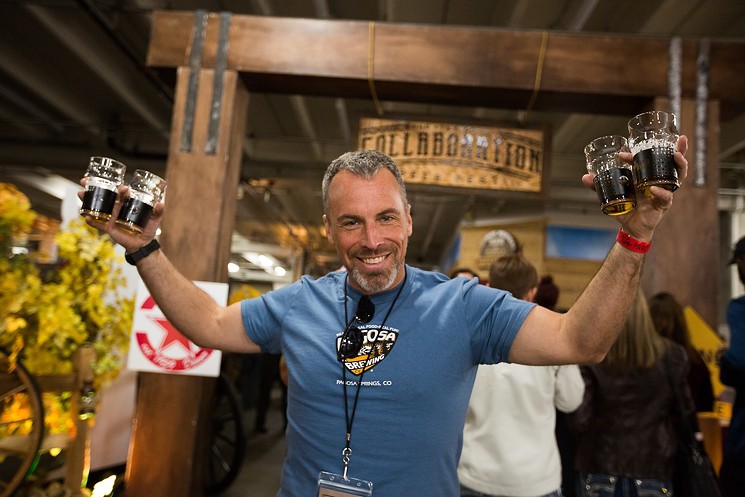 Toast (more than once) to Colorado Craft Beer Week and Collaboration Fest.
Danielle Lirette
Saturday, March 31
Those whose tastes lean more towards extravagance than temperance will want to clear their calendars (and possibly call in sick to work) from Saturday, March 31, through Saturday, April 7; Colorado Craft Beer Week kicks off with Collaboration Fest (below), but the next seven days are packed with suds-centric events. Starting Sunday, April 1, breweries around the state will be boasting beer releases, food pairings, specials, classes and tours along daily themes (education, food and beer, Colorado pint day, craft beer gear, new beer, and meet-the-brewer). Find a complete schedule of events at coloradobeer.org, and steel your liver for a week of  barley-based excess.

Imagine that old stalwart The Dating Game was still on the air. Imagine you went on it and didn't end up on a date with a serial killer; instead, you went out with a nice boy or girl and had to brew a beer together the first time you met. In a nutshell, that's the premise of Collaboration Fest. The beer festival has spent the past five years teaming up breweries and seeing what maniacal brews come from the partnership. This year, the fun is moving to bigger digs at the Hyatt Regency Denver, 650 15th Street, where on Saturday, March 31, you'll be able to imbibe creations from nearly 100 teams of brewers. Our most anticipated collabs? Local favorites Our Mutual Friend and TRVE Brewing Co., and Renegade Brewing Co. and French brewery Brasserie du Baril. The event runs from 4 to 7 p.m., though VIP ticket holders get in at 3 p.m. Get your ticket, $65 or $85, at the Collaboration Fest website.

The OG zombie.
Flickr/Michael Starcevic
Sunday, April 1
Brunch is big business every day in Denver, but never more than Sunday, April 1 — the perfect storm of Sunday morning, your hangover, and the resurrection of Christ. The most cursory Googling will point you in the direction of approximately 666 serious brunches you'd be proud to take your parents to, so we're not going to add to the fray; instead, we recommend you hit up Black Sky Brewery, 490 Santa Fe Drive, for its April Fool's! I'm Not Dead Costume Party. Dig up your children's Bible illustrations for inspiration and you may win the costume contest. And while all attendees will probably end up going to hell, at least the road will be paved with beer, Bloody Marys and mimosas. Find out more at Black Sky's Facebook page.


Wednesday, April 4
Just because we live in landlocked Colorado doesn't mean we can't enjoy quality oysters — sadly, it just means they cost a lot more. But the High West Oyster Fest hosted by Jax Fish House on Wednesday, April 4, is a great deal for anyone who enjoys the slippery little suckers, as the ticket price of $45 entitles you to drinks, a half-dozen of Jax's proprietary Emersum oysters, and bites from ten of the top fish houses around town, including Fish N Beer, Tammen's Fish Market, Stoic & Genuine, Wewatta Point and Lola Coastal Mexican. And if you can put together a team of four bivalve-loving buddies, you can compete in the oyster-eating competition (start practicing: the record is 147 oysters in two minutes). This shucker starts at 6 p.m. at Exdo Event Center, 1399 35th Street. Visit any Jax Fish House to purchase tickets, or get them online at the restaurant's website.

Elise Wiggins is thrilled to be cooking at Chef's Table Colorado.
Jennifer Koskinen
Saturday, April 7
The chefs cooking at Chef's Table Colorado on Saturday, April 7, are Denver's best. Justin Brunson (Old Major), Elise Wiggins (Cattivella), Bill Minor (Il Porcellino), Goose Sorensen (Solera) and Zoe Deutsch (Hinman's Bakery) are just some of the talent showing up at Wings Over the Rockies Air & Space Museum, 7711 East Academy Boulevard, from 6 to 9 p.m. to dazzle you with unlimited bites and beverages to raise funds for Denver Urban Scholars, which provides mentoring and academic support for high-performing low-income students from middle school through college. Get your ticket, $125, at chefstableco.com, where you can find a full roster of participating chefs.
Tuesday, April 10
Welcome to spring in Colorado: The weather is vacillating wildly between sunny patio temperatures and heavy, wet snowstorms, and we're all weary of winter squash and the unrelentingly brown and gray Denver landscape. Bring on the green Tuesday, April 10, when Fly by Night, a partnership between chefs Ben Whelan and Blake Stine (both alumni of Frank Bonnano's restaurants) will be putting on a pop-up dinner at The GrowHaus, 4751 York Street, to benefit Emily Griffith Technical College's Culinary Quick Start program. You'll be surrounded by sprouts while you dine on a five-course dinner inside a working greenhouse; the menu feels equally springy, boasting a veggie terrine with pea shoots and dill foam, roasted chicken with egg-yolk jam, and grapefruit cake with white chocolate. Dinner includes beverages and will run you $75; make your reservations to banish the vestiges of winter at Fly by Night's website.
Thursday, April 26
The 24th annual Dining Out for Life is just around the corner. On Thursday, April 26, more than 230 Denver and Boulder restaurants and breweries will donate 25 percent of their sales to Project Angel Heart, an organization that prepares and delivers medically tailored meals to people living with HIV/AIDS, cancer, heart disease and other life-threatening illnesses, so you can enjoy a great meal while doing a good deed. Plan ahead by making a reservation at one of the participating eateries, some of which will be donating a percentage of bar sales as well as food sales. Visit the Dining Out for Life website for a list of all restaurants taking part.

If you know of a date that should be on this calendar, send information to [email protected].