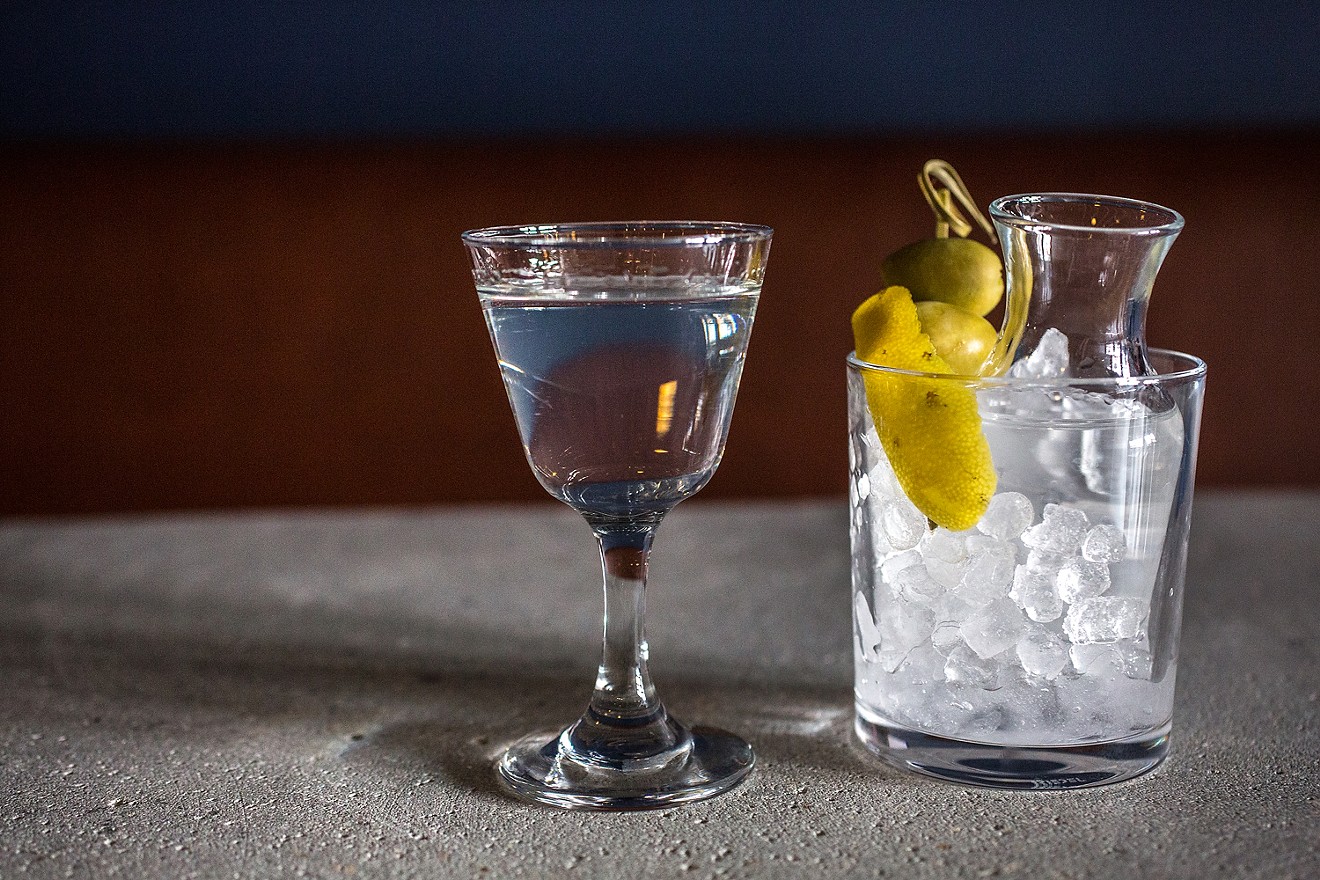 Dead Battery Club is Platte Street's newest place to recharge.
Mark Antonation
Dead Battery Club
2420 17th Street
303-477-2444
Dead Battery Club straddles the line between every-man and elegant in a long, narrow space that asks you to unplug and unwind. Although the DBC, operated by the same team that brought Carbon Cafe & Bar and Habit Doughnut Dispensary to Platte Street, is an all-day cafe, cocktail seekers will want to hit happy hour, when the joint fills with office workers, service-industry folks and neighbors for a casual and lively time.

Death & Co is part cocktail bar and part hotel restaurant inside the Ramble.
Danielle Lirette
Death & Co
1280 25th Street
720-996-6300
Surround yourself in the opulence and luxury of the Ramble Hotel while sipping a cleverly crafted cocktail at the bar or in a cushy lounge seat at Death & Co, which was founded in New York City and planted its second flag in Denver in May. Choose from a drinks menu that starts with "Fresh and Lively" and moves through "Light and Playful" and "Elegant and Timeless" before landing on "Rich and Comforting," just like the bar itself.

The essence of the orchard is captured in Haykin Family Cider's new products.
Mark Antonation
Haykin Family Cider
12001 East 33rd Avenue, Aurora
720-242-7292
This hidden cider house doesn't win points for its grand decor or hip location; it's just a simple tasting room in a warehouse in an industrial part of Aurora. You're not going to see and be seen, but rather to experience some of the most wonderful expressions of Colorado apples to make it into glass and bottle. Haykin produces single-variety ciders from apples picked, pressed and fermented in season, allowing the distinct flavor of each apple to shine through. Crisp, clean, complex flavors make Haykin the Champagne of ciders. We're not the only ones who have fallen in love with the tiny cidery; at this year's Great Lakes International Cider and Perry Competition (the Oscars of cider), Haykin took home multiple medals, including gold for its Akane and Sansa varieties.

Beers and dogs are the best things about Red Rocks Beer Garden.
Courtesy of Red Rocks Beer Garden
Red Rocks Beer Garden
116 Stone Street, Morrison
208-861-7873
When this secluded cottage and beer garden opened in April, it became an instant destination for day-trippers, concert-goers and neighbors in Morrison. A tight selection of local beers and a dappled patio off the town's main drag are the main draws here. With a spot in the shade and a pint in hand, you might forget all about your Red Rocks tickets.

Tap Fourteen gives Uptown a new indoor/outdoor beer destination.
Facebook/Tap Fourteen
Tap Fourteen Colorado Beer Garden
400 East 19th Avenue
720-328-1238
Tap Fourteen opened its second Denver beer bar in January, following the original on the rooftop of Hayter's at 1920 Blake Street. This one is on street level, so it lacks the views of the LoDo location, but the wrap-around patio makes an ideal spot for neighbors and their pooches to wander in for a cold brew or two. Seventy tap handles make decisions a little tough, but you'll never want for something original, and the kitchen goes a step above standard taproom fare.