There are great NYE dining options for every mood, from top hat to baseball cap. Danielle Lirette
You may already know where you'll be when the ball drops at midnight, but where will you go before that? With all the great options around town, from brunches to bird to baller caviar services, you should have no problem finding the perfect last meal of the year. Here are our top ten picks, followed by dozens of other options.

Dim sum is what's up at Ace on New Year's Eve.
Mark Antonation
Dim Sum and Then Some
Ace Eat Serve, 501 East 17th Avenue
The Uptown ping-pong palace is a go-to for partiers all year ’round, with its excellent Asian-inspired food, strong drinks and games galore. On New Year's Eve, it's rolling out the red carpet — and the dim sum carts — with a dazzling array of bao buns, soup dumplings, shumai, wontons, and oyster, rice and noodle dishes. If your group is of one mind, though, you can opt for the king crab feast ($69 per person, four minimum), which brings a heaping pound of crab, plus soup, noodles, pickles, salad and sauces; it's so extravagant, the feast must be pre-ordered. Call the restaurant at 303-800-7705 for reservations.

New Beer's Eve
The Lobby, 2191 Arapahoe Street
Indulge in a different kind of bubbly this New Year's Eve. Starting at 6:30 p.m., eighteen-plus breweries (including locals Renegade, Great Divide and Novel Strand, along with New York-based Ommegang) will be pouring beers they've created over the past twelve months. Guests can start with dinner — three courses of beer-inspired dishes — or opt for pours alone, though pros know that a full stomach will help offset all those brews they'll consume before the clock strikes twelve. Dinner and drink packages start at just $50 at twoparts.com, so even the most frugal partiers will have a price point to celebrate.

New Year's Eve at Bettola Bistro
10253 East Iliff Avenue, Aurora
Reserving a table in an Aurora strip-mall restaurant may not be your first idea when planning your final meal of 2018. That's a shame, though, because Bettola's intimate setting (the kitchen is handled by Samir Mohammad, the front of the house by his wife, Rachel Firestone) is just the spot to enjoy an inventive five-course menu, with such options as oxtail tortellini, juniper- and red wine-braised beef cheeks, and Gorgonzola cheesecake for $80; wine pairings are available for an additional $65. Reservations are required; call 303-750-1580 or email [email protected] to make yours.

The Brown is one of Denver's poshest party palaces.
Danielle Lirette
New Year's Eve Champagne Brunch
Ellyngton's at the Brown Palace, 321 17th Street
Ellyngton's  legendary Champagne Brunch is usually served on Sunday mornings, but this year, it's also available on the morning of New Year's Eve. There's nothing that will make you feel fancier than starting the last day of the year in Ellyngton's elaborately decorated, old-school dining room, enjoying a buffet of sushi, seafood, carving stations, omelets, waffles, pancakes...and so much more it would take until 2019 to list it all. The meal alone runs $53.95, or add Domaine Chandon ($63.95), Moët et Chandon ($73.95) or Dom Perignon ($315 total). Visit brownpalace.com to book your brunch before it sells out.

Ring in the New Year with taste and style at Annette's NYE Scandinavian Brunch.
Danielle Lirette
New Year's Eve Scandinavian Brunch
Annette, 2501 Dallas Street, Aurora
The universally loved Annette is reprising its Scandinavian New Year's Eve Brunch with expanded offerings, from smørrebrød (open-faced Danish sandwiches served on rye bread and topped with pickled mackerel, shallots, dill and crème fraîche) to smörgåsbord (a spread of both hot and cold dishes, in this case sausage, potato pancakes, poached eggs with lingonberry jam and fennel and herb salad). Diners will also get apple aebleskivers (tiny pancake-like puffs fried in a pan that resembles a deviled egg tray) and a shot of housemade glogg; they can add a bottle of bubbly to the $35 brunch for $60, and caviar for $10. Make your reservation for one of three seatings (9 a.m., 11 a.m. or 1 p.m.) at annettescratchtotable.com.

NYE Coast to Coast
Epic Brewing Company, 3001 Walnut Street
What's better than an enthusiastic New Year's countdown? Four of them — one for each time zone. Epic Brewing Co. is taking its name seriously and throwing four parties over the course of one sprawling evening, with four buffets and beer pairings. From 9 to 10 p.m., Southern barbecue will celebrate the Eastern time zone; from 10 to 11 p.m, Louisiana Creole cuisine marks Central; from 11 p.m. to midnight, tamales are on tap for Mountain, and (in a reach), doughnuts from Portland-based Voodoo Doughnut will salute the Pacific time zone from midnight to 1 a.m. Stay for just one countdown, or earn your partying merit badge by making it through all four. Tickets, $60, are on sale now at eventbrite.com.

Urban Farmer's New Year's Eve dinner is luscious and luxe.
From the Hip Photo
Soirée in the Parlor
Urban Farmer, 1659 Wazee Street
Urban Farmer is upping the ante on the typical three- or four-course prix fixe menu; its New Year's Eve bill of fare boasts seven swanky courses. Such classics as oysters, wagyu tomahawk steak and croquembouche are represented, of course, but we're tempted by the menu's creative touches: a smoked cocktail paired with the oysters; confit egg yolk that accompanies the seafood bisque; a goat cheese truffle coated in vegetable ash and served with honey from the restaurant's own hives. A Veuve Clicquot toast will usher in 2019. The dinner, $150, includes wine and cocktail pairings; tickets are available at eventbrite.com.

Fried chicken is an excellent way to ring in the new year.
Courtesy of The Post Brewing Co.
Tower of Chicken
The Post Brewing Co., four locations
You want to end 2018 on a high note, with a dinner so memorable, so truly spectacular, that you and your friends will recall it for years to come — even if your champagne consumption renders other recollections of the evening a bit blurry. There's only one meal that meets that criteria: Post Brewing Co.'s Tower of Chicken. It's an epic spread, with 48 pieces of fried chicken, five large sides and three pitchers of beer for you and fourteen of your closest friends. Our biggest question: Will the chicken come in the form of the Eiffel or Leaning tower?There's only one way to find out: Call the restaurant to reserve your table for this $300 feast, which will be served all day.

We Are the Champignons
Beast + Bottle, 719 East 17th Avenue
Paul C. Reilly's kitchen is closing out 2018 with a particularly rousing installment of its popular Musical Chairs dinner series: We Are the Champignons, a culinary homage to Queen. The five-course dinner inspired by the band's bombastic songs will include dishes based on "Another One Bites the Dust" (pork belly and root veggies with leaf lard powder) and "Bohemian Rhapsody" (bacon-wrapped scallops with braised cabbage and pumpkin spaetzle) — and, given the name of the event, we expect an epic mushroom dish at some point. Dinner is $95 without drinks or $160 with wine pairings, and reservations are required; call the restaurant at 303-623-3223 to reserve your seat at the table.

New Year's Eve at Flagstaff House
Flagstaff House, 1138 Flagstaff Road, Boulder
Nothing says excess like caviar: It conjures images of big spenders swilling Champagne (the capital-C kind), slurping oysters and downing heaping spoonfuls of caviar before heading out on the yacht. But even if you're not a magnate, you can splurge on the Flagstaff House's caviar tasting flight for $78. Three varieties of the delicacy (Ossetra, Siberian and American) will be served with whole-wheat blini and traditional accompaniments. Need something to wash it down? The bar has created a fennel-infused vodka to go with the roe; half bottles will be available, or you can choose from the restaurant's award-winning wine selection. Call 303-442-4640 to book a table for this over-the-top experience.

New Year’s Eve at Adelitas: Both locations of the Mexican joint are eschewing their usual fare for a fancy dinner of bistec y langosta (that’s steak and lobster to you); includes a house margarita and midnight tequila and champagne toast. 5 p.m.-1 a.m., $46.95, Adelitas Cocina y Cantina, 1294 South Broadway, and 2609 West Main Street in Littleton, 303-778-1294, adelitasco.com.

New Year’s Eve at Atelier by Radex: Indulge in inspired French(ish) fare that will send you into the upcoming year with a full belly and a happy heart; call to reserve your table for the special four-course prix fixe menu. 4-11 p.m., $125, Atelier by Radex, 2011 East 17th Avenue, 720-379-5556, atelierbyradex.com. 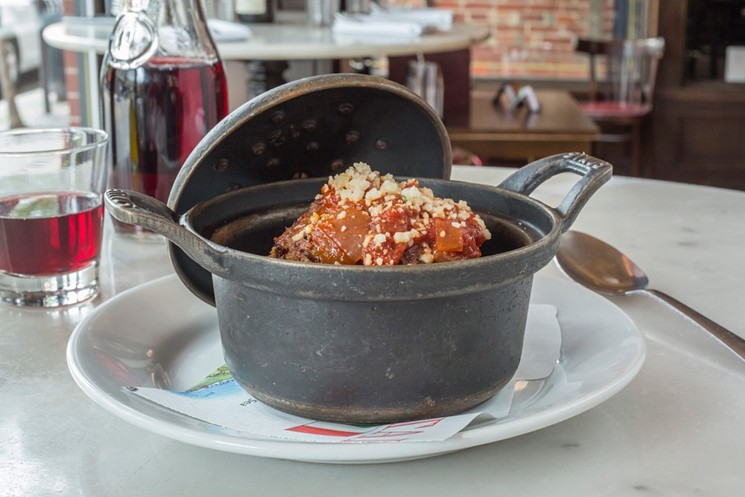 New Year’s Eve at Nocturne: Reserve a table at one of Denver’s most accessible jazz clubs and enjoy a delectable four-course meal from the underrated kitchen while listening to a set from the Peter Sommer Quintet. 6 and 9 p.m., $135-$185, Nocturne, 1330 27th Street, 303-295-3333, nocturnejazz.com.

New Year’s Eve at STK: The nightclub masquerading as a steakhouse is in its element on New Year’s Eve, when it will offer a premium open bar with Chandon and passed bites from 9 p.m. to 1:30 for $99. Sit down for dinner starting at 4 p.m. and get early access to the bubbly for a discount; NYE dinner specials available. DJ countdown, balloon drop and more at midnight. STK, 1550 Market Street, 720-597-8010, eventbrite.com.

New Year’s Eve at The Wolf’s Tailor: Choose an early or late seating for a family-style menu fusing Italian and Asian tastes. Enjoy a s’mores bar and some bubbly by the bonfire. The Wolf’s Tailor, 4058 Tejon Street, 303-456-6705, thewolfstailor.com.

Winter Wonderland and Midnight Brunch at Edge: Don your winter-white apparel and get white-out drunk at this party that offers bottomless champagne, mimosas and brunch bites from midnight to 2 a.m.; the ticket prices includes your first drink, and DJ Manos will be spinning all night. 9:30 p.m.-2 a.m., $113, Edge Restaurant and Bar, 1111 14th Street, 303-389-3050, edgerestaurantdenver.com.
KEEP WESTWORD FREE... Since we started Westword, it has been defined as the free, independent voice of Denver, and we'd like to keep it that way. With local media under siege, it's more important than ever for us to rally support behind funding our local journalism. You can help by participating in our "I Support" program, allowing us to keep offering readers access to our incisive coverage of local news, food and culture with no paywalls.
Make a one-time donation today for as little as $1.