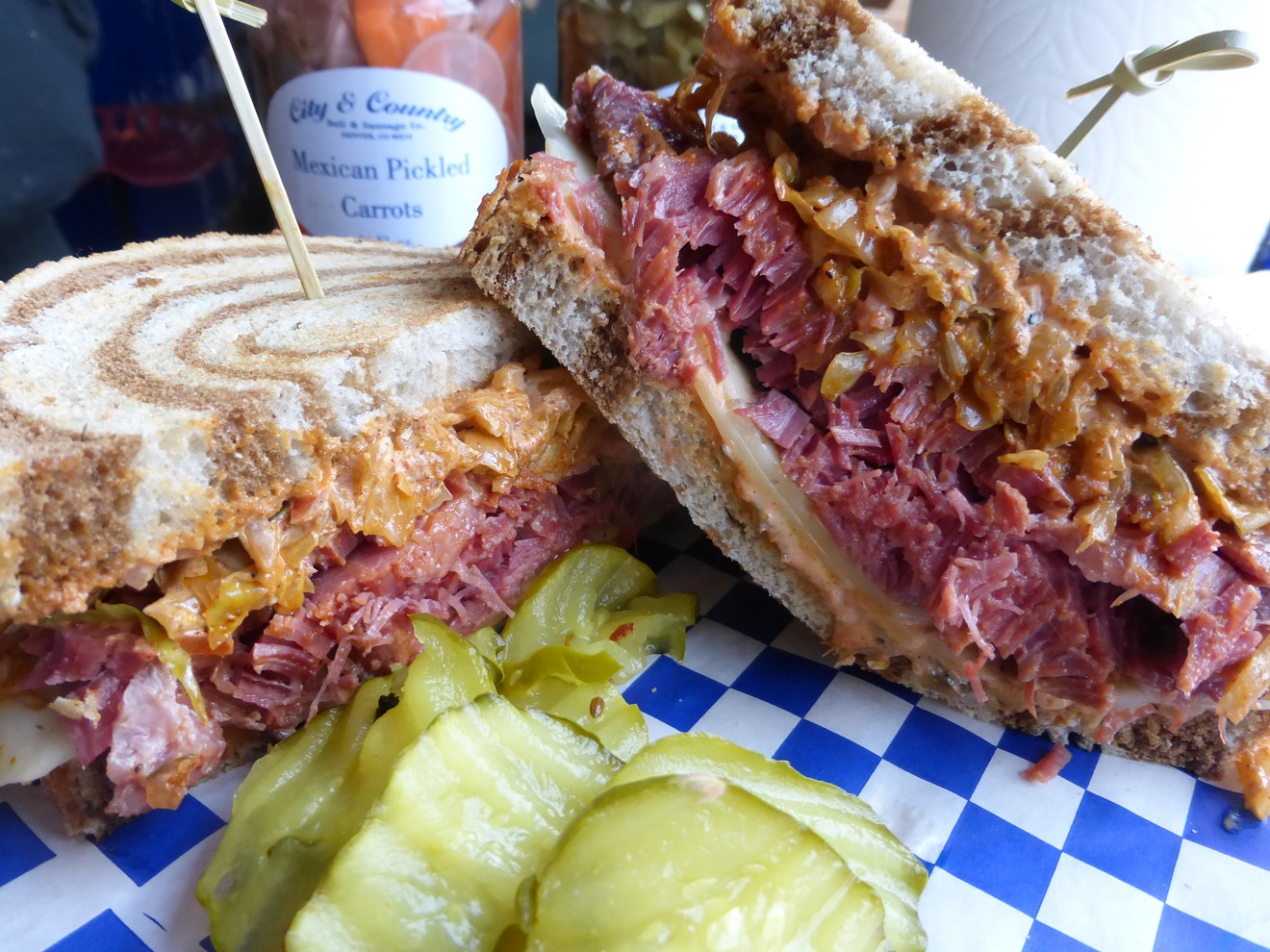 Ken Holloway
New York Deli News
7105 East Hampden Avenue
303-759-4741
nydelinews.com
The hustle and bustle of this deli-cum-diner could be right at home in the Bronx, which is where the New York Deli News sources its corned beef and rye bread. Some foods that are made in New York just cannot be duplicated anywhere else, and the crew strives to present all its deli favorites classically done. The most popular way to order the Reuben here is half corned beef and half pastrami. But whether you go full corned beef or fifty-fifty, the sandwich is built with twice-baked rye bread, Russian dressing and piles of succulent meat topped with sauerkraut and Swiss cheese melted under a char-broiler. The entire mound is served open-faced, so you have the option to stack the two halves together or eat them separately (fork and knife required). If that's not enough, there's just enough room on the plate for a side of crunchy coleslaw and some silky sweet dressing. Ken Holloway
Olive & Finch Eatery and Bakery
1552 East 17th Avenue, 303-832-8663
3390 East First Avenue, 303-955-0455
oliveandfincheatery.com
Olive & Finch chef/owner Mary Nguyen knows how to make people happy with sandwiches — the Reuben high among them. Mouth-watering pastrami is smoked in-house, hand trimmed and sliced thin; it's luscious and finishes with a peppery bite. Adding to the flavor festival is a bright and tangy sauerkraut, Russian dressing (a house recipe) and Swiss cheese. All of this is built on thick slices of rye bread baked by Olive & Finch and expertly grilled to a golden-brown crunch. Lunch is rounded out with potato chips and a pickle spear for a fantastic meal. Ken Holloway
Salt & Grinder
3609 West 32nd Avenue
303-945-4200
saltandgrinder.com
Located in Highlands Square, Salt & Grinder is owner Frank Bonanno’s take on a traditional New Jersey Italian deli. Bonanno is passionate about crafting great food, and this was clearly evident in the Reuben. General manager Jessica O’Brian explains that S & G's version of the sandwich is built as a triple-decker, with thin-sliced rye bread from the Grateful Bread Company. Both corned beef and pastrami are sliced to order and shaved fine. The rich and juicy meats are perfectly balanced by the tang of the sauerkraut and Thousand Island dressing. The Reuben is beautifully composed, deftly grilled and sided with a refreshing dill pickle spear and a choice of several side dishes. In a word, this Reuben is sublime; O’Brian says the secret ingredient is “good ol' classic East Coast deli love.” Ken Holloway
Steuben’s Arvada
7355 Ralston Road, Arvada, 303-830-0096
523 East 17th Avenue, 303-830-1001
stuebens.com
Mark Friday as Reuben day on your calendar, because that’s the only day you can wrap your hands around the sandwich at Steuben's. The star of this signature sandwich is the house-smoked pastrami, which lives up to the high standards that people have come to expect from Josh Wolkon's restaurants. On its way to becoming pastrami, the brisket is meticulously seasoned and then hickory-smoked low and slow for hours. The sandwich is built with a fifty-fifty blend of pastrami and corned beef, sliced thin and piled together, giving the sandwich a rich and smoky combination of flavors. Just as impressive is the housemade Russian dressing, which is luxuriously creamy and heady with hints of Dijon mustard and horseradish. The sandwich is rounded out with melted Swiss, marbled rye, and just enough sauerkraut to give the whole thing a little tang.

Ken Holloway
Zaidy’s Deli
121 Adams Street
303-333-5336
zaidysdeli.com
Opened in 1992 in Cherry Creek, Zaidy’s Deli is the creation of Gerard Rudofsky, who claims to have suffered a “midlife correction” back then. Now along with his son Jason Rudofsky and his loyal staff (like thirteen-year veteran server Adele Engels), the owner is delighting Cherry Creek food lovers with breakfast all day, nostalgia-inducing sandwiches, deli favorites and a pastry chef rocking out amazing desserts. You can order a classic Reuben with all corned beef here, but many people order it with half corned beef and half pastrami or turkey. This is the quintessential Jewish deli Reuben, loaded with a double helping of thinly sliced corned beef, straight-up sauerkraut, melted Swiss cheese and housemade Russian dressing, all lusciously ensconced in perfectly grilled Jewish rye bread. If you can’t get enough corned beef, the kitchen also cooks up Reuben omelets and corned beef hash with eggs. And for a truly daunting platter, Zaidy’s Deli (which translates to Grandfather’s Deli in Yiddish) builds a Reuben on twin latkes instead of bread.