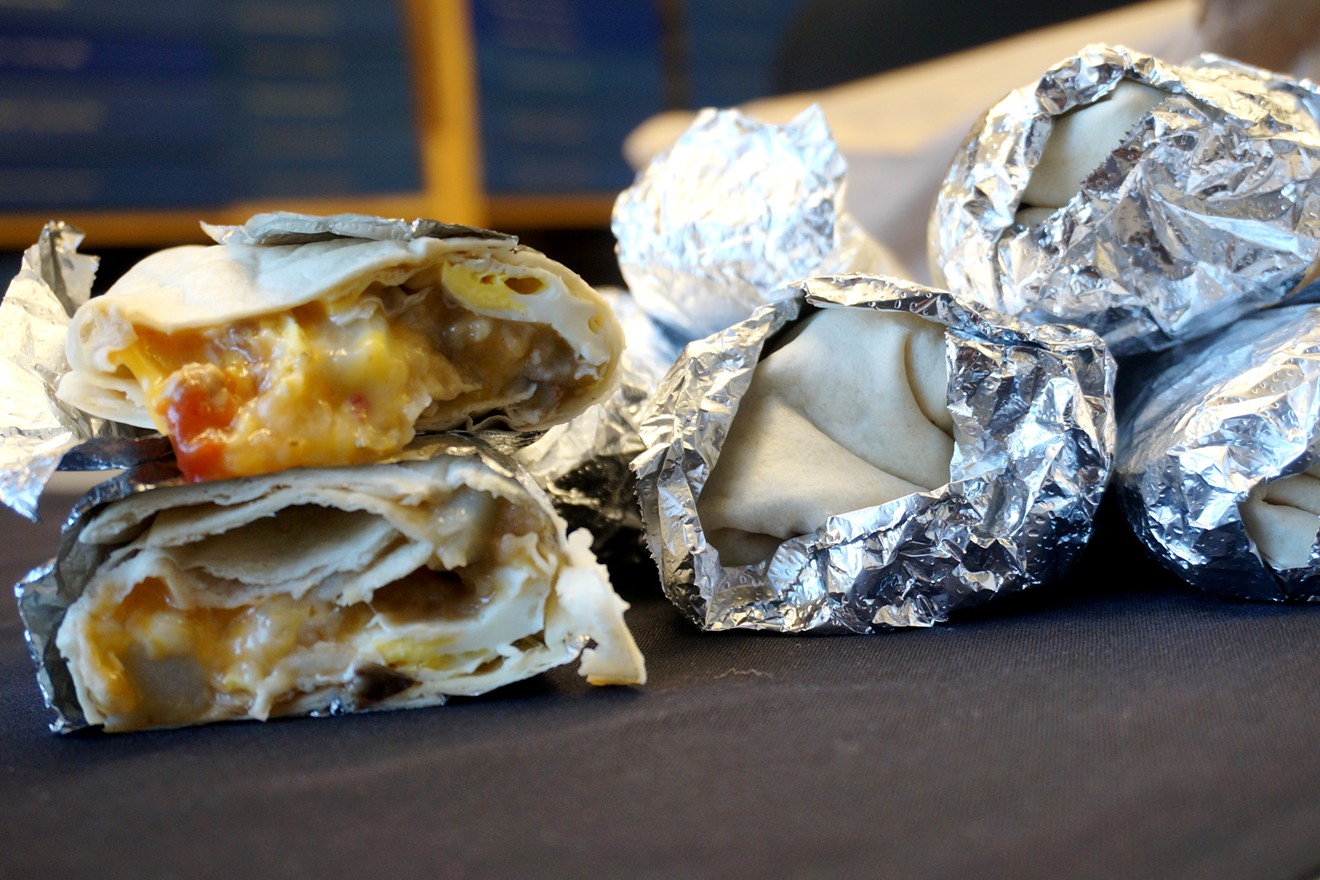 This is what you're hoping your office mates have remembered when you're on your way into work every morning. Mark Antonation
Breakfast burritos are such an important part of the average Denverite's morning that Mayor Michael Hancock recently declared the second Saturday of every October to be Breakfast Burrito Day, which means we'll be celebrating October 14. The sleek silver bullets filled with eggs, green chile and potatoes (at the bare minimum) can be found all over town, from the most bare-bones street carts to some of the metro area's finest establishments. Here are the ten best handheld breakfast burritos, in alphabetical order.

Araujo's
2900 West 26th Avenue
303-455-3866
Araujo's is one third of the Burrito Triangle at Federal Boulevard and West 26th Avenue, with Santiago's and the soon-to-close Jack-n-Grill forming the other two points. Beans add a filling layer to these bargain burrito bombs, and a daily selection of breakfast meats means variety and flavor throughout the week. 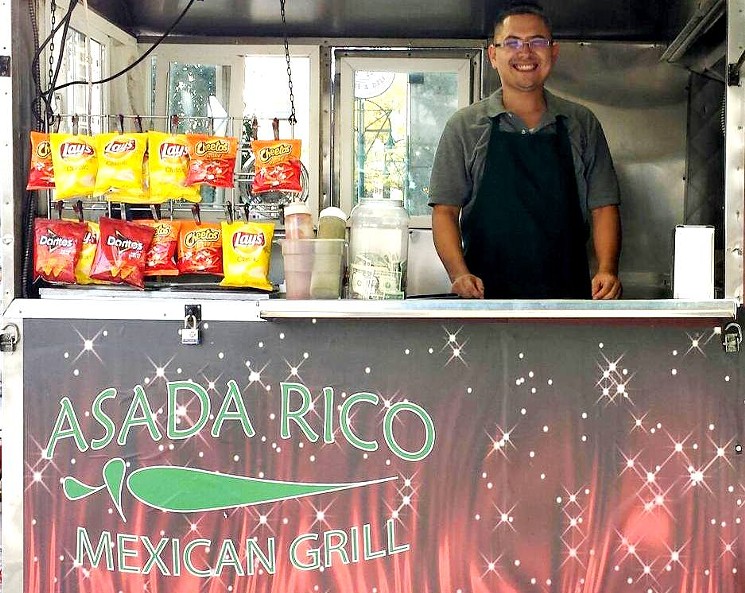 Facebook/Asada Rico
Asada Rico
813 16th Street
720-434-2698
Express breakfast is the name of the game on the 16th Street Mall, where folks up and about during the breakfast hour are in a hurry (and the tourists are still sleeping soundly). The standard egg-and-potato number does the trick, but for a splurge, add steak to help fuel you through the day.

Blackbelly Butcher
1606 Conestoga Street, Boulder
720-479-8296
Breakfast burritos from a butcher in Boulder? Bah! Don't be so quick to judge, though: Chef/owner Hosea Rosenberg has the New Mexico credentials (having grown up there) and is committed to turning out good morning grub that does his home state proud. Get the "o.g." with eggs, tater tots, cheese and Hatch green chile, or add the butcher's choice of house meat for a buck extra. This is what a burrito joint should look like.
Mark Antonation
Bonfire Burritos
17025 South Golden Road, Golden
720-556-6269
This is how a breakfast burrito vendor should look: a yellow trailer on the roadside with a few chairs out front and a line at the window. With names like the Chupacabra and the Jackalope, these burritos give an authentic taste of the Southwest with a little fun thrown in for good measure. 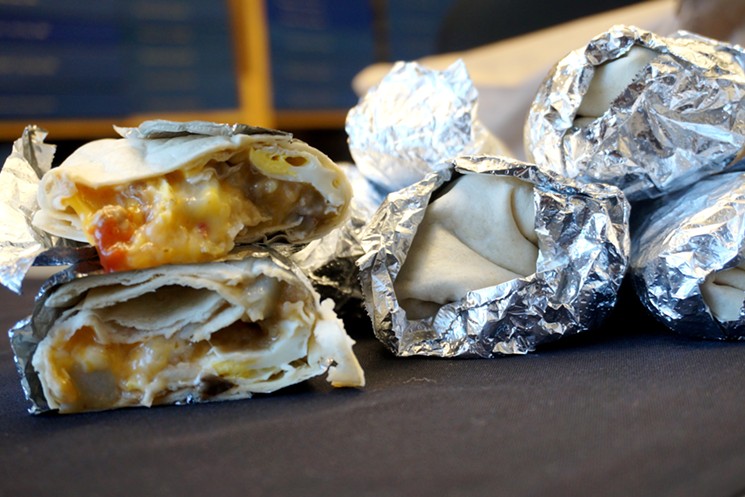 This is what you're hoping your office mates have remembered when you're on your way into work every morning.
Mark Antonation
The Burrito Company
1290 South Santa Fe Drive
303-871-0512
The Burrito Company recently got a facelift, giving the exterior a modern new facade. But inside, you'll find the same counter-service model with only a single bench for seating while you wait. You won't have to wait long, though, because the ladies behind the counter keep the torpedoes firing. Speaking of fire: Go with the spicy green chile here; the added heat is welcome on crisp Denver mornings. 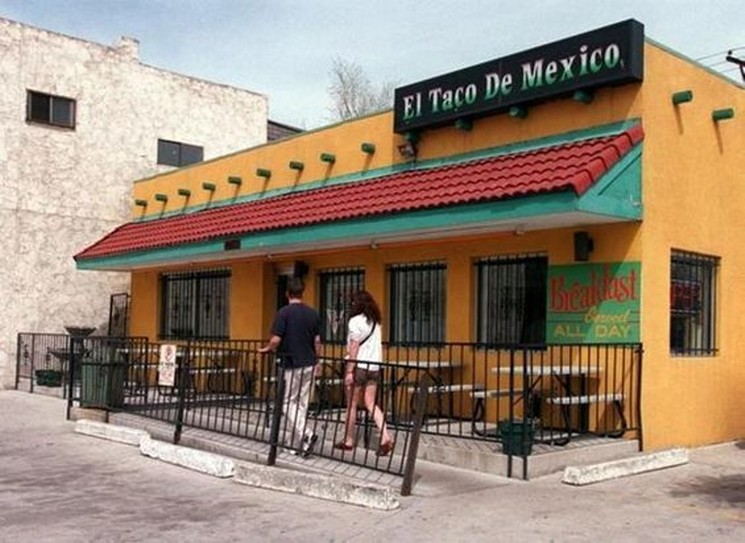 Breakfast burritos can be ordered all day at El Taco de Mexico.
Westword
El Taco de Mexico
714 Santa Fe Drive
303-623-3926
El Taco de Mexico isn't just a hole-in-the-wall stop for a quick breakfast; it's one of Denver's most iconic eateries, where a seat at the diner-style counter is a cherished perch for any fan of Mexican food. The breakfast burritos here come with rice and beans in addition to scrambled eggs, making them stand out a little from the competition. Add chorizo, ham, bacon or potato for some extra heft.

El Zarape
1065 Federal Boulevard
303-893-0394
El Zarape is tucked away on Federal Boulevard, nestled into a shared parking lot with a used-car dealership. The best clue to its location: a line of cars that spills out onto Federal as hungry drivers wait for their unbeatable breakfast burritos. A homemade tortilla is wrapped around freshly fried potatoes, eggs and your choice of breakfast meat, wrapped in aluminum foil and then stashed in a paper bag with two packages of salsa. 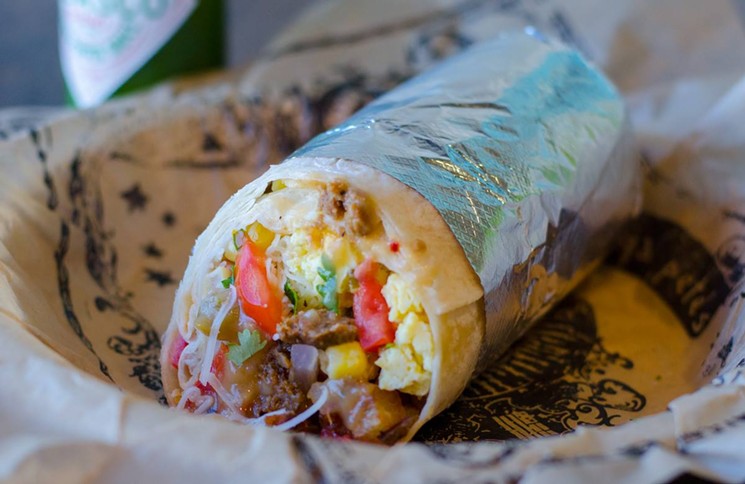 Breakfast is hearty at Illegal Pete's.
King Josh
Illegal Pete's
Multiple locations
Illegal Pete's has built a reputation on forearm-sized burritos bursting with fresh ingredients, but fewer citizens are aware that breakfast is just as good an option at this homegrown chain. You won't find slender two-buck specials here; the burritos start at $4.49, but you can load them up with goodies beyond the basic egg-and-potato combo. As a bonus on Saturday, October 14, customers will be able to get a free breakfast burrito between 9 a.m. and 1 p.m. at all Denver locations (though options will be limited to keep the line moving).

Quijote's
1043 Broadway
720-542-8484
Quijote's is a quiet little joint on Broadway that fills up for lunch despite the many options nearby. But in the wee hours of the morning, you can stop in for a solid breakfast burrito and grab a fresh juice — not to mention really good coffee — to balance out your meal. 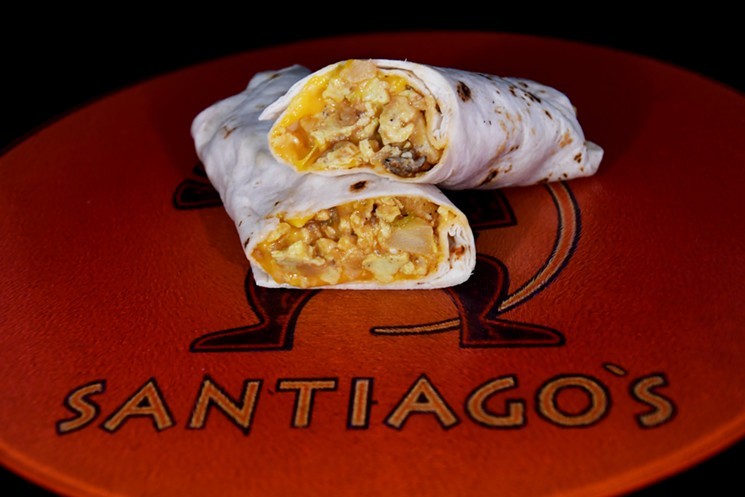 Santiago's is synonymous with breakfast burritos in Denver.
Santiago's
Santiago's
Multiple locations
Beyond the burrito peddlers making the rounds with Igloo coolers packed with breakfast for all, Santiago's is the company that has made breakfast burritos nearly ubiquitous in Denver. Since 1990, Carmen Morales's chain has guaranteed that crews of construction workers, desk jockeys and other early risers can face the day with foil-wrapped repasts clutched tightly in hand.
KEEP WESTWORD FREE... Since we started Westword, it has been defined as the free, independent voice of Denver, and we'd like to keep it that way. With local media under siege, it's more important than ever for us to rally support behind funding our local journalism. You can help by participating in our "I Support" program, allowing us to keep offering readers access to our incisive coverage of local news, food and culture with no paywalls.
Make a one-time donation today for as little as $1.