Save This Bar: Discovery Tap House in Wheat Ridge Is on the Brink of Closing Discovery Tap House has faced a series of challenges over the years and hopes to come out on top. Discovery Tap House
Discovery Tap House celebrated its five-year anniversary in late August. However, despite having a loyal base of regular customers, all is not well: The bar is on the brink and is making every effort to remain open.

The story of Discovery Tap House starts back in 2017. Gary Thomas and his wife, Karen J Carpio-Thomas, were avid home brewers, regularly visiting local breweries and dreaming of starting their own someday, eventually landing on the idea of a taproom. "Breweries are very costly to start," explains Gary, "so we decided we could provide beers from all over, especially Colorado."

The Thomases opened at 4990 Kipling Street in Wheat Ridge in August 2017, and while they were up to the task of the initial buildout, they underestimated the marketing required at launch. "This [location] was wide open, off a busy street," says Gary, but organic traffic wasn't enough. Worse, Gary was soon laid off from his longtime job, just four months after opening the bar.

In order to stay afloat, he had to find a new full-time job outside of the bar, where he still works today, while he and Karen are the only two people that have ever officially worked at the bar over its five years in business. 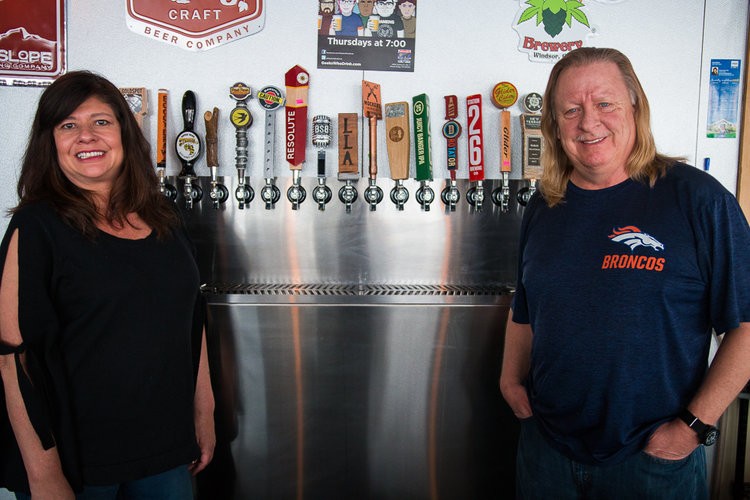 Karen J Carpio-Thomas and Gary Thomas, the owners of Discovery Tap House.
Discovery Tap House
Despite the challenge of a slow start, Discovery Tap House began to find success. Regular customers were delighted to come into the bar and discover new beers from breweries they often hadn't experienced before. With Gary working full-time, Karen primarily curates the tap list and puts an emphasis on small producers not commonly found elsewhere. "I picked Lady Justice because we've been big fans of them for a while," she says. You can expect to find breweries like Over Yonder Brewing, Goldspot Brewing, Strange Craft Beer, Wah Gwaan Brewing and Loveland Aleworks on tap. "Everyone knows WeldWerks," says Karen. "They're great, but they're everywhere, so we try to seek out breweries that aren't so widely distributed."

Despite being open over forty hours a week and running the tap house themselves, the Thomases still find time to regularly visit new breweries on their only day off, Sunday. They have a passion for local breweries, and these visits are a testing board for bringing the beer on draft back at Discovery. "The tap list takes a lot of work because so many of the breweries we serve are independently distributed," notes Karen. "It's not easy," she adds, "but we chose this."

Being such a lean team has its advantages, too, and is a major factor in why the business has a core of loyal followers. Patrons can rely on a consistent bartender who knows them on a personal level, and feedback about the beers instantly goes to the owner, since they are the ones serving the brews. The result is a Cheers-like vibe. "Whenever I go to Discovery, Karen is there with a smile on her face to greet me," says longtime customer and Arvada resident Robin Zimmerman. "They have a great selection of local brews, and they rotate them regularly, meaning there's always something new to try." A pair of patrons dressed up, dogs in tow, as the cast of Schitt's Creek, for a costume contest.
Discovery Tap House
For a while, the friendly and welcoming atmosphere looked like it might be enough to find success. The tap house started growing after a slow start, and the bills were being paid. Then COVID hit. While the Thomases were inspired by a group of customers who sat outside all winter in ski attire, drinking beer until the COVID-required closing time, the business's bottom line was hit hard. The Thomases didn't get any relief from their landlord, either.

The bar started seeing a strong recovery about a year after the pandemic, but by then there was another issue looming: The neighborhood homeless population was growing out of control. The area around Discovery is just off I-70 and Kipling, with nine motel/hotels in the immediate vicinity. Many of those businesses have been a magnet for the growing homeless population, as have the busy off-ramps from the highway.

While the Thomases don't place the blame on a general group of people, the City of Wheat Ridge has stated that those nine motel/hotels are responsible for roughly 10 percent of police calls. "This area of town gets a bad rap," Karen admits. "Unfortunately, there's not a lot that we can do about that. It's going to take a long time [to improve]."

The Thomases are doing what they can to keep their current customers happy while adding new regulars to the mix. Karen has been encouraged by the success of the special events that she plans, and the taproom is very dog-friendly — so much so that Karen is now selling dog treats from a local vendor. She also held a beer-and-food pairing, with a special non-alcoholic drink for the dogs. "The dogs loved the drink," muses Gary. The bar is very dog-friendly.
Discovery Tap House
Karen is also planning Spread the Jam Saturdays, something she hopes will be a regular jam-band-themed series of events. The Thomases see the most potential for Saturdays, a day many locals spend time with their families or to visit Olde Town Arvada, where dozens of popular businesses in a small area combine to create a true destination. Discovery Tap House has also seen some success by working with other local businesses. The tap house doesn't serve food, so it has leaned on neighbors Kickin Wings and Real Thai to deliver food to the bar. Patrons can also bring their own food in.

The Thomases are hoping that the recent uptick and their dedication to every customer and tap line will be enough to find long-term success. "We don't need to be rich; we just want to be comfortable," Gary concludes.

Discovery Tap House is located at 4990 Kipling Street, Wheat Ridge and is open from 3 to 10 p.m. Monday through Thursday, 2 to 10 p.m. Friday and 2 to 9 p.m. Saturday. For more information, visit discoverytaphouse.com.
KEEP WESTWORD FREE... Since we started Westword, it has been defined as the free, independent voice of Denver, and we'd like to keep it that way. With local media under siege, it's more important than ever for us to rally support behind funding our local journalism. You can help by participating in our "I Support" program, allowing us to keep offering readers access to our incisive coverage of local news, food and culture with no paywalls.
Make a one-time donation today for as little as $1.