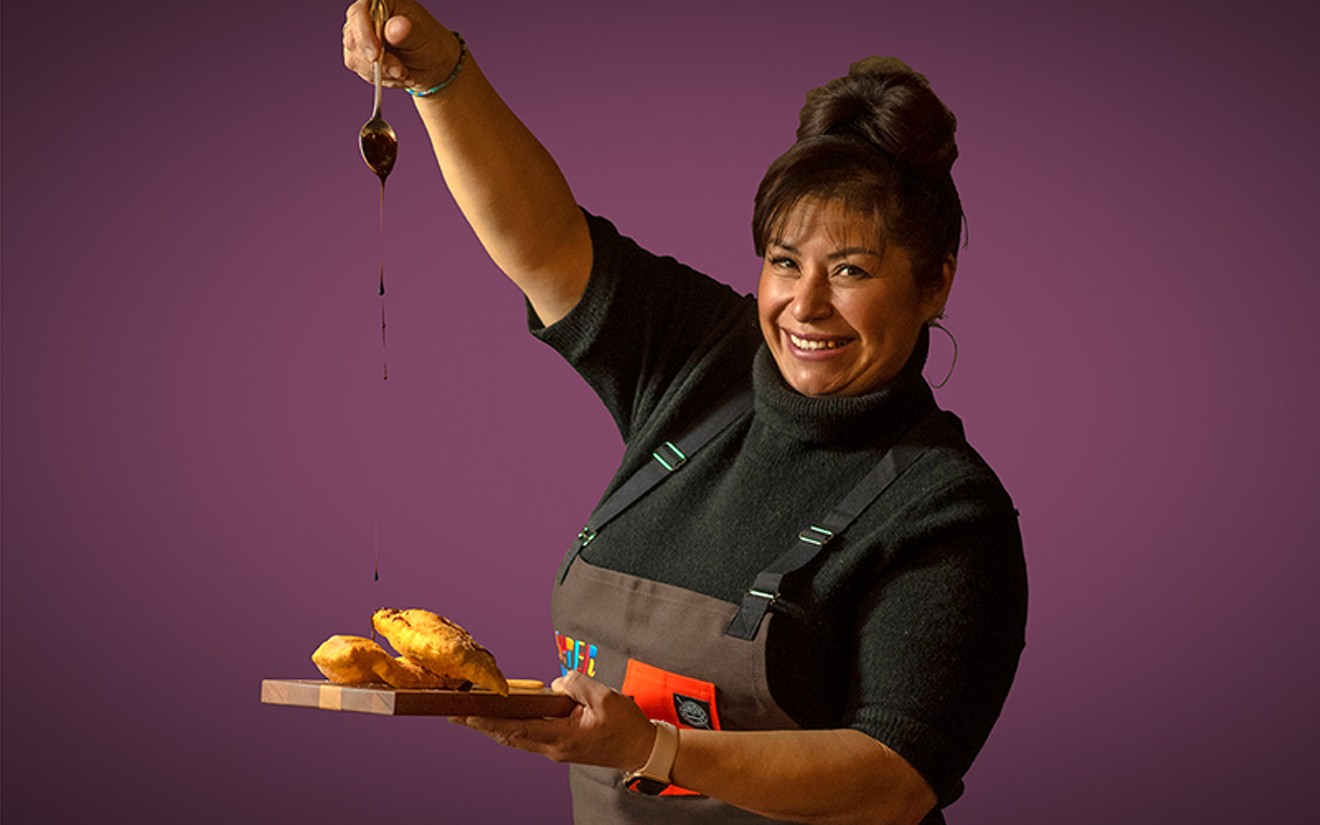 Dana Rodriguez will be competing at the Food Fight for Reproductive Rights. Evan Semon
"We were feeling pretty despondent over the Supreme Court's decision to overturn Roe v. Wade," says Kari Nott, executive director of Nathaniel Rateliff's foundation, the Marigold Project. "It was definitely a moment of reflection and wondering what we could do."

One of the businesses with which the Marigold Project works closely is Block Distilling Co.; in 2021, they collaborated on Night Sweat Bourbon. Now they have joined forces once again to support access to reproductive rights through Food Fight for Reproductive Rights, an event set for the Block's tasting room, at 2990 Larimer Street, on Sunday, August 28. Tickets are $100, and space is limited to just 100 guests; admission includes unlimited food bites, taster cocktails and small desserts.

"We were coping with some dark humor," Nott says of how the event came together. "Then we said, 'Hey, what if we have an event modeling community action?'" 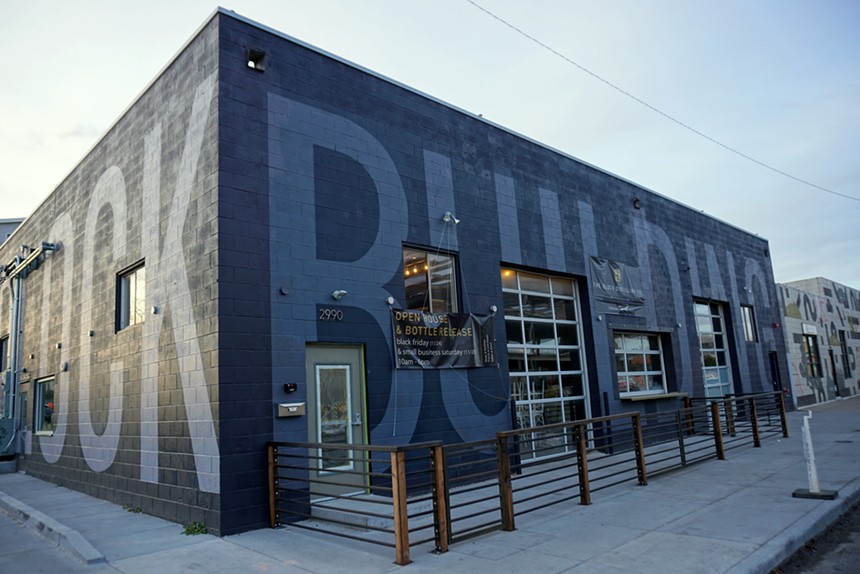 Block Distilling Co. is hosting the August 28 event.
Veronica Penney
"We're always looking for ways to collaborate to support different causes," says Block owner Kraig Weaver. "We're constantly trying to learn how we can use the platforms we have to support the causes we get behind, and the Marigold Project is such a great partner in that."

At the event, three local chefs will pair with bartenders on a food and cocktail offering. Attendees will be able to vote for their favorite pairing, and a panel of judges (including two members of the Night Sweats) will choose one winner for the Top Chef award — a golden uterus trophy made by local ceramics artist Sacha Von Reckers.

Competition is sure to be stiff, as all three participating chefs are heavy hitters. The lineup includes Penelope Wong, owner of the uber-popular Yuan Wonton food truck, as well as two 2022 James Beard Award finalists for Best Chef, Mountain: Dana Rodriguez and Jose Avila.

Rodriguez, who owns Work & Class, Super Mega Bien and Cantina Loca, was also chosen by South Park creators Trey Parker and Matt Stone as the new executive chef of Casa Bonita, which is currently being  renovation.

Last year Avila opened La Diabla, our 2022 pick for the Best New Restaurant; he also does a lot of work with Re:Vision in the Westwood neighborhood, where he serves up Hidalgo-style barbacoa at his Sunday-only pop-up, El Borrego Negro. 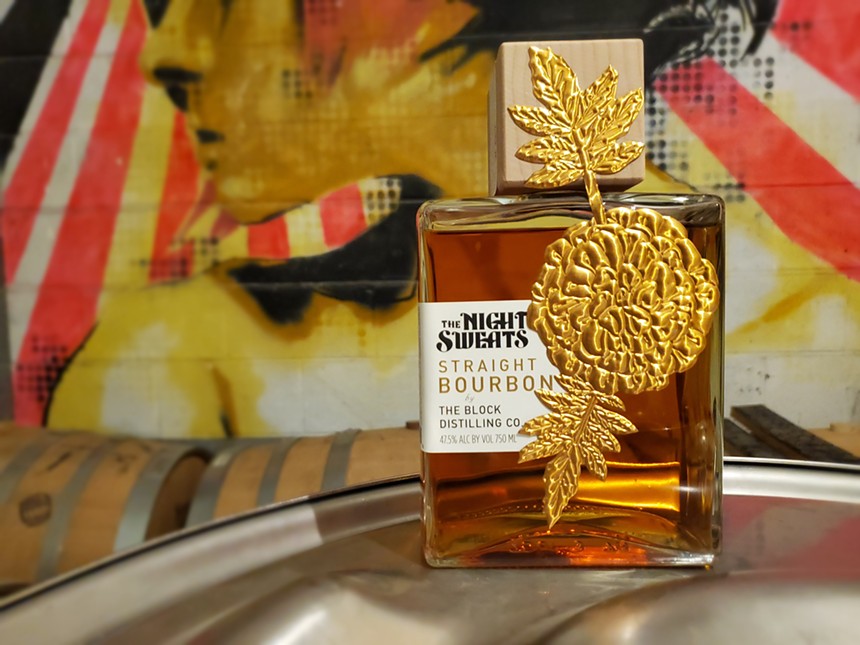 Night Sweats Bourbon was first released in 2021.
Molly Martin
Local tattoo artists will be offering flash tattoos, and baked goods from Black & Delicate and Circle Pies will be available to take home; there's an additional cost for both. Ticket-holders will also have the opportunity to purchase a bottle of Night Sweats Bourbon autographed by Nathaniel Rateliff and the Night Sweats. Additional non-autographed bottles will be available to the public on the day of the event — $10 from each sold goes directly to the Marigold Project.

All proceeds from the event itself will go to two nonprofits working to provide access to reproductive health care: the Colorado Doula Project and Color Latina.

"We've made some great strides in terms of Governor Jared Polis's declaration to protect people seeking an abortion in Colorado," Nott concludes. "But we've still got a lot of work to do to make sure we have the infrastructure to support those not only in Colorado, but now coming in from other states to access abortion."
KEEP WESTWORD FREE... Since we started Westword, it has been defined as the free, independent voice of Denver, and we'd like to keep it that way. With local media under siege, it's more important than ever for us to rally support behind funding our local journalism. You can help by participating in our "I Support" program, allowing us to keep offering readers access to our incisive coverage of local news, food and culture with no paywalls.
Make a one-time donation today for as little as $1.