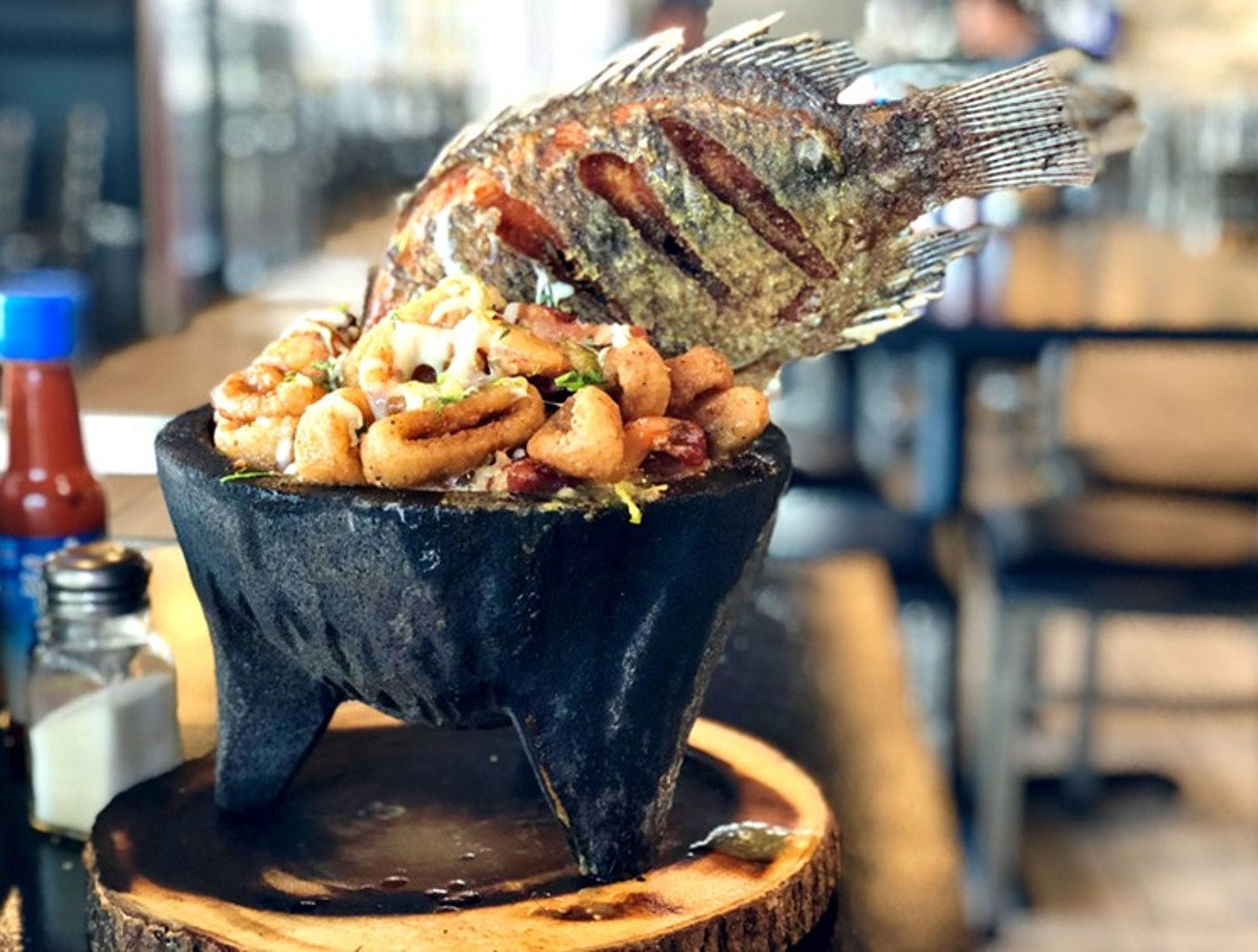 Lucky China's beef noodle soup with housemade noodles.
Maureen Witten
Taiwan Style Beef Noodle Soup at Lucky China
2000 South Havana Street, Aurora
303-745-1373
Long before many have hit the morning snooze button, Lucky China owner Helen Cai and her staff are already busy in the kitchen braising hand-selected cuts of beef in rich bone broth flavored with bits of garlic, ginger, soy sauce and other secret seasonings that will become the savory Taiwan style beef noodle soup dish you’ll be joyously inhaling for lunch or dinner later that day. Served up to patrons six hours after it got its start, the meaty elixir has that slow-cooked taste that can’t be forged. With a flick of your spoon, tender pieces of beef release from the bone to float among bok choy and other veggies and long swirls of delicate handmade noodles cooked to the perfect “Q” texture, a Chinese term that means chewy, springy and slightly firm. Cai, who has been making versions of this laborious dish since she was a teenager in Taiwan, has been cooking up the meaty repast alongside her kitchen staff at Lucky China since 2013. When you come for the steaming soup, bring Cai and her staff a strong cup of coffee to give them energy to keep making this distinctively tasty entree all the way into dinnertime.

Would you take this cinnamon roll on vacation with you? The airlines will probably charge a baggage-handling fee.
Maureen Witten
Cinnamon Rolls at Dozens
2180 South Havana Street, Aurora
303-337-6627
The question isn’t “How far would you go for a cinnamon roll?” It’s "How far would you go with a cinnamon roll?” At Dozens, the breakfast and lunch eatery on South Havana Street in Aurora, the answer for many customers is “around the world." Dozens started its Cinnamon Roll Challenge in the 1980s, after a regular customer took a picture of himself traveling with one because he loved the restaurant's cinnamon rolls so much. Dozens put the photo on the dining room wall, and other customers began bringing in their photos of memorable moments palming the cinnamon roll, too— and so the challenge was born. Among the photos (such as a bride clutching one on her wedding day), one snapshot that stands out is of two women with the confection in Australia, with the Sydney opera house behind them. Directly beneath it, there's a picture of the two women's daughters in the same location, holding up a Dozens cinnamon roll — twenty years later. The jet-setting pastry is about the size of a quarter-pounder and comes with a large dollop of melting butter where frosting traditionally sits. Your first forkful causes a waterfall of molten butter that seeps into every nook and cranny of the roll. Swirls of cinnamon are evenly distributed throughout, ensuring a flavorful bite from start to finish. It’s no wonder people smuggle these sweet snacks in their carry-ons.

A nopal taco and a gordita at Taqueria Corona.
Maureen Witten
Gorditas at Taqueria Corona
2222 South Havana Street, Aurora
303-755-1034
Born of modest beginnings as a taco stand at the corner of Mississippi Avenue and Peoria Street ten years ago, Taqueria Corona is now a full-service restaurant, wedged inconspicuously between a hookah cafe and sushi bar. You might almost miss the little eatery if you aren’t paying attention. The stand is long gone, but Corona still uses the same family recipes that put the "home" in home-cooked Mexican food. You’ll feel like family as you put in your order with one of the members of the Corona family, who came to Colorado from Guanajuato, Mexico, twenty years ago. Of the many specialties is a rendition of the gordita, a popular street snack filled to bursting with your choice of tender marinated meats or nopales. After the fluffy handmade masa shell is stuffed with meat or cactus, it's further filled with lettuce, tomato, ample crumbles of queso fresco (for an extra .25 cents) and a dollop of crema. One bite of the portly delicacy will have you belting a grito for a second (or third) helping.

A whole fried fish comes with the molcajete tiburón.
Maureen Witten
The Molcajete Tiburón at Mariscos El Licenciado
10600 East Iliff Avenue, Aurora
720-638-1645
Mariscos El Licenciado is the perfect place to dive head first into Sinoloan seafood, with the molcajete tiburón at the top of the list of many intriguing entrees. A smoldering stone bowl is filled with octopus, bacon-wrapped shrimp, fried calamari, fried chunks of tilapia and a scary-looking fish: a whole fried mojarra — spines, head and all — that hangs off the rim of the bowl like a giant lime wedge, wearing a thin cornmeal coating. The dish comes out on a wooden lazy Susan scorched from the heat of the stone; bubbling cheese and salsa verde create a symphony of sizzle and pop that continues to percolate long after it arrives at your table. Watch for bones as you dig up bits of fish, then pop that tender meat straight into your mouth or place it on a warm corn tortilla with some beans and rice. The calamari rings are coated in an addictive cornmeal crust similar to a garlic hush puppy, the shrimp are stuffed with cheese, and the tender octopus, swimming in salsa and butter, absorbs flavor from bits of garlic and green chiles in the mix. After excavating the contents of the molcajete, you might find yourself guiltily nibbling on pieces of crusty cheese baked onto the hot stone. If so, rest assured that you're not the only one.

Butter chicken and fresh-baked naan at Chutney.
Maureen Witten
Butter Chicken at Chutney
2740 South Havana Street, Aurora
720-644-6677
For the price you would pay for a lifeless salad at most sit-down restaurants, Aurora newcomer Chutney serves up outright decadence in a relaxed cafeteria-style eatery. Among the variety of Indian and Nepalese street foods served here is the charming butter chicken, with large pieces of delicate meat soaked in a hot bath of buttery tomato gravy and served with a side of fragrant basmati rice. An accompaniment of housemade, lightly charred naan also comes in handy for mopping up any creamy tomato goodness left in your Styrofoam bowl. With fifteen years of experience cooking in and running Indian restaurants in the Denver area, Chutney owner Ashim Chettri focuses on serving quality street foods traditional in Indian markets and food carts — chaats, momos and palak paneer among them. If you’re looking for a new taste experience without the fuss of a traditional sit-down restaurant or want to grab something quick that's a little more adventurous than the standard takeout options, the butter chicken is definitely worth stopping for.