No Taproom? No Problem for TRVE and Black Project

Things aren't as dark as they seem at TRVE Brewing. TRVE Brewing
When TRVE Brewing owner Nick Nunns signed the lease on his spot on Broadway in 2012, it suited him well. Narrow and deep, the former art gallery was dark and mysterious, just like the brewery’s logo, its music and its ethos. The space also lent itself well to the goat’s-head altar behind the bar and the forty-foot-long community table that still serves as its centerpiece.

But in 2020, small, enclosed spaces and community tables are the mark of a different kind of beast: COVID-19, which has forced bars, breweries and restaurants to dramatically cut capacity and to set up new or makeshift patios in any outdoor space they can nab. Despite the restrictions, most of Colorado’s 400-plus breweries have been able to reopen.

That strategy isn’t going to work for TRVE, though, which doesn’t have room for a patio or socially distanced tables. It doesn’t work for sour specialist Black Project Wild & Spontaneous Ales, either, which is only about a mile south of TRVE on South Broadway. But so far, neither brewery has needed taproom sales. 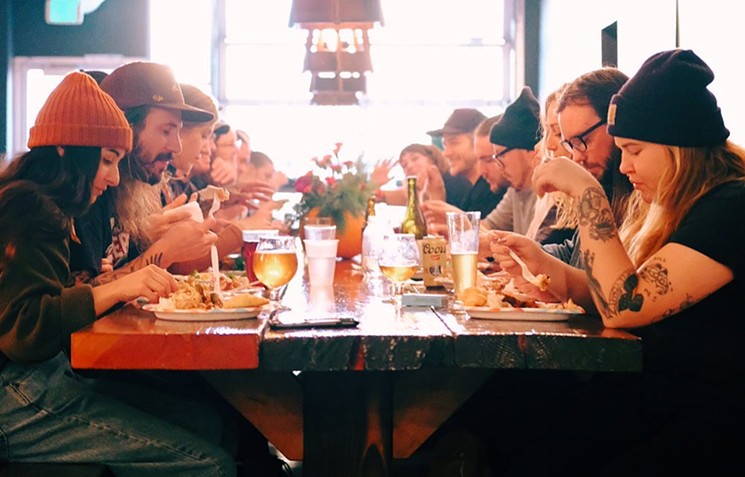 The community table at TRVE isn't going to work in a pandemic.
TRVE Brewing
“Our team has been working tirelessly to keep up with the demand y’all have had for our cans, putting out just as much beer as before the shit hit the fan,” Nunns wrote on Facebook last week. “Our bartenders have been patiently waiting, shopkeeping at our taproom, biding time until they can pull a draught for y’all.”

In fact, TRVE, which brews and packages all of its beer, including sours, saisons and lagers, at an off-site warehouse nearby, didn’t have to lay off a single person through the pandemic. Instead, the brewery has been making money by selling beer to go, via delivery (which the state made temporarily available to breweries) and through distribution to liquor stores.

The chairs are empty, but the bottles are full at Black Project.
Black Project
At Black Project, owner James Howat has also been able to make ends meet by selling and distributing his beers in bottles and cans. “We are in a pretty good place, financially,” he says. “In fact, we are prepared to take taproom revenue out of the picture indefinitely.”

Since his staff is small, Howat says he didn’t want to risk their safety by opening the doors to on-premises drinking. Not only that, but the taproom would have only been able to host about fifteen people at a time, including beertenders, under the state’s reopening guidelines.

“Would it be a better decision to throw open the doors? Maybe. Two or three years ago, we would have had to be open as well,” Howat adds, explaining that margins are higher pouring beer in the taproom than with distribution. But since Black Project has expanded into other states, he now has enough of a revenue stream to make it work. “I feel for those who don’t have other sources of revenue, because it would suck.”

At the moment, neither brewery has immediate plans to reopen to on-site drinking, though both are selling beer to go. TRVE has hinted that it may have a plan in the works, but with no time frame, Black Project’s Howat says he will re-evaluate every couple of months.
KEEP WESTWORD FREE... Since we started Westword, it has been defined as the free, independent voice of Denver, and we'd like to keep it that way. With local media under siege, it's more important than ever for us to rally support behind funding our local journalism. You can help by participating in our "I Support" program, allowing us to keep offering readers access to our incisive coverage of local news, food and culture with no paywalls.
Make a one-time donation today for as little as $1.