Belly up to the bar at My Brother's for a sweet treat. Westword
My Brother's Bar has never had a marquee indicating that there's a saloon inside the old building at 2376 15th Street, but at this time of year it always sports a sign: Girl Scout Cookie Station. The tradition started more than forty years ago, shortly after the Karagas brothers bought the structure that has held a bar since the 1880s, and turned it into My Brother's in 1970.

From the start, My Brother's has been a family affair. Soon after the bar opened, Jim Karagas, who oversaw My Brother's (brother Angelo was in charge of the just-closed Wazee Lounge and Supper Club, which the brothers bought in 1974), sold 100 boxes of Girl Scout cookies for his then-eight-year-old daughter. The project grew from there, until the bar was selling tens of thousands of boxes every year.

And the tradition is continuing, even though My Brother's changed hands right before the start of Girl Scout cookie season last winter. 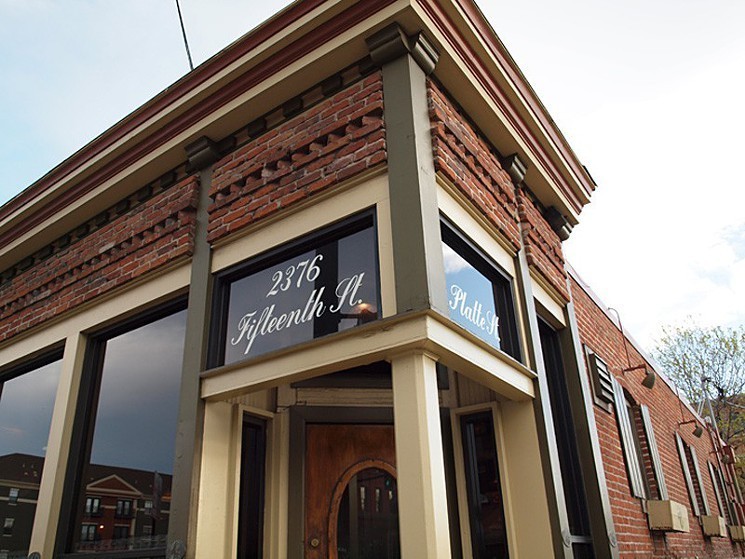 No signs needed.
Westword
Denver native and entrepreneur Danny Newman bought the building and business with his family; his mother, Paula Newman, has worked at My Brother's for more than three decades. They promised to keep the place running as a bar (rather than turn it into a big hole in the ground that will soon be filled with a giant building, as just happened across the street at the Natural Foods site). So it only made sense to keep the cookie tradition, too.

"Last year, we were maybe two, three weeks into ownership," Newman remembers. "This year, we knew we could step it up a little bit."

And this year, Girl Scouts started calling My Brother's as soon as the cases of cookies came in. The big buy day was February 10, when the bar stools were filled with Scouts peddling their wares to management (before My Brother's opened for other kinds of business). "Jim was buying tens of thousands of boxes," Newman says. "We're just into the thousands." The second floor disappeared decades ago, but the stairs are still good for cookie storage.
Westword
But that business could grow. One night this week, Newman says, "I went home and had some Thin Mints, ice cream and Baileys." The combination was so good, he's thinking about offering some cookie and cocktail pairings, as other bars have done (Renegade has a pairing event starting February 22). "We'll have to come up with something funny and relevant," he promises.

In the meantime, you can grab a couple of boxes of cookies whenever you stop in My Brother's to grab a beer. The staircase at the center of the bar — which once led to a second floor that disappeared decades ago — is stuffed with boxes.

Notes Newman: "This is probably the only place to get Girl Scout cookies at 1:30 in the morning."