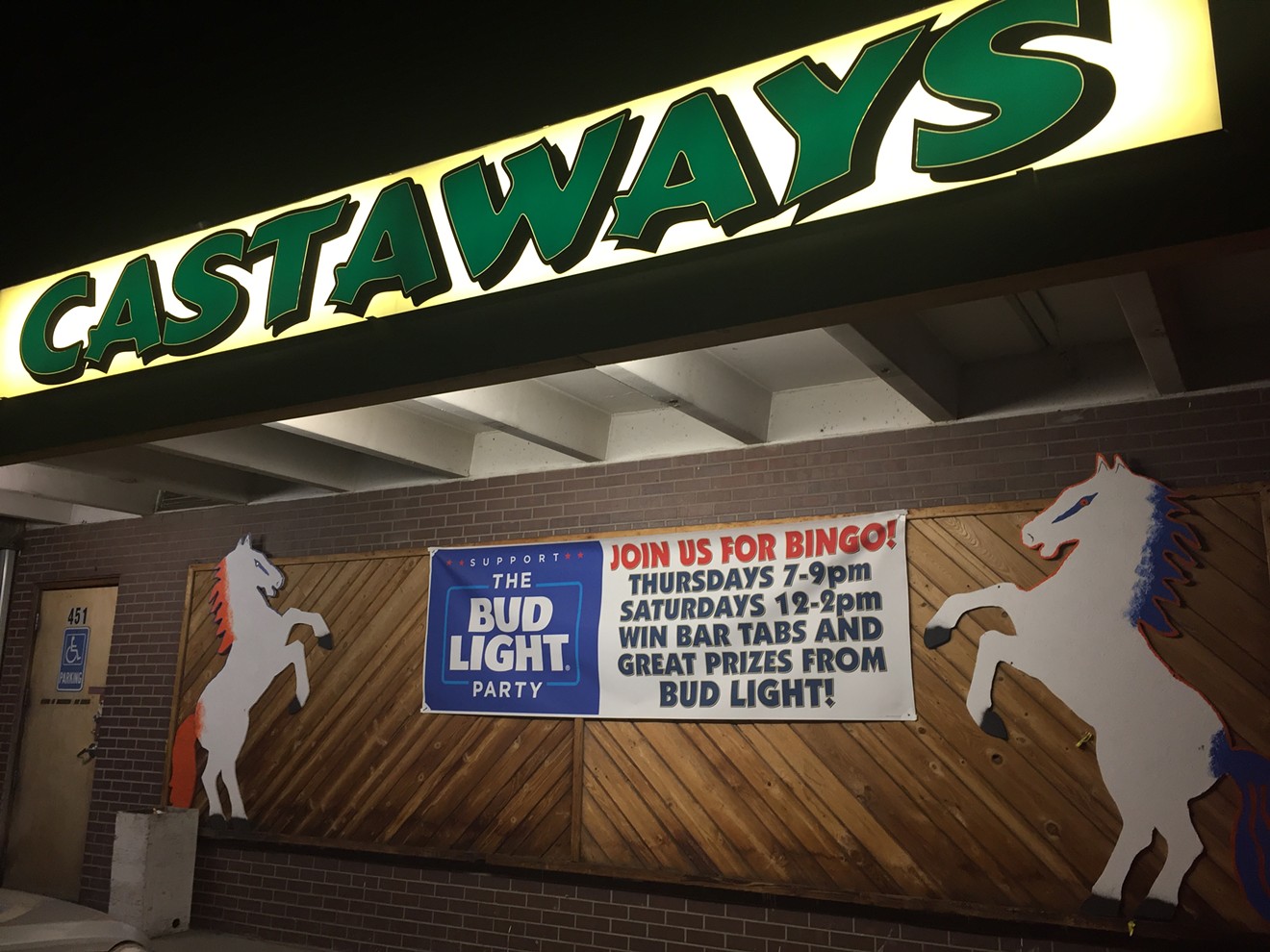 Castaways Lounge in Thornton mixes a nautical/beach theme with the theme of every Denver-area bar — the Broncos. Susie Lewis
Last weekend, I went from doing perhaps the most hipster thing to the least hipster thing a person could do in metro Denver in one night. The most hipster thing was attending opening night of Divisions, the collaboration between Denver hip-hop act the Flobots and local ballet company Wonderbound. Wonderbound is known for partnering up with various Denver bands to build edgy ballet performances built around their music.

After the show, a couple of friends and I embarked on a quest for what ended up being a very un-hipster thing, checking out one of the fine neighborhood bars of Thornton. My friends agreed to help me find a neighborhood bar to explore close to the school where the performance took place. After Google-searching like true natives — one of my companions is actually from Denver but has little knowledge of Thornton — we decided on a bar called Castaways Lounge. We didn't know what to expect, so we agreed to drive by and see if it looked interesting, and find another place if it didn't. When we entered the parking lot on 84th Avenue, just a few blocks from the I-25 exit ramp, two huge plywood cutouts of rearing broncos beckoned us into the bar. To go along with the bronco cutouts, a large sign that simply reads "Castaways," with a couple images of tiki masks for good measure, presided over the awning of the building.

This tropical-decor-meets-Denver-sports-memorabilia theme was on even more obvious display inside the bar. Upon heading in, we walked past a DJ spinning tracks over a still-empty dance floor, complete with strobe lights and the hip-hop stylings of Montell Jordan. Really, there was no reason for such a fine dance floor to be empty, except that maybe it was still a bit early for the Friday-night crowd to really get going. A few smaller groups of guys and girls were playing pool, and several clusters of patrons wearing Rockies and Broncos gear sat along the ample bar, which made a full rectangular pen enclosing the three bartenders.The crowd was on the older side, with most of the patrons looking to be in their forties. One of the bartenders was wearing a Fireball promotional shirt that read "I See You, I'm Just Ignoring You," which pretty much fit what was going on. The Castaways crowd could obviously tell we were not regulars, and so could the bartenders, and aside from bringing us some frosty $2 Bud Lights, they kept their distance until I started asking more about the bar. 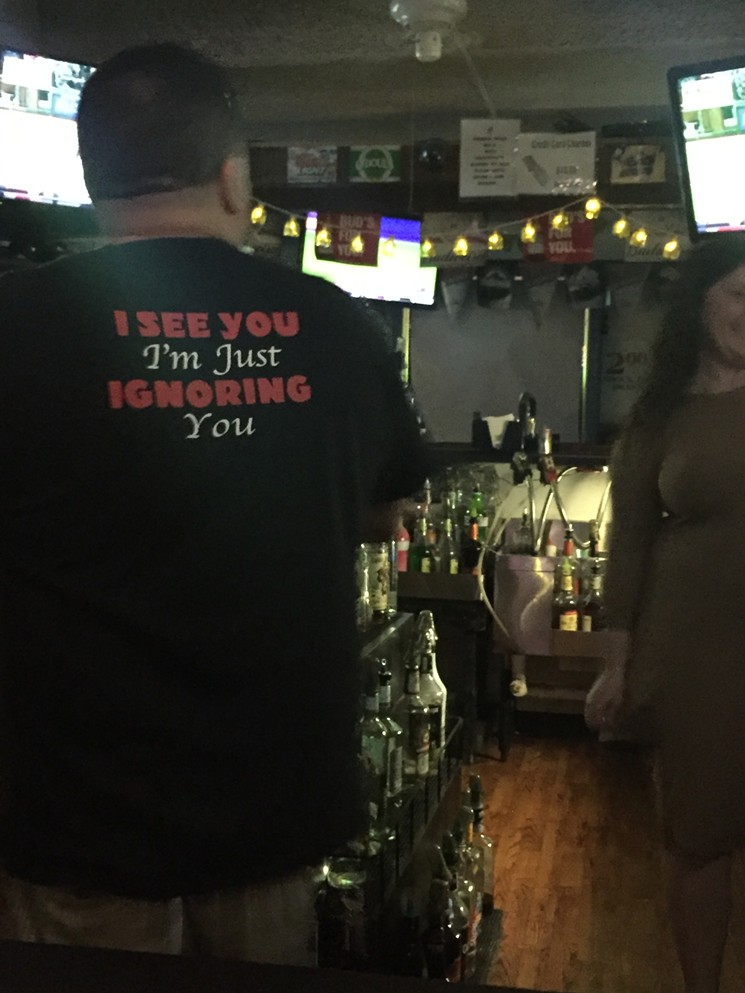 This guy was living up to his shirt.
Susie Lewis
At that point, the friendly female bartender, who was not wearing a shirt about ignoring people, told us all about the intense amount of specials, weekly events and prizes offered by the crew at Castaways. Owner Troy Martinez bought the bar two years ago, but the business has been known as Castaways since 2005, and no one, not even the all-knowing Internet, seemed to know what it was before that. But Martinez and his staff have made some serious upgrades and have even more in the works. Despite the already crazy-cheap drink prices, specials abound. Friday and Saturday are ladies' nights, with $1 wells and $1.75 domestic draws, which is a term I have learned because it seems to be what they call draft beers everywhere in the northern suburbs of Denver. Tuesdays see two-for-one wells all day, and happy hour goes down three times every day: from 8 a.m. to noon, 5 to 7 p.m., and 10 p.m. to midnight. Once a month the bar brings in live bands, and DJs preside over every ladies' night. Thursdays are bingo night, with prizes and drink specials to match.

The real prizes come during Broncos games, when Martinez and company give away a Las Vegas weekend trip for two, including a $500 casino credit. And for the AFC Championship and the Super Bowl, the bar is the place to be to win a trip to Cancún, regardless of whether the Broncos are playing or not. Everyone who comes to the bar at each game gets a raffle ticket, along with additional tickets for purchasing top-shelf drinks. That type of travel giveaway is definitely something I haven't seen much in my bar wanderings. According to our bartender, Castaways worked with a travel agency to get an exclusive deal on multiple trips, so apparently travel agencies do still exist, and Castaways is keeping at least one of them in business. Aside from these new perks that Martinez has introduced, he also has plans for major remodeling and adding a patio outside over the next couple of months.

As my friends and I enjoyed our beers and scoped out the ambience, I reflected on the degree to which the crowd in this place was different from the crowd at the event my friends and I had just left. I sensed that the patrons of this Thornton spot probably weren't big fans of hip-hop ballet. The main entertainment at Castaways, aside from the continuous ’90s jams coming from the DJ's speakers in the corner and the aforementioned pool tables, seemed to be Golden Tee video golf, Pirates of the Caribbean pinball, foosball and darts. The place even had the classic dive-bar game Bonus Hole; this one was a knock-off version called "Jackpot Hole," but the idea of being able to win quarters and cigarette lighters by spending quarters was the same. It was a pretty robust selection of bar entertainment, especially for a bar that's not huge in terms of square footage. 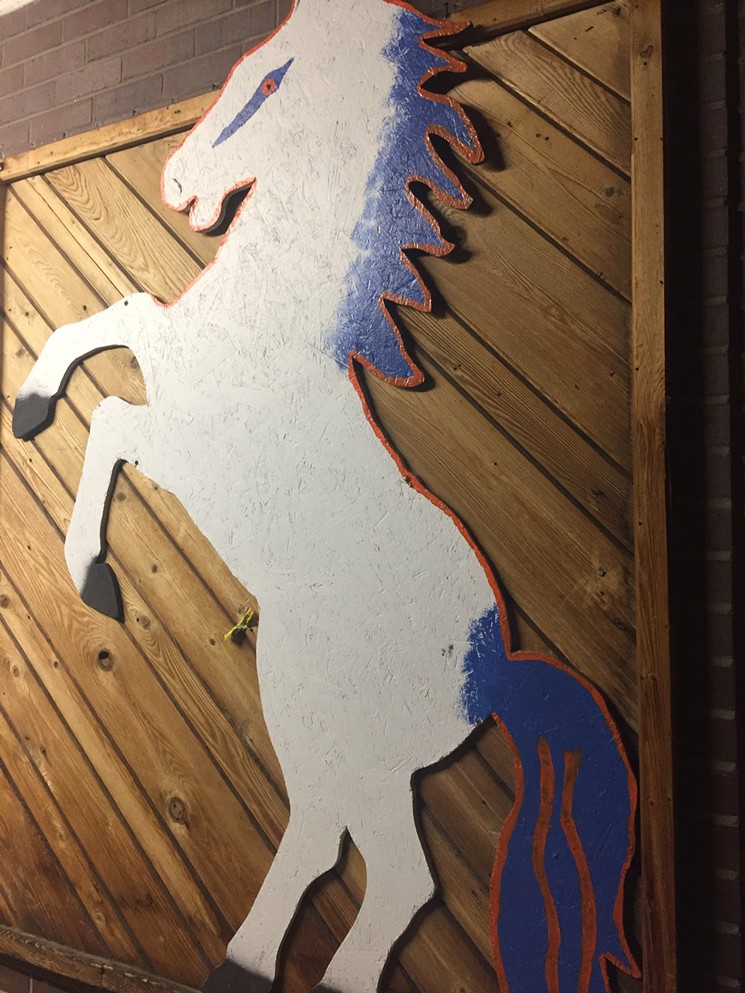 This is the kind of Broncos-related public art I can get behind. The "Blucifer" blue bronco statue by DIA freaks me out, but these broncos seem much more friendly and, to my knowledge, have never killed a man.
Susie Lewis
After a couple of beers, some discussion about the Wonderbound show and also about Tinder (because that's what I talk about in my life these days), my friends and I headed back down I-25 to more familiar territory — but not without first pausing to take a few more pictures of the oddly compelling bronco plywood cutouts. Next time I'm in Thornton, I know just the place if I'm in need of some dollar ladies' night drinks, or a free Vegas vacation.