Short Stop: The Kitchen Is Back Open at Pete's Satire Lounge

You can dine al fresco at the Satire now. Molly Martin
Denver's dining scene is making a big comeback — and we're hungering to go out. With so many new ventures and old favorites to visit after more than two years of shutdowns and restrictions, the choices can be overwhelming. So we're serving up Short Stop, with recommendations for things that should definitely be on your culinary short list. This week, head to Pete's Satire Lounge, where the kitchen recently reopened after a pandemic hiatus. 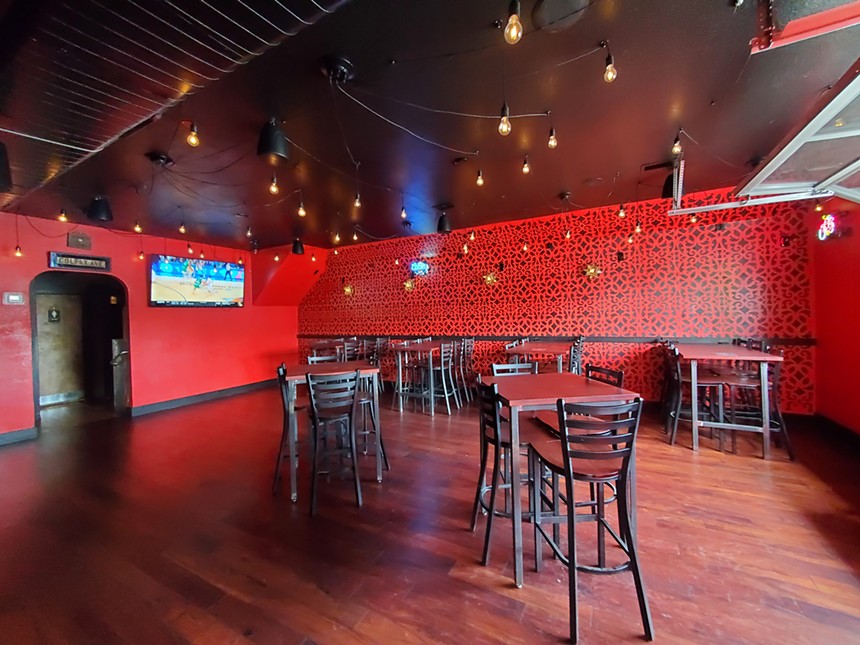 The Satire has a new look.
Molly Martin
About the place: Pete's Satire Lounge and Pete's Kitchen next door are old-school cool, especially now, with so many Denver classics like Annie's Cafe and Bonnie Brae Tavern set to close by the end of the month. Although the founder of Pete's Restaurants, Pete Contos, passed away at age 85 in May 2019, his legacy lives on — thanks in large part to his grandson Alex Barakos, who has taken the reins at the Satire (Contos bought the place sixty years ago, starting his empire) and given the place some updates.

In April, the Satire celebrated with a grand reopening party. The space has been opened up, with a fresh coat of red paint and a new game room that leads to a large outdoor area. Part of the new decor is a glowing neon sign with longtime employee Joey Mestas's catchphrase, "Plates are hot, have a nice time...." But when the bar reopened, there were no plates.

The Satire had shut down its kitchen when the pandemic hit, and while Pete's Kitchen reopened — and even added back 24-hour service on weekends last June — it's been booze-only over at the Satire ever since. Until now.

On June 8, Barakos brought food back to the bar, so I stopped in for a taste of the new eats at this longtime go-to. 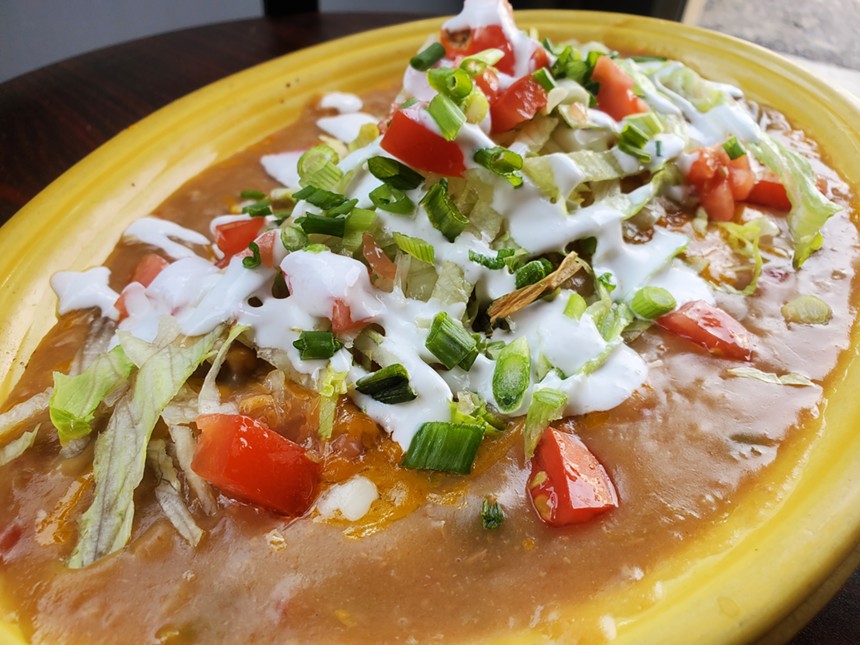 Joey's Famous Smothered Burrito at the Satire.
Molly Martin
What you're eating: I don't think I'd ever been into the Satire in the daylight before. On a recent warm, sunny day, I headed over with a group of friends right after the place opened at 5 p.m. After putting in an order at the bar, we gathered in the new game room to play shuffleboard. The door to the outside patio was open, and the combination of the newly remodeled (but not so much that it had lost its character) space, fresh air and sunshine had everyone excited to dig into the food as we downed cheap cocktails.

The menu is concise, with three starters, four mains and four "Mexican specialties." While items like Joey's Famous Smothered Burrito ($14) and the classic enchilada plate ($12) are throwbacks to the old menu, Barakos says that everything got at least a few tweaks aimed at improving the quality. 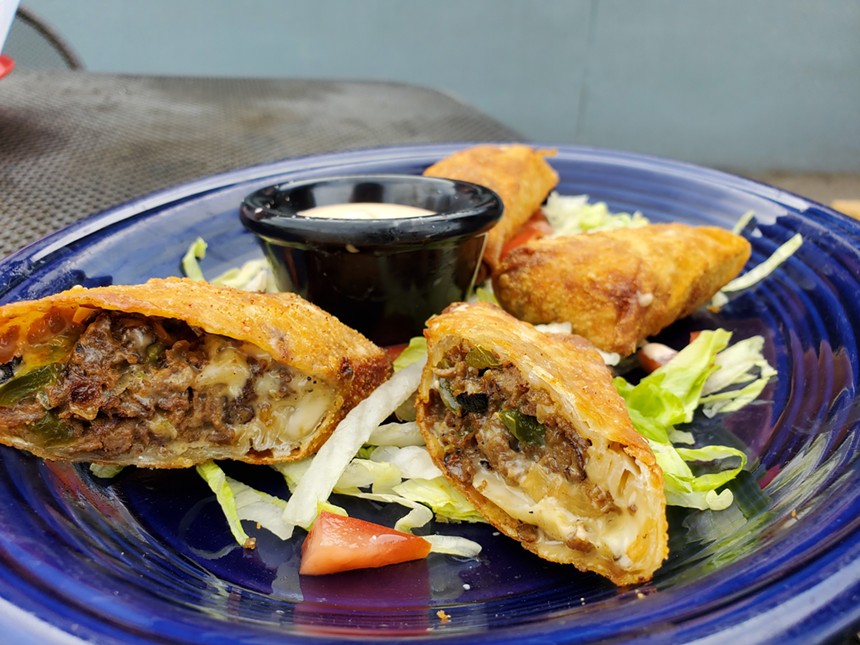 We started with a completely new addition, the Philly cheese steak rolls ($8, four pieces). Reminiscent of the Southwest-style fried egg rolls often found at chain restaurants but stuffed instead with thinly sliced steak and plenty of cheese, they're a smart starter or snack while you're imbibing.

At $10, the classic cheeseburger is a better pick if you're looking for something more substantial, and it comes with a side of thin and crispy fries. The pastrami Reuben was the standout, though. It's a solid sandwich for $12, also served with fries, and with all the classic Reuben elements accounted for and executed with the expertise you'd expect from a place whose younger sibling next door has been serving up diner classics since 1988.

We may have been a little overzealous in ordering, because by the time we dug into the burrito, stuffed with ground beef and beans and smothered in thick, gravy-like green chile, we were hardly able to make a dent. But I kept going back for bites anyway, because it's hard to resist this kind of comfort food.

Like the Satire itself, the food might have gotten a revamp, but it's as familiar, low-key and satisfying as ever. And we wouldn't want it any other way.
KEEP WESTWORD FREE... Since we started Westword, it has been defined as the free, independent voice of Denver, and we'd like to keep it that way. With local media under siege, it's more important than ever for us to rally support behind funding our local journalism. You can help by participating in our "I Support" program, allowing us to keep offering readers access to our incisive coverage of local news, food and culture with no paywalls.
Make a one-time donation today for as little as $1.