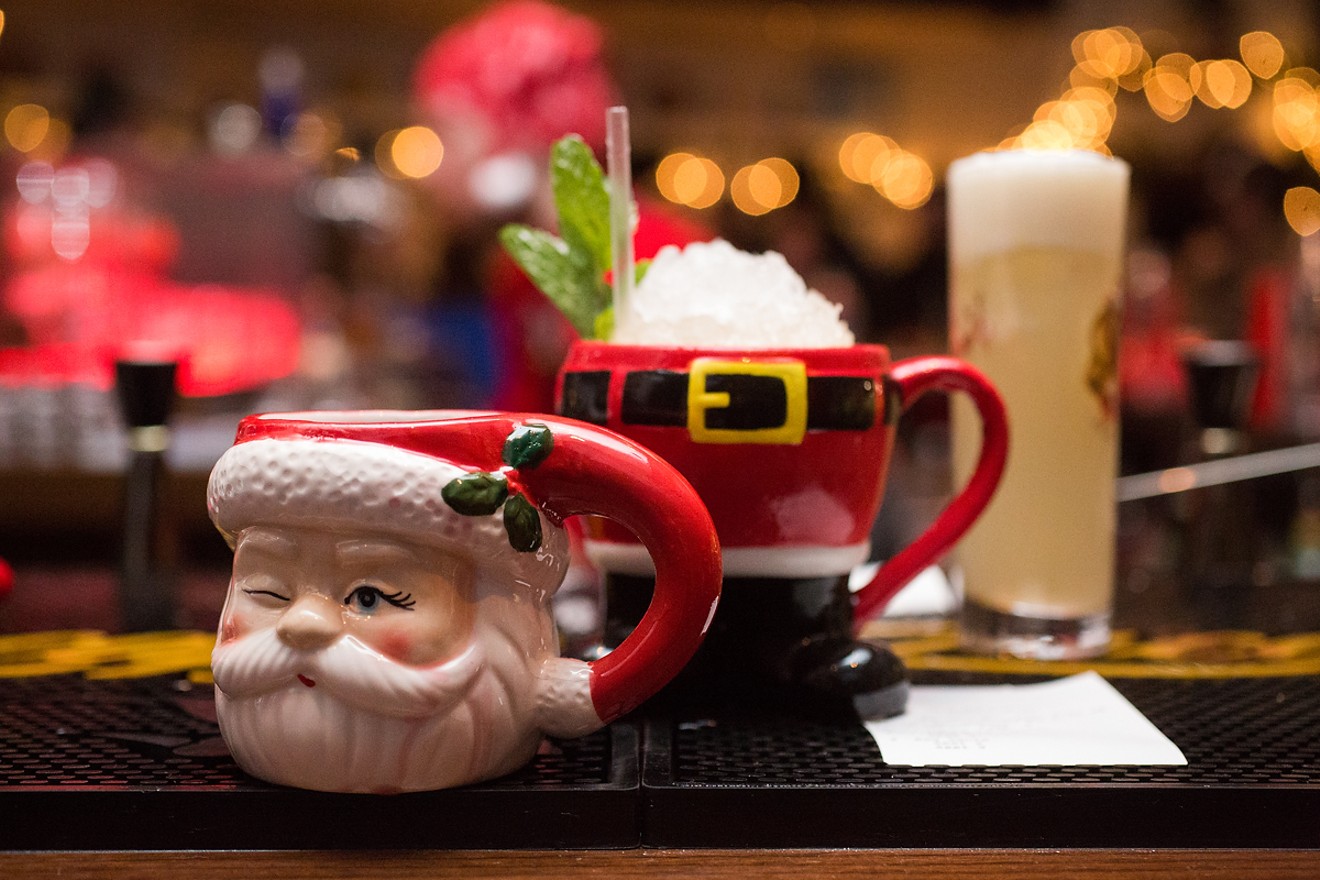 Miracle on Little Raven is an immersive Christmas-themed pop-up bar with tasty holiday cocktails. Danielle Lirette
Christmas Eve might just be the happiest night of the year. Presents are bought (right?), stockings are stuffed (they are, aren't they?!), and everyone is of good cheer (provided that steps one and two have been taken care of). So it's the perfect time to take a break from the constant holiday frenzy and enjoy a delicious and leisurely dinner with family and friends. Here are ten places to eat (and drink) on Christmas Eve, with a couple of extras that have you covered on Christmas Day, too, just in case you've just been too busy to make it happen at home.

Celebrate Christmas Eve French-style at Atelier.
Mark Antonation
Atelier by Radex
2011 East 17th Street
720-379-5556
Radek Cerny's most recent restaurant (underrated, in our opinion) is rolling out the red carpet on Christmas Eve and Christmas Day. From 4 to 9 p.m., the not-quite-French eatery will be serving what the website calls an "extensive menu" — which might be the understatement of the year. This isn't a prix fixe plate; you'll be able to choose your own dining adventure from a luscious list of apps and entrees, including beef tartare, escargot with Gorgonzola and blackened bread, Thai-spiced tuna with pickled ginger, a classic bouillabaisse, veal scallopini with fresh herbs and Fontina, the chef's clever lobster TV dinner and more. Call the restaurant to secure your seat.

Centro Mexican Kitchen
950 Pearl Street, Boulder
303-442-7771
It's safe to say that anything bottomless is good news this time of the year: Santa's sack, brunch and mimosas, reservoirs of family dysfunction (hey, it makes for a good story after the fact). Take advantage of the second at Centro's ¡Feliz Navidad! brunch on Sunday, December 24. Get there early (service starts at 9:30 a.m) to fully appreciate the excess that is bottomless brunch: eight types of mimosas; coconut-fried bananas with crème anglaise; cheddar and green chile biscuits and gravy; and carnitas Benedict are just some of the brunchy delights on the menu. The whole shebang will run you $45 ($30 for a boozeless brunch). Call Centro to make your reservation and bypass the horde of un-reserved revelers clamoring for a seat at the bar.

Coperta
400 East 20th Avenue
720-749-4666
The Feast of the Seven Fishes has become more familiar as an Italian Christmas Eve tradition over the last decade, even if its precise origins are unclear. Is it southern Italian? Northern Italian? Italian-American? Catholic? Baptist? Who knows? But what we do know is that epic seafood spreads are popping up on Christmas Eve menus around town like the Elf on the Shelf pops up every night to coerce kids into finishing their veggies. Coperta is getting in on the Seven Fishes action early; its kitchen will be turning out the feast starting on Monday, December 18, and running through December 24. For $55, diners will get seven seafood dishes in the restaurant's southern Italian style; wine pairings will be available for an additional $25. So get your friends and family together and take advantage of this Roman holiday by calling Coperta for a table; reservations start at 5 p.m. nightly.

Santa Claus is going to great lengths to escape from rogue reindeer this year. Be sure to reassure your kids that Saint Nick is SCUBA-certified and not drowning.
Courtesy of Denver Downtown Aquarium
Downtown Aquarium
700 Water Street
303-561-4450
The odd and occasionally unholy combination of marine-life education and seafood restaurant that is the Downtown Aquarium is hosting Breakfast With Santa at 8:30 a.m. Friday, December 22, through Sunday, December 24. Pack up the kids and tote them down to 700 Water Street for a breakfast buffet and the chance to smile and wave at a scuba-diving Santa Claus. Breakfast is a whopping $18.99 for adults (just $12.99 for children), but it comes with free parking (worth its weight in gold) and all-you-can-eat fried mermaid tails. Call the aquarium for your reservation.

Chowder Room
560 South Broadway
303-777-3474
The most comfortable seafood joint in town, Chowder Room, is cooking up its Feast of the Seven Fishes on Saturday, December 23, and Sunday, December 24, and it promises to be as homey, delicious and soul-satisfying as a holiday dinner at Grandma's house (but without Uncle Todd, that jerk. Also, you won't have to sneak out to the garage for beer). Join the family — or create one of your own without the emotional baggage — from 5 to 9 p.m. on Saturday or 4:30 to 8:30 p.m. on Christmas Eve; the sumptuous spread is a steal at $59. Call the restaurant to secure your spot.

Have a seat at Beast + Bottle for a game of Duck, Duck, Goose on Christmas Eve.
Danielle Lirette
Beast + Bottle
719 East 17th Avenue
303-623-3223
If seafood isn't your thing, Beast + Bottle has your back on Christmas Eve. Starting at 5 p.m., fair is fowl and fowl is fair at the eatery's Duck the Halls dinner, where diners will indulge in duck three ways (honey-lacquered breast, duck-liver mousse and confit duck legs), sample three succulent side dishes, and even quack open a bottle of wine, all for $121 per couple. The dining room fills up quickly, so you'll want to pullet together and call 303-623-3223 for reservations ASAP; the cutoff to book your table is Thursday, December 21.

Any night at Il Posto is a celebration.
Danielle Lirette
Il Posto
2601 Larimer Street
303-394-0100
Il Posto moved into bigger and better digs earlier this year, and the beloved Italian restaurant is taking advantage of its sparkling, shimmering new building to expand its annual Feast of the Seven Fishes dinner. On Sunday, December 24, chef Andrea Frizzi will prepare nine — count ’em, nine — seafood dishes in the sexiest and swankiest space in town for $110 per person. Reservations for the night begin at 5 p.m., and if you're lucky enough to nab that second-floor table overlooking downtown (the best seat in the city, hands down), you'd have to be a real Grinch not to admit it's worth every penne. Call the restaurant for reservations.

Get cozy for Christmas Eve at Lola.
Scott Lentz
Lola Coastal Mexican
1575 Boulder Street
720-570-8686
If Italian tradition, shlocky Santas or a game of Duck, Duck, Goose aren't the right fit for your Christmas Eve, try Lola Coastal Mexican's lighter and more eclectic dinner. From 5 to 9 p.m., the south-of-the-border fish house will be serving a family-style dinner for just $16 per person: Caesar salad, Mexican paella, milk and cookies, half-price bottles of wine, and Mexican egg nog specials. Because after all, isn't gathering with friends and family over the obligatory salad in an attempt to compensate for weeks of overeating and the preponderance of carbs, comfort food and cheap booze what the holidays are all about? We thought so. Don't miss out on the true spirit of Christmas Eve — call Lola to book your dinner.

The DIY Bloody Mary bar at Punch Bowl Social.
Amber Boutwell, Punch Bowl Social
Punch Bowl Social
65 Broadway
3120 Uinta Street
303-765-2695
Christmas Eve falls on Sunday this year, and what does every self-respecting Denverite do on Sunday? That's right: brunch. (Is it a verb or a noun? It's the holiday season; as our gift to you, we won't judge you harshly for your answer.) This year, Punch Bowl Social has two locations to help make your holiday merry and bright: Both the original on Broadway and the gorgeous Stapleton outpost are ready and waiting for you to come by between 8 a.m. and 3 p.m., order a special holiday punch and indulge in some better-than-homestyle brunch fare. Reservations aren't required, but they are encouraged, because there's never enough $11 avocado toast to go around.

It's all Christmas, all the time at Miracle on Little Raven.
Danielle Lirette
Miracle on Little Raven at Wayward
1610 Little Raven Street
720-449-8300
After eating Twelve Days of Calories on Christmas Eve, you'll need a digestif to settle your stomach and fortify yourself for the night of wrapping presents, stomping around on the roof like Rudolph and baking cookies for Santa. Drop in to Miracle on Little Raven for the Christmas-themed pop-up bar's final night of operation. Down a Muletide (mezcal, allspice, sherry, ginger, lemon), or perhaps a Yippee Ki Yay Mother F****r! (rum, cachaca, more rum, orgeat, pineapple) if all that holiday cheer has awakened your homicidal urges. Doors open at 6 p.m., and with a two-hour wait and no reservations, we suggest you get there early.

Panzano
909 174th Street
303-296-3525
The end is nigh: Nation is rising against nation, earthquakes are rampant, and now, for the first time in its history, Panzano is serving Christmas Day dinner. From 2:30 to 9 p.m., the granddaddy of Denver's hotel restaurant scene will be serving its regular (but definitely not ordinary) dinner menu; among the Northern Italian dishes on offer are red wine risotto, rabbit cacciatore, bison short rib with rosemary and sage polenta, and the best Brussels sprouts in town. Diners will also leave with a surprise treat at the end of their meal — Panzano's very own stocking stuffer to you. There's no better way to celebrate the Apocalypse (er...Christmas).