Seven Trendy Beer Styles That Are Catching On, and One That Isn’t

That's a beer? Wiley Roots
New England-style IPAs have achieved recognition by the Brewers Association as an official style; pastry stouts are commonplace; and glitter beer — well, that is just so "last week." So what's new when it comes to fads, trends and burgeoning craft-beer styles? New ideas by the barrel, it seems. Some of the following examples are simple summer fun or experiments, while others are riffs on existing beers. A few are serious contenders as legitimate stand-alone styles. But all of them show the creativity of local craft breweries. Oh, and then there is one style that could have some problems for the foreseeable future, not just in Colorado, but nationwide.

Crooked Stave
1. Sour Rosé
There’s a reason why companies spend millions on marketing budgets. It works. But marketing can come in other forms, too. All it takes is a creative mind to change people’s perceptions. That seems to be working with rosé beers, which are becoming a cool trend for a hot summer. For the most part, these beers are pink like the wines that inspired them, sparkly and gentle on the palate. Most are based on tart, German-style wheat beers like goses and Berliner weisses, and include subtle fruit or flowery notes. A couple of national brands have rolled out rosé beers, including Firestone Walker and the Bruery, but Crooked Stave was probably the first in Colorado. It launched Sour Rosé in cans in the early spring and immediately sold out throughout the state. The 4.5 percent ABV wild ale is fermented in oak barrels with raspberries and blueberries, and has since been re-brewed. Renegade Brewing also has created its own rosé beer, and there are probably many more to follow.

Odell Brewing
2. Milkshake IPA
Made with milk sugar and lactose to give it a creamy, milkshake-like mouthfeel and appearance, this style also typically includes the kinds of sweet treats you would find in a milkshake: strawberries, peaches, chocolate, vanilla and mangoes, for example. Many milkshake IPAs are spinoffs of popular New England-style IPAs, which have tropical flavors, low bitterness and a hazy appearance. Dozens of Colorado breweries have tried their hands at this style over the past six months or so. Some of the best examples have come from River North Brewery, New Image Brewing, Fiction Beer Company, Outer Range, 4 Noses Brewing, Station 26, Cerebral and  Weldwerks. Odell plans to release a canned Milkshake IPA on August 16 at Freshcraft in Denver.

Platt Park Brewing Co.
3. Brut IPA
Late last year, the head brewer at San Francisco's Social Brewing sparked a new trend when he created an IPA that uses a specific enzyme to lighten the beer and give it a bubbly, effervescent mouthfeel, like Champagne, and a dry finish that comes from reducing the amount of sugar remaining in the finished product. The technique resulted in a beer that showcases hops flavors in a different way from standard IPAs. Social Brewing called the creation a "brut IPA," which quickly caught on in Northern California. The style made its way to Denver in May when three breweries — Fiction Beer, Femaentra and Platt Park — all released one in the same weekend. From there, many others have given it a shot, including Verboten, WestFax and Wiley Roots. The interesting spin on hoppy beers probably has a good chance of becoming its own officially recognized style at some point. 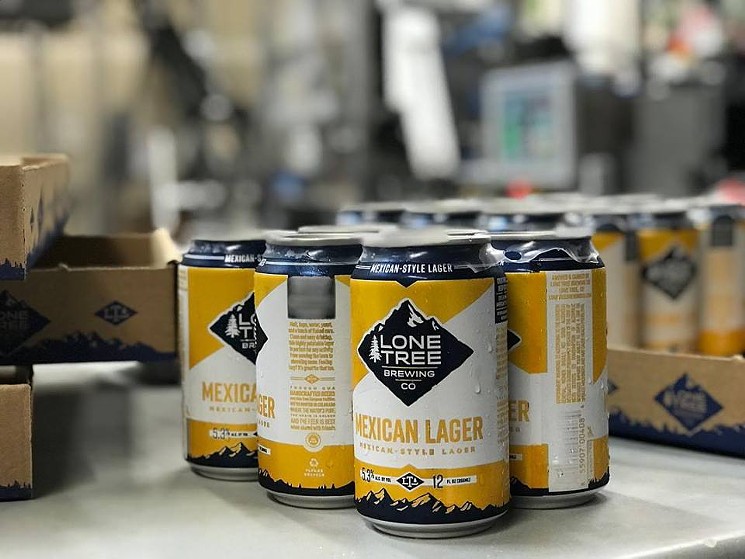 Lone Tree Brewing Co.
4. Mexican-Style Lager
Yes, Mexican lagers are ubiquitous and have been around forever. Corona, Tecate, Dos Equis and Pacifico are household names. Several large- and medium-sized craft breweries have have made their own solid — and very popular — versions in the past few years, as well, including Oskar Blues, Ska Brewing and Epic Brewing. And Lone Tree Brewing's version has won two Great American Beer Festival awards. Those awards didn't come in the Mexican lager category, however, because there isn't a Mexican lager category. That's because most Mexican lagers are offshoots of Vienna lager, which gained a foothold in Mexico in the 1860s when Austria's king claimed dominion over Mexico. Today, many smaller craft breweries are producing this lighter style, despite its association with mega-brewers. And their popularity is experiencing a craft resurgence. What's a good example? Well, tiny Hogshead Brewery, which specializes in English-style cask ales, plans to make one this September.

Route 44
5. Beer Slushies
Beer slushies first crossed my radar in April when Wiley Roots Brewing in Greeley got a slushie machine and began turning and churning out these new summer treats. Since then, several other breweries have followed suit, including Fiction Beer, Station 26 Brewing and Declaration Brewing. Beer slushies consist of beer — usually tart or sour ales — frozen and mixed with various fruit flavors like coconut and lime, peach, blackberry, orange and vanilla. This trend will likely continue through the summer. Will it be back in 2019? Hard to know. By then, something else may have caught the collective eye.

Station 26
6. Smoothie Sours
Kind of like the sour version of a milkshake IPA, smoothie sours are typically kettle soured beers made with fruit and lactose for a richer taste and smoother character. Recent local examples have come from Dry Dock Brewing, Cerebral Brewing, Fiction Beer, Station 26, Verboten Brewing, Something Brewery and Resolute Brewing, which created Fluffy the Lemon Slayer: Lemondrop Milkshake Sour, a 4.9 percent ABV beer brewed with three pounds per barrel of Lemondrop hops, lactose and a hint of vanilla — like liquid lemon meringue pie.

Avery Brewing
7. Electrolyte Beers
In early July, Avery Brewing unveiled Go Play IPA, a beer made with sodium and potassium, in addition to trendy hop varieties like Vic Secret, Idaho 7 and Simcoe. Why sodium and potassium? Because they are electrolytes often found in sports drinks. And although the Alcohol and Tobacco Tax and Trade Bureau (TTB) won't let breweries use the term "electrolytes" on the labels because of the implied health benefits, that's what's in them. Avery simply says the result makes "Go Play IPA the perfect beer to handle any sweaty situation." Dogfish Head was the first major brewery to make an electrolyte beer with its SeaQuench Ale, but there are also a couple of upstart companies that are brewing them and marketing them to runners and other athletes. They include the Sufferfest Beer Company, which makes its products at the Sleeping Giant contract brewing facility in Denver. It remains to be seen whether these will catch on, but we haven't heard the last of them.

Westword
And the one that's not:

CBD Beers
There's been a lot of buzz over the past years when it comes to beers that are infused with marijuana or with non-psychoactive CBD. But the truth is that marijuana beers aren't really beers if they don't have alcohol in them — at least not in my mind. And CBD beers? Well, they are hitting hurdles around every corner. Aurora's Dad & Dudes Breweria became the first brewery to win approval from the feds for a beer made with cannabidiol, which is made from hemp and doesn't get you high. But the Alcohol and Tobacco Tax and Trade Bureau tried to revoke that approval soon thereafter when the DEA decided to classify CBD as illegal. Dad & Dudes stopped making its CBD beer at that point, but a variety of other breweries across the country decided the test the waters without approval. Many, from Florida to California, were ordered to stop. There are still various ways to legality for CBD beers, the easiest of which would be if Congress reclassified hemp — a proposal that is now on the table. But it's not the only way, and Dad & Dudes and others are working on it. But for now, and possibly for some time into the future, CBD beers are illegal and therefore quite scarce.
KEEP WESTWORD FREE... Since we started Westword, it has been defined as the free, independent voice of Denver, and we'd like to keep it that way. With local media under siege, it's more important than ever for us to rally support behind funding our local journalism. You can help by participating in our "I Support" program, allowing us to keep offering readers access to our incisive coverage of local news, food and culture with no paywalls.
Make a one-time donation today for as little as $1.